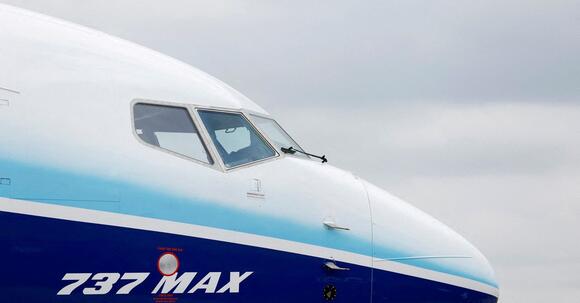 WASHINGTON, Nov 30 (Reuters) - A senior U.S. lawmaker wants details from the Federal Aviation Administration (FAA) about the safety of the cockpit alerting system for the Boeing 737 MAX -- an issue at the heart of a dispute over two new variants of the best selling airplane.

Cantwell told Reuters on Tuesday she had asked the FAA for additional information as she works to reach agreement on legislative language that would lift the deadline. "Safety should be the focus, not a date, safety," she said.

Boeing is seeking an extension from Congress of a Dec. 27 deadline imposing a new safety standard for modern cockpit alerts after two fatal 737 MAX crashes killed 346 people in Indonesia and Ethiopia and led to the plane's 20-month grounding.

A timely FAA response could help address concerns among some other lawmakers who oppose Boeing's request, potentially opening the way for an extension to be granted following months of discussions.

In a previously unreported Nov. 23 letter to the FAA seen by Reuters, Cantwell sought additional information on its certification of the Boeing 737 MAX fleet and compliance with the crew alerting requirements" by Dec. 5.

After Dec. 27, all planes must have modern cockpit alerting systems to be certified by the FAA, which could put the two new MAX planes future in jeopardy.

The FAA said it "was working on a response" to Cantwell's letter.

Lawmakers are discussing whether to include the provision in the House version of an annual defense bill, sources told Reuters.

Relatives of those killed in the crashes vehemently oppose to waiving the alerting requirements.

"How many people have to die for Boeing to be required to follow the law and install safe, modern flight crew alerting in their aircraft?" Michael Stumo, whose daughter died in the Ethiopian Airlines MAX crash, asked on Wednesday.

Boeing declined to comment but has said it is safer to have one common cockpit alerting system for all versions of the 737.

Acting FAA Administrator Billy Nolen told reporters earlier this month he did not view either version of the MAX as better. "There is no safer," Nolen said. "It's safe or it's not. If it is not safe, it should not be flying."

WASHINGTON, Feb 4 (Reuters) - The U.S. Federal Aviation Administration said on Saturday it had temporarily blocked civilian flights within 100 square miles over the Atlantic Ocean and around the South Carolina Coast, potentially setting the stage to shoot down a Chinese spy balloon.
WASHINGTON STATE・16 HOURS AGO
Reuters

U.S. Senate Democrats to push FTC to restrict marketing of guns to children

WASHINGTON, Feb 2 (Reuters) - A group of U.S. Senate Democrats will introduce legislation on Thursday directing the Federal Trade Commission to create rules banning the marketing of firearms to children, including the JR-15, which has become a target of gun control advocates.
MASSACHUSETTS STATE・2 DAYS AGO
Reuters

WASHINGTON, Feb 3 (Reuters) - A Chinese spy balloon has changed course and is now floating eastward at about 60,000 feet (18,300 meters) over the central United States, demonstrating a capability to maneuver, the U.S. military said on Friday, in the latest twist to a spying saga that led U.S. Secretary of State Antony Blinken to postpone a visit to China.
KANSAS STATE・1 DAY AGO
Reuters

ANKARA, Feb 3 (Reuters) - Turkey's airport ground service provider Havas told Russian and Belarusian airliners that it may stop providing services to their United States-origin aircraft, in line with Western sanctions against Moscow over its invasion of Ukraine.
1 DAY AGO
Reuters

(Reuters) - The United States and Russia faced off on Saturday over a World Health Organization report on the humanitarian crisis in Ukraine, with Moscow saying it was politically motivated and Washington calling for it to be swiftly updated.
WASHINGTON STATE・20 HOURS AGO
Reuters

KYIV, Feb 3 (Reuters) - Air raid alerts sounded in Kyiv and across Ukraine on Friday as a summit of European Union and Ukrainian leaders was due to begin in the country's capital.
2 DAYS AGO
Reuters

WASHINGTON, Feb 2 (Reuters) - U.S. Central Intelligence Agency Director William Burns said on Thursday that Chinese President Xi Jinping's ambitions toward Taiwan should not be underestimated, despite him likely being sobered by the performance of Russia's military in Ukraine.
WASHINGTON STATE・2 DAYS AGO
Reuters

TOKYO, Feb 3 (Reuters) - Micronesia aims to 'soon' sign an extension of its economic and security pact with the United States, its President David Panuelo said on Friday, a deal seen as important in Washington's efforts to counter Chinese influence in the Pacific.
WASHINGTON STATE・2 DAYS AGO
Reuters

WASHINGTON, Feb 3 (Reuters) - President Joe Biden on Friday hailed a jobs report that showed 517,000 jobs were created in January and unemployment fell to 3.4%, its lowest rate in 54 years, as evidence that his economic plan is strengthening the U.S. economy.
WASHINGTON STATE・1 DAY AGO
Reuters

TOKYO, Feb 5 (Reuters) - Washington has suggested deploying medium-range missiles in Japan as part of a plan to bolster defences against China along the East and South China Seas, the Sankei newspaper reported on Saturday citing unidentified people involved with U.S.-Japan relations.
WASHINGTON STATE・2 HOURS AGO
Reuters

SHANGHAI, Feb 4 (Reuters) - China's foreign ministry said on Saturday that flight of a Chinese "airship" over the United States was a force majeure accident, accusing U.S. politicians and media of taking advantage of the situation to discredit China.
WASHINGTON STATE・1 DAY AGO
Reuters

(Reuters) - The U.S. is considering new sanctions on Chinese surveillance companies over sales to Iran’s security forces, the Wall Street Journal reported on Saturday citing people familiar with the matter.
1 DAY AGO
Reuters

Honda issues 'Do Not Drive' warning for 8,200 U.S. vehicles over air bag risks

(Reuters) - The European Union’s ban on imports of Russian refined oil products, including diesel and jet fuel, will disrupt global flows once it takes effect on Sunday and could hurt Moscow more than an embargo on crude oil.
2 DAYS AGO