By Alicia Vitarelli via
6abc Action News
2022-12-01
In the wake of the Taylor Swift concert ticket controversy, a lot of memes emerged, many poking a bit of fun at what's turned out to be a serious investigation into Ticketmaster. One of them suggested that getting tickets to Swift's upcoming "Eras" tour was as hard as finding a golden ticket in a Willy Wonka chocolate bar. One Atlantic City eatery took that concept and ran with it. Bar32 Chocolate & Cocktails created 3,000 special holiday edition Taylor Swift chocolate bars. On Christmas morning, one of those bars will have a winning number inside -- good for two golden tickets to see Swift at Lincoln Financial Field on May 13. 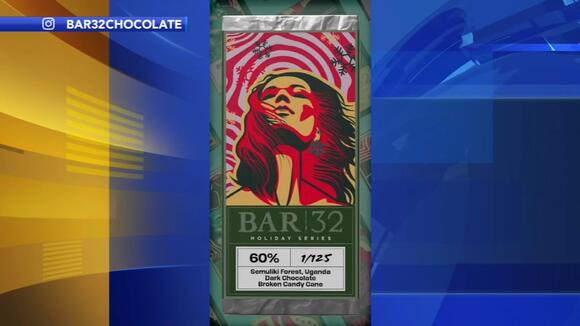 "No one can buy these tickets, so we said let's stick it inside of a chocolate bar for the holidays because you could give every kid or teenager or even adult a chance to win an opportunity to get two tickets to see this concert right in their backyard," says Lee Sanchez, partner and chocolatier at Bar32 Chocolate & Cocktails. The Taylor Swift holiday bar is dark chocolate and crushed peppermint. They're $10 each. But consider this - resale tickets to the show are at least $600. Each wrapper is also encrypted and secure. "Every bar has a secret number inside of the wrapper," Sanchez explains. "That wrapper is tracked and tied directly to the order that someone made. That ticket is tied directly to the person who bought it." Considering there was no general sale for these shows and that the Pennsylvania Attorney General's office is investigating this debacle, this might be worth a shot. And hey, you're supporting a local business. The winner will be announced live on Bar32's Instagram account on Christmas morning.

He was one of the most popular teen idols in the history of entertainment. As the star of the 1970s hit TV series, The Partridge Family, he rocketed to fame and then died too young.
17 HOURS AGO
6abc Action News