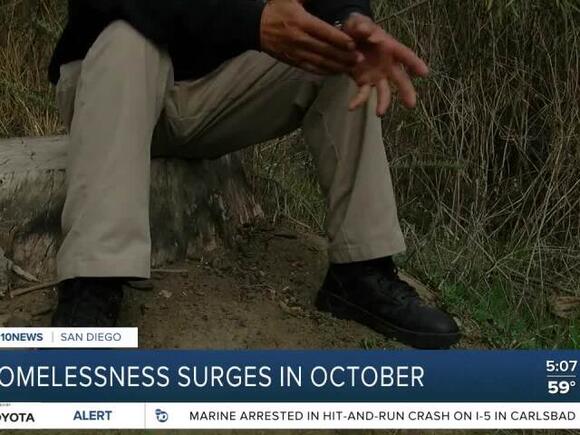 The Regional Task Force on Homelessness says for every person who found housing in our community in October, two more became homeless. You can see this just steps away from the Fashion Valley Mall, where more than 400 people live in the nearby riverbed. That's a sizable jump from the beginning of the year.

ABC10 News spoke to a man who's been homeless in San Diego for three years. He didn't want to show his face or give his name because none of his nine kids know he's been living on the streets. He says rising living costs make it difficult for many unhoused people to find stability.

He makes ends meet by working as a handyman, and gets most of his food from local food banks.

"My kids still call me and say 'hey dad we're a little bit short,'" he said. "I'll go straight to Western Union or whatever and send them money."

He says he's been searching for years, trying to find one thing.

This comes as the Regional Task Force on Homelessness held its first ever 'Solutions for San Diego' conference on Wednesday. Recent data shows only 674 of San Diego's more than 4,000 homeless people found housing last month.

That's the lowest monthly number in more than a year. But many people on the streets are clinging on to hope.

"Being religious, he always makes sure I've got what I need," he said.

The San Diego River Park Foundation is holding its annual sock drive Saturday at its office on Pacific Drive, supporting all of the homeless people living on the riverbed and helping connect them to housing services. You can visit the foundation's website if you want to donate or see more information.

Two businesses are collaborating to support black youth. They’ll be raising money for one nonprofit throughout this month.
SAN DIEGO, CA・2 DAYS AGO
ABC 10 News KGTV

Marc Glazer says he noticed a sinkhole near his property line in June of 2021. Despite repeated requests, he says the City of San Diego has not made progress towards fixing the problem.
SAN DIEGO, CA・1 DAY AGO
ABC 10 News KGTV

Watching the news is currently the main way many with ties to Turkey are getting information about their home country after a 7.8 earthquake devastated the region.
SAN DIEGO, CA・18 HOURS AGO
ABC 10 News KGTV

Supervisors unanimously called for the development of a comprehensive plan to respond to a possible influx of asylum seekers in light of the potential lifting of the federal Title 42 policy.
SAN DIEGO COUNTY, CA・9 HOURS AGO
ABC 10 News KGTV

People across San Diego are doing what they can to help the earthquake victims in Turkey and Syria. It's estimated 5,000 Turkish Americans live in San Diego county, a small but tight group.
SAN DIEGO, CA・8 HOURS AGO
ABC 10 News KGTV

The breach affected patients who paid a bill or invoice through the online payment service between August 12, 2021 and January 12, 2023.
SAN DIEGO, CA・1 DAY AGO
ABC 10 News KGTV

Just in time for Valentine’s Day, OpenTable released its list of their 100 Most Romantic Restaurants in America for 2023 -- and three San Diego eateries are getting tons of love from reviewers.
SAN DIEGO, CA・1 DAY AGO
ABC 10 News KGTV

While natural gas prices in California have returned to a fairly normal rate, some San Diego city leaders believe there are unanswered questions as to how and why prices doubled this winter.
SAN DIEGO, CA・13 HOURS AGO
ABC 10 News KGTV

Biden's visit is part of a California trip in support of the administration's efforts regarding cancer treatment and initiatives for military and veteran families.
SAN DIEGO, CA・4 DAYS AGO
ABC 10 News KGTV

After her high school friend died unexpectedly in August, Randi Wittak made dozens of bears from her friend's clothing.
BONITA, CA・2 DAYS AGO
ABC 10 News KGTV

A United Airlines flight was forced to return to San Diego International Airport Tuesday morning after a fire was reported on the plane.
SAN DIEGO, CA・16 HOURS AGO
ABC 10 News KGTV

Millions of dollars in federal funding is expected to make waves in Imperial Beach. The city’s new mayor is hopeful that money will solve problems with pollution in the water.
IMPERIAL BEACH, CA・8 HOURS AGO