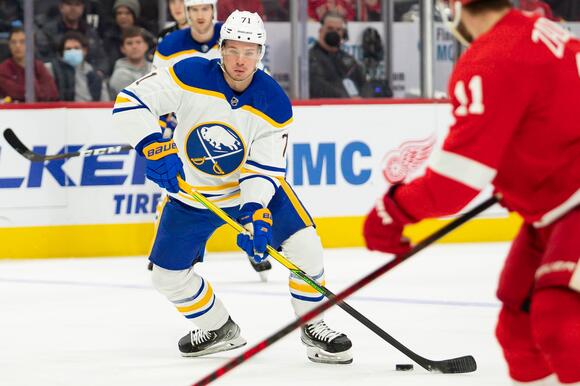 Detroit, Mich. (WGR 550) - The Buffalo Sabres' busy week continues into Detroit on Wednesday night, where the blue and gold are visiting the Red Wings inside Little Caesars Arena.

The home team opened the scoring just 80-seconds into this affair, as Red Wings rookie forward Jonatan Berggren netted his second-career goal to make it 1-0 Detroit.

The Sabres tied the game three-and-a-half minutes later, when Dylan Cozens continued his strong start to the 2022-23 campaign. Cozens, with help from netminder Craig Anderson, potted a short-handed goal to even the score at a goal apiece.

It was Cozens' seventh goal of the season.

The blue and gold made it two goals in a row 8:25 into the first period of play. A shot from defenseman Mattias Samuelsson leaked through Red Wings goalie Alex Nedelkjovic, and marked a milestone for the young blue-liner. In his 64th-career game, Samuelsson had goal number one.

The Sabres kept the line moving in the middle stanza, as their run of unanswered goals grew to four against Nedelkjovic and company. 8:12 in, Cozens struck for the second time in the game on a whale of a wrist shot under the bar. Two minutes later, Jeff Skinner's wraparound got in under Nedelkjovic for the veteran's 11th goal of the campaign.

Overtime:
BUF: NONE
DET: NONE

Overtime:
BUF: NONE
DET: NONE

The Buffalo Sabres announced on Tuesday they have come to terms on a seven-year, $49.7 million contract extension with center Dylan Cozens. Starting next season, Cozens will average $7.1 million per-season. Paul Hamilton has more:
BUFFALO, NY・21 HOURS AGO
WGR550

Just when I thought I was out, Sabres pull me back in

The Buffalo Sabres have the longest current playoff drought in the NHL, but they are trending up and their fans are taking notice. You may have left a few years ago, but I bet you are back. Howard Simon shares more thoughts:
BUFFALO, NY・1 DAY AGO
WGR550