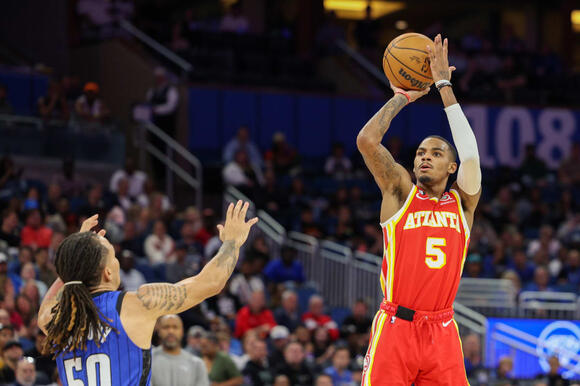 Summary, stats, and highlights from the NBA game between the Atlanta Hawks and Orlando Magic.

The Atlanta Hawks were short-handed entering Wednesday night's game against the Orlando Magic. Jalen Johnson (ankle) and Justin Holiday (health & safety protocols) were both out of action. In addition, halfway through the first quarter, De'Andre Hunter exited the game after taking a blow to the thigh on a defensive play.

Despite being without three key players, Atlanta cruised through the first half, outscoring Orlando 70-50. But as luck would have it, John Collins sprained his ankle after finishing an alley-oop after time expired in the second quarter.

The game was never in question, as Atlanta enjoyed a big lead for most of the game. But the team's depth took a major hit tonight.

Hawks coach Nate McMillan cleared the bench, but Aaron Holiday only played 1:21. Frank Kaminsky (6:39) was the only other player to log fewer than ten minutes. With the vacuum at the forward spot, Jarrett Culver logged almost 30 minutes.

Trae Young and Dejounte Murray scored 30 and 27 points, respectively. However, Young's outside shooting and Murray's turnovers are still an issue.

Atlanta beat a rebuilding team tonight, and a win is a win. But the team's problems remain the same. On Friday night, the Denver Nuggets roll into State Farm Arena. Stay locked into AllHawks.com for news, updates, and analysis.

The Kyrie Irving trade figures to be a consequential move this NBA season. The effects of that trade may have further impacts than just the players involved, as well. Brooklyn Nets star Kevin Durant tied his wagon to Kyrie when they both joined the team. Now that one is out, the other may follow. Chris Read more... The post NBA world reacts to huge Kevin Durant news appeared first on The Comeback: Today’s Top Sports Stories & Reactions.
PHOENIX, AZ・12 HOURS AGO
Larry Brown Sports

Kyrie Irving is the obvious star of the NBA news cycle right now, but Spencer Dinwiddie is proving to be a worthy supporting act. The Brooklyn Nets guard Irving was officially traded to the Dallas Mavericks on Sunday in a blockbuster deal. Dinwiddie and multiple other assets will be headed back to Brooklyn as part... The post Spencer Dinwiddie goes viral for funny tweet about being traded for Kyrie Irving appeared first on Larry Brown Sports.
ONTARIO, NY・13 HOURS AGO
Larry Brown Sports

Kyrie Irving terrorized Joe Tsai’s Brooklyn Nets for nearly four seasons, and it sounds like the Nets owner got the last laugh with the problematic guard. On Friday we learned that Irving wanted to be traded by the Nets ahead of Thursday’s deadline. Immediately, there was speculation that Irving would end up with the Los... The post Nets owner got last laugh with Kyrie Irving through petty move appeared first on Larry Brown Sports.
NEW YORK CITY, NY・7 HOURS AGO
FastBreak on FanNation

Here's What Spencer Dinwiddie Tweeted After Getting Traded

Spencer Dinwiddie sent out a tweet after he was traded from the Dallas Mavericks to the Brooklyn Nets.
DALLAS, TX・12 HOURS AGO
OnlyHomers

There have been a number of sad reports coming out of the world of professional wrestling in recent weeks, with former stars passing away, both during their career and following it.
14 HOURS AGO
FastBreak on FanNation

On Sunday, the Los Angeles Lakers announced that they have assigned rookie guard Max Christie to the South Bay Lakers in the NBA G League.
LOS ANGELES, CA・15 HOURS AGO
All Hawks

Summary of the Atlanta Hawks 115-108 win over the Utah Jazz.
ATLANTA, GA・2 DAYS AGO
All Hawks

Five Players the Atlanta Hawks Must Avoid at Trade Deadline

Summary of the Denver Nuggets' 128-108 win over the Atlanta Hawks.
ATLANTA, GA・1 DAY AGO
All Hawks