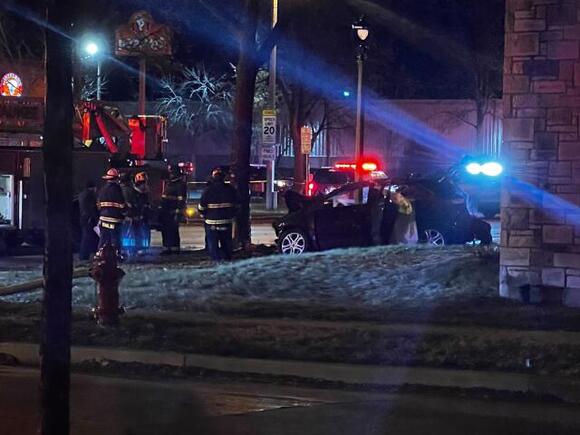 Two people have died following a fiery crash Wednesday night. The crash happened near 29th and Capitol around 7:45 p.m., according to police.

An unidentified driver was going east on Capitol Drive when police say the car collided with a tree after the driver lost control. That crash resulted in a vehicle fire.

Police said both the driver and the passenger in the vehicle died on the scene. According to the Milwaukee County Medical Examiner's online database, one of the victims was a 29-year-old man and the other was a 39-year-old man.

An investigation is underway and MPD said it's working to identify the victims.

this is devastating two young people have lost their lives again. Allow your decision making to keep you alive. please slow down Let this be a lesson learned. praying for peace and healing for families across Milwaukee right now

Bad enough we have a huge gun culture problem, now their using vehicles as weapons. Zero regard for human life.

Milwaukee firefighters responded to a house on fire near 57th and Sheridan early Monday morning, according to a spokesperson.
MILWAUKEE, WI・8 HOURS AGO
TMJ4 News

Milwaukeeans joined others in a nationwide show of solidarity following the death of Tyre Nichols in Memphis.
MILWAUKEE, WI・9 HOURS AGO
TMJ4 News

Milwaukee police are searching for a suspect after they say someone drove off with an unlocked car with a one-year-old child in the backseat and then crashed, killing the child.
MILWAUKEE, WI・4 HOURS AGO
TMJ4 News

One killed in shooting near 36th and Lisbon

The shooting happened near 36th and Lisbon around 6:28 a.m. According to Milwaukee police, the victim, a 46-year-old man, died on the scene.
MILWAUKEE, WI・2 DAYS AGO
TMJ4 News

Two people have been killed in separate crashes along the same Milwaukee street in the last 10 days. Milwaukee police say the two men who were killed were both in vehicles running red lights.
MILWAUKEE, WI・2 DAYS AGO
TMJ4 News

The Racine Fire Department was dispatched to a house fire just after 4 a.m. on Sunday. A 74-year-old man was killed in a house fire in Racine that also left two others injured.
RACINE, WI・1 DAY AGO
TMJ4 News

One-year-old killed in crash near 35th and Hope

A one-year-old boy has died after a two-vehicle crash in Milwaukee late Friday night. The driver of the vehicle he was in has been arrested.
MILWAUKEE, WI・2 DAYS AGO
TMJ4 News

The Milwaukee Police Department is warning of a "crime trend" of armed robberies and car break-ins occurring in the city's downtown entertainment areas.
MILWAUKEE, WI・2 DAYS AGO
TMJ4 News

A 59-year-old Milwaukee woman was shot and killed near 15th and Becher on Thursday. The homicide happened around 8 p.m. The woman died from her injuries at the scene.
MILWAUKEE, WI・3 DAYS AGO
TMJ4 News

MPA responds after 4 Milwaukee officers arrested, charged with crimes in a week

The 46-year-old man accused of shooting at a Milwaukee home eight times while people were inside has been released from jail after posting bail.
MILWAUKEE, WI・2 DAYS AGO
TMJ4 News

A crash involving several vehicles shut down northbound lanes of I-41/94 in Kenosha County, just north of the state line, on Friday.
KENOSHA COUNTY, WI・3 DAYS AGO
TMJ4 News

An 11-year-old child was shot near 65th and Silver Spring on Wednesday. Police say the Milwaukee boy was shot around 6:15 p.m. He was taken to a local hospital with non-fatal injuries.
MILWAUKEE, WI・4 DAYS AGO
TMJ4 News

One killed in two-vehicle crash near Sherman and Roosevelt

One person has died and three are injured following a two-vehicle crash in Milwaukee early Thursday morning.
MILWAUKEE, WI・4 DAYS AGO
TMJ4 News

TMJ4's Bruce Harrison spoke with Gene Mears, the half brother of Grant Forbes. Forbes' body was found in a burnt building near 26th and Greenfield on Jan. 4.
MILWAUKEE, WI・4 DAYS AGO
TMJ4 News

Wisconsinites brace for snowy road conditions through the weekend

After a mild start to the year snow is finally falling in southeastern Wisconsin. But with that beautiful winter scene comes slick and icy roads and dangerous conditions for drivers.
MILWAUKEE, WI・1 DAY AGO
TMJ4 News

Highs only climb into the single digits and teens on Monday, with a high of 12° in Milwaukee. Wind chills will range from -15° to -5° through the day with northwest winds 10-15 mph.
MILWAUKEE, WI・9 HOURS AGO