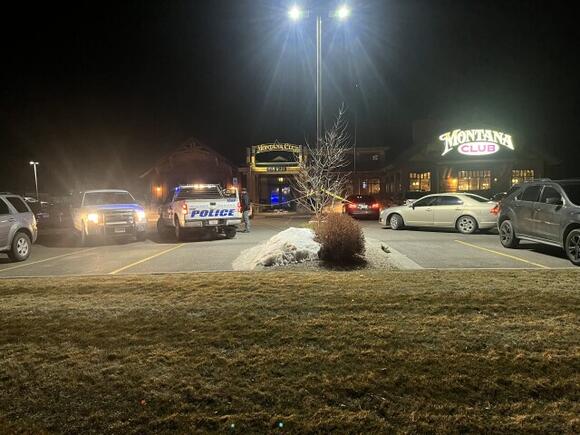 The man who shot an unruly patron outside the Montana Club in Billings Wednesday night was not affiliated with law enforcement, contrary to initial reports, Billings Police Lt. Matt Lennick said Thursday.

Lennick said in an email to MTN News that a retired Wyoming law enforcement officer was initially identified as the shooter by callers and bystanders.

While the retired officer was at the scene, police determined another patron, who was not involved with law enforcement, fired the bullet that struck the 35-year-old patron the in chest, according to Lennick.

No one has been arrested. Lennick did not identify any of the involved parties.

An unruly patron was shot by a retired Wyoming law enforcement officer Wednesday night outside the Montana Club after he waved a gun at him in the parking lot, according to Billings police.

Lt. Bret Becker told Q2 News that the 35-year-old man was arguing with staff at the restaurant around 5:40 p.m. at 1791 Majestic Lane when he was escorted out by the retired officer, who was also eating there.

In the parking lot, the patron reached into his vehicle and grabbed a gun, Becker said. The retired officer pulled out his concealed weapon, and a scuffle ensued, according to Becker.

The retired officer shot the man in the chest, and he was taken to a Billings hospital. His condition was not available Wednesday night.

No arrests have been made, and Becker said the retired officer is cooperating with the investigation.

The Montana Club did not close during the incident.

The man who shot the patron told authorities at the scene that he was a retired law enforcement officer from Wyoming, Lt. Bret Becker said.

He is currently not working for Billings police or from the area, Becker said.

The man was not arrested but is working with police, Becker said.

Billings police are investigating a shooting outside the Montana Club restaurant in Billings Wednesday night.

A 35-year-old patron was arguing with staff at the restaurant at 1791 Majestic Lane and was escorted outside around 5:40 p.m., police said in a tweet.

The patron was armed and approached outside by another person with a gun, Sgt. Bret Becker told MTN News at the scene.

The patron was shot in the chest and taken to a local hospital, Becker said.

This is a developing story. Check back for details.

in the first part of the article it says the patron(who was shot in the chest) was arguing with staff, then later it says he was arguing with customers, so which is it? better get that straight. Secondly, it says, customer(from WY) was showing his gun, the patron reaches in his car and shows his gun but too late because he's (i.e., patron) shot but actually they are both patrons but the one has a concealed weapon and is a retired WY law enforcement and the other is a regular Joe schmoe, but probably DOA is my bet, after all its a chest wound and unless they do some immediate blood clotting, he's apt to bleed out rapidly. so very sad for this family regardless of his "behavior". No one should be shot for unruly behavior and the guy hadn't shown a weapon until he got it from his car and that didn't occur till he was outside after being marched out to it!

The Layhers were leaving Pizza Ranch on Dec. 27 when their SUV was struck by a speeding vehicle on Main Street, causing their vehicle to roll. The mother, Jessica, was just released from the hospital.
BILLINGS, MT・15 HOURS AGO
Q2 News

A man prosecutors say was shot by a woman during an attempted robbery in a Billings alley was arraigned Wednesday in Yellowstone County District Court.
BILLINGS, MT・34 MINUTES AGO
Q2 News

The facility on Airport Road is here to change that, complete with four Blackhawk helicopters and 13 full-time National Guard members.
BILLINGS, MT・16 HOURS AGO
Q2 News

She's no Superhero or even a non-profit, but on many Sundays you'll find "Wander Woman" around downtown Billings handing out much-needed food and supplies.
BILLINGS, MT・1 DAY AGO
Q2 News

Their mailbox is on the side of their home, down the driveway. While the fence is closing off all of their front yard.
BILLINGS, MT・16 HOURS AGO
Q2 News

Dolly Moore wrote on Twitter that she saw a jet go by and then heard what she described as an explosion in the sky.
BILLINGS, MT・4 DAYS AGO
Q2 News

Details of the harrowing crime were released Thursday in court records charging a 32-year-old man with not only shooting two people but then attempting to rape one of the victims.
BILLINGS, MT・5 DAYS AGO
Q2 News

A man accused of a Jan. 8 crime spree in Billings that left one man dead, another man seriously injured and numerous vehicles damaged or destroyed was arraigned Friday.
BILLINGS, MT・4 DAYS AGO
Q2 News

The Montana Women’s Run began in 1982 with 200 registrants and celebrated last year with over 4,600 women participating virtually around the world.
BILLINGS, MT・5 DAYS AGO
Q2 News

In Billings, police issued 268 red light citations in 2022 and 169 warnings, and they say there are far more people breaking the red-light law.
BILLINGS, MT・7 DAYS AGO
Q2 News

Tony Seitz started crafting unique beehive boxes after taking up beekeeping with his son. He has been retired since 2009 and enjoys creating the colorful boxes as a hobby.
BILLINGS, MT・6 DAYS AGO
Q2 News

The Pentagon confirms a strange object spotted in the sky over Billings on Wednesday was a Chinese spy balloon. The balloon had apparently been over the northern U.S. for the past several days.
MONTANA STATE・5 DAYS AGO
Q2 News

Dolly Moore wrote on Twitter that she saw a jet go by and then heard what she described as an explosion in the sky.
BILLINGS, MT・4 DAYS AGO
Q2 News

The bakery served oven-fired pizza and was busy all night helping to make food deliveries to the nearby hotels and motor inns that were also busy accommodation travelers.
BILLINGS, MT・7 DAYS AGO
Q2 News

The Education Foundation feeds at least 700 kids a week with its teen pantry, elementary pantry, and BackPack Meals programs.
BILLINGS, MT・1 DAY AGO