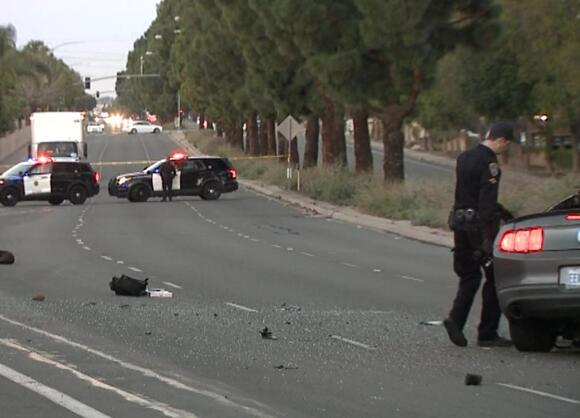 Silvia Isabel Licona, of San Diego, was identified as the deceased, the San Diego County Medical Examiner’s Office stated on its website.

Pedestrian killed in I-805 crash identified

The collision occurred on Nov. 15 around 3:30 a.m. in the 7700 block of Mira Mesa Boulevard, near Parkdale Avenue, according to San Diego police. For unknown reasons the vehicle she was driving lost control in the eastbound lane, causing her car to veer into the center median before striking a tree and overturning.

Licona managed to remove herself from the car and collapsed to the street, police said. She was later pronounced dead when first responders arrived at the scene.

An 18-year-old woman was injured in an accident Sunday night, after her vehicle rolled over into a La Mesa apartment complex parking lot.
LA MESA, CA・1 DAY AGO
FOX 5 San Diego

After a recent string of attacks reported in Downtown San Diego, residents and businesses are on guard as law enforcement stress caution, alertness and mindfulness of one's surroundings.
SAN DIEGO, CA・17 HOURS AGO
FOX 5 San Diego

Arson investigators are looking into a blaze that began at a strip mall in El Cajon early Sunday, after a fire spread from several pallets to a nearby business.
EL CAJON, CA・1 DAY AGO
FOX 5 San Diego

Authorities have identified a man who died as a result of a Friday night shooting spree that left three others injured in San Diego.
SAN DIEGO, CA・2 DAYS AGO
FOX 5 San Diego

A skydiver continues to recover after he fell from the sky, hitting a home last week in Oceanside.
OCEANSIDE, CA・20 HOURS AGO
FOX 5 San Diego

An 8-year-old boy is recovering in the hospital after he sustained a serious traumatic brain injury in a trampoline accident.
CARLSBAD, CA・20 HOURS AGO
FOX 5 San Diego

Second arrest made in shooting death of man near Petco Park

A second suspect has been arrested in connection to the shooting death of a man near Petco Park earlier this month, said authorities.
SAN DIEGO, CA・2 DAYS AGO
FOX 5 San Diego

The driver of a vehicle that crashed into a tree in Oceanside, which resulted in the death of the 31-year-old as well as a six-year-old girl passenger, was identified, medical officials said.
OCEANSIDE, CA・4 DAYS AGO
FOX 5 San Diego

Carlsbad police on Monday arrested a San Bernardino woman on suspicion of stealing items from a chain store, said the agency in an announcement on Friday.
CARLSBAD, CA・3 DAYS AGO
FOX 5 San Diego

Authorities are asking for the public's helping in identifying and locating the suspect or suspects responsible for vandalizing a church in the Birdland neighborhood.
SAN DIEGO, CA・4 DAYS AGO