WSDOT: Camp Hope down to 433 people, state looking for housing 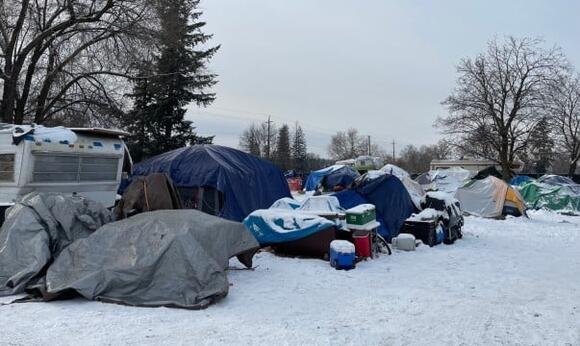 SPOKANE, Wash. — As the Washington State Department of Transportation looks to find housing for people at Camp Hope, they released statistics on the camp for the winter.

WSDOT says as of November 25, there are 433 people living at Camp Hope. There were 467 people living there according to a census on November 4, meaning the camp population has shrunk by seven percent in November.

Of the people living at the camp, 60 percent of them are male, 39 percent are female, 42 percent have a self-reported disability, and 389 were from the greater Spokane area, according to WSDOT.

The state says they are looking to transition those living at the camp into appropriate shelter and housing, but there isn’t enough housing in Spokane to meet the need at this time.

According to state comprehensive data, there are over 5,200 people experiencing homelessness in Spokane County, with most shelters at capacity.

WSDOT is currently in step three of its four-step plan to clear Camp Hope. After stabilizing and securing the site, WSDOT is now looking to house Camp Hope’s occupants before closing, cleaning, and restoring the area.

READ: ‘There is no preparing for it’: Camp Hope braces for Wednesday’s winter storm

READ: ‘Why has it taken this long?’: Spokane city, county officials give updates on Camp Hope

most are addicts and/or crazy. they won't accept help. jewels helping hands is responsible for this mess and should be investigated and put out of business. Garcia needs to be jailed for fraud and abusing the vulnerable.

My brother lives in his motorhome. He has a good job, but just chooses to live in his camper. But he doesn't live on private property either. He has a spot at a friend's. He is perfectly comfortable. My point is, these people choose this. There is a 1 hour documentary called Seattle is dying. It's worth a watch.

Can you imagine the cleanup detail?! Disgusting!! I drove by the place to see how it really looked and it was so nasty. Huge piles of garbage and there were people wandering around mumbling to themselves. I doubt there are any landlords who would want any of these people living in their rentals.

WSDOT: Camp Hope down to around 138 people

According to WSDOT, Camp Hope is down to about 138 people now, down 60 from their previous snapshot count.
SPOKANE, WA・12 DAYS AGO
KXLY.com | 4 News Now

SPOKANE, Wash. — The Spokane City Council is voting to defer a landlord-tenant ordinance following the repair of a software glitch preventing City Council from providing virtual testimony. The City says Landlord-Tenant Ordinance 36330 is designed to increase and improve rental housing inventory in Spokane, benefiting both tenants and landlords. They also say the deferral is based on advice given...
SPOKANE, WA・9 DAYS AGO
KXLY.com | 4 News Now

SPOKANE, Wash. — Salvation Army Spokane is asking for help providing clothes to local shelters in the area. The Trent Resource and Assistance Center (TRAC) and Cannon shelters were recently added, and Spokane Salvation Army is asking for gently used or new clothes for them to wear. Some of the kinds of clothing they are asking for include the following:...
SPOKANE, WA・9 DAYS AGO
KXLY.com | 4 News Now

SPOKANE, Wash. — The cost of child care continues to put a strain on Washington families everywhere. Statewide, the average cost is $1,044 per child every month. The average household income in Spokane averages out around $60,000, meaning childcare eats into roughly 20% of that collective income. Part of the problem stems from a staffing shortage that’s putting pressure on...
WASHINGTON STATE・12 DAYS AGO
KXLY.com | 4 News Now

SPOKANE, Wash. — The Spokane Fire Department put out a garage fire that prevented further damage at a home in North Spokane early Saturday morning. SFD responded to reports of a garage fire on North Victor Street in between West Lyons Avenue and West Houston Avenue. Firefighters who got to the scene found a working fire in a connected garage...
SPOKANE, WA・10 DAYS AGO
KXLY.com | 4 News Now

SPOKANE, Wash. — The homeless issues that plague our community reach far and wide. We’ve covered it extensively, and now, those representing Washington state in this year’s legislative session are also discussing it and working to find solutions. Senate Bill 5202, discussed in Wednesday’s public hearing is looking to put $4 billion towards the issue. SB 5202 would address housing...
SPOKANE, WA・13 DAYS AGO
KXLY.com | 4 News Now

SPOKANE VALLEY, Wash. — A person died late Friday night after Washington State Patrol (WSP) said they lost control of a motorcycle and was hit by an oncoming vehicle in Spokane Valley. The crash happened just before midnight. WSP said the motorcycle driver was on the Sprague Ave. onramp to westbound Interstate 90 when they lost control and hit the...
SPOKANE VALLEY, WA・10 DAYS AGO
KXLY.com | 4 News Now

SPOKANE, Wash. – 1 person was found dead after a fire broke out at a home on the corner of south Stevens Ave. and east A St. in Deer Park.  Spokane County Fire Districts 4 and 9 are currently on the scene, and have put the fire completely out. The home is heavily damaged. The Spokane County Sheriff’s Office is...
DEER PARK, WA・11 DAYS AGO
KXLY.com | 4 News Now

SPOKANE, Wash. – A fire broke out at a home on 402 E A St. on Friday, Jan. 20. Emergency crews responded to the scene at around 3:40 a.m. 4 News Now has a team on the scene to gather more information. This is a developing story, check back for updates.  COPYRIGHT 2022 BY KXLY. ALL RIGHTS RESERVED. THIS MATERIAL...
SPOKANE COUNTY, WA・11 DAYS AGO
KXLY.com | 4 News Now

SPOKANE VALLEY, Wash. — People living in a community near Spokane Valley say they’re seeing more car crashes and fires than ever before. Now, the Spokane Valley Fire Department says it needs another four years of support from voters to continue saving lives. “Spokane is growing. It isn’t getting any smaller, and we’re going to need them around…more traffic, more...
SPOKANE VALLEY, WA・15 DAYS AGO
KXLY.com | 4 News Now

SPOKANE, Wash. — The downtown stadium on Boone is starting to take shape, despite dealing with cold weather and supply chain issues. The construction manager says there are new additions being built on site right now, from concrete floors to steel structures. “Right now we don’t see any procurement issues coming our way. We worked hard with partners pouring concrete...
SPOKANE, WA・14 DAYS AGO
KXLY.com | 4 News Now

SPOKANE, Wash. — Spokane, are you ready to try this week’s Crumbl Cookie menu? The cookie chain is opening on Friday in north Spokane! You can find it at 7808 N Division Street from 8 a.m. to 10 p.m. on Monday-Thursday, and 8 a.m. to midnight on Friday and Saturday. This week’s menu features an Oreo Chocolate Crumb, Honey Bun,...
SPOKANE, WA・12 DAYS AGO
KXLY.com | 4 News Now

SPOKANE VALLEY, Wash. — Spokane Valley firefighters quickly put out a fire inside an apartment complex Wednesday afternoon. The fire broke out at the Woodruff Heights Apartments around 5:50 p.m. According to SVFD, the fire was contained to a trash can located inside an apartment. No one was injured in the fire. READ: SVFD asks community to pass upcoming levy...
SPOKANE VALLEY, WA・13 DAYS AGO
KXLY.com | 4 News Now

LIBERTY LAKE, Wash — On Thursday, parents gathered at Ridgeline High School for an Information Night on School Safety. For Maria Garcia-Bachman, safety is top of mind when she sends her kids to school. One of them goes to school completely online, the other has a hybrid schedule, because of safety concerns. ” that my kids will be shot at...
LIBERTY LAKE, WA・11 DAYS AGO
KXLY.com | 4 News Now

The department is one of the first one hundred agencies to begin implementing virtual reality into its training methods.
SPOKANE, WA・12 DAYS AGO
KXLY.com | 4 News Now

SPOKANE, Wash. — The Spokane Sheriff’s Office announced that 12-year-old Mackenzie Hale-Stenzel has been found and safe. She was reported missing around 8:30 p.m. Thursday night. COPYRIGHT 2022 BY KXLY. ALL RIGHTS RESERVED. THIS MATERIAL MAY NOT BE PUBLISHED, BROADCAST, REWRITTEN OR REDISTRIBUTED.
SPOKANE VALLEY, WA・11 DAYS AGO