‘The only thing that’s going to heal is love’: Victims’ parents share memories at vigil for murdered Idaho students 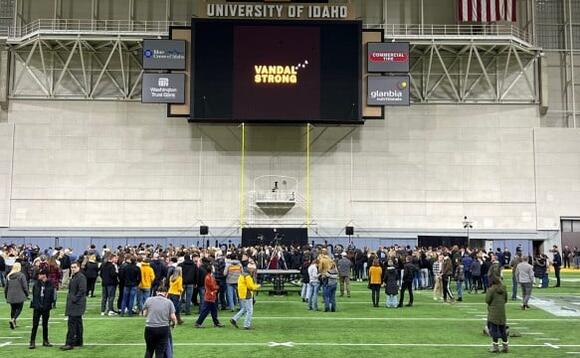 MOSCOW, Idaho – In a place typically reserved for football games and celebration, University of Idaho students, families and supporters gathered in the Kibbie Dome Wednesday to honor the memory of four murdered students.

Xana Kernodle, Ethan Chapin, Madison Mogen and Kaylee Goncalves were stabbed to death in a home just off campus on November 13th.

The killer has not been identified.

The murders sent shockwaves through this tight-knit college community.

Because of Thanksgiving break, Wednesday was the first time the community could gather.

At the vigil, three of the victims’ parents told those gathered about the children they lost.

Stacy Chapin, Ethan’s mom, told of his love of country music and that he “tolerated” going to class.

Ethan was a triplet and all three Chapin siblings attended U of I.

“We all agreed, yes, this school is perfect for us, it feels right,” she said, of her kids choosing U of I.

Stacy spoke of the close relationship the family shared and that “the three kids even had their wisdom teeth pulled together.”

“We are eternally grateful that we spent so much time with him,” she said, through tears. She encouraged those gathered to spend as much time as they can with the people they love.

“It’s really important that all you kids… you have to put your energy back into your goals,” she said.

Chapin thanked law enforcement for their continued efforts and expressed condolences to the other families impacted.

Through tears, Kaylee Goncalves’ father Steve Goncalves told the group about his daughter, joking that she wouldn’t want him to embarrass her.

He described Kaylee and her best friend Madison Mogen as “beautiful souls.”

Goncalves also reflected on the special relationship between fathers and daughters.

“That’s the world as I see it now and I never want to see it any other way,” he said.

He talked about how close Maddie and Kaylee were from childhood and that they died together in the same bed.

“It comforts us to know, they were with their best friend in the whole world,” Goncalves said.

“You’re just going to have to love each other,” he told the crowd, in encouraging them to move forward. “The only thing that’s going to heal is love.”

“Madison, Maddie May, she was the first granddaughter, first grandkid of any of her grandparents,” he said, of his only child. “Everything she ever did was such a big deal. She was such a happy, great kid. Such a perfect little baby.”

Mogen talked with pride and through tears about how hard his daughter worked.

He also spoke of Jake, her only real boyfriend.

“I’m so glad she got to have at least a little taste of what it’s like to be in love with someone,” he said. “I was proud to call him my daughter’s boyfriend.”

Mogen thanked the investigators working on the case and for the love and support shown to his family through this difficult time.

Xana Kernodle’s family was not able to join the vigil, but the university said a service for her is planned for Friday.

President C. Scott Green encouraged those gathered to seek solace in each other. “The Vandal family across the world is shaken by the loss of our four students,” he said. “Tonight, we’re joined by people from across the state and the country for this vigil.”

He spoke of other gatherings being held at the same time across the state to honor the students.

“I want each of you to know you’re not alone,” Green said.

Green spoke of the legacy of the four students and encouraged people to remember the love and “boundless joy” that the victims brought to their lives.

“During their time at U of I, they fully embraced what it meant to be Vandals,” he said. “May we find peace as we honor their lives.”

The vigil ended with the crowd lighting electronic candles downloaded through an app.

As light flickered in the darkness, each victim’s name was read and a bell tolled before a moment of silence for each of them.