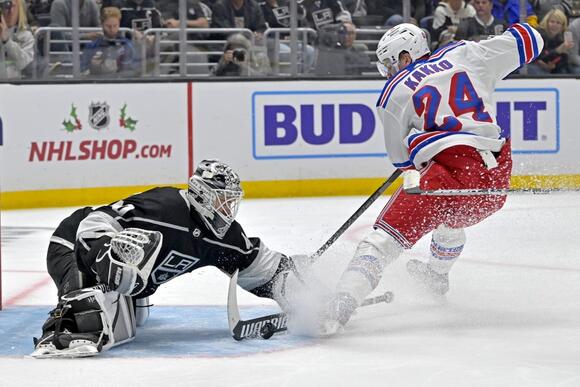 The Los Angeles Kings put goaltender Cal Petersen on waivers Wednesday, one day after the team’s 9-8 overtime loss to the visiting Seattle Kraken.

Petersen gave up four goals on 16 shots in relief of Jonathan Quick, who allowed five goals on 14 shots. Petersen allowed the decisive goal to Andre Burakovsky 2:08 into overtime.

Petersen is in the second season of a three-year, $15 million deal as the backup to Quick, the longtime Kings starting netminder.

William Carrier, Chandler Stephenson and Phil Kessel each had a goal and assist and the visiting Vegas Golden Knights held
NASHVILLE, TN・6 HOURS AGO
Sportsnaut

Pittsburgh Penguins forwards Kasperi Kapanen and Josh Archibald are available to return to the lineup for Tuesday’s game against the
PITTSBURGH, PA・15 HOURS AGO
Sportsnaut

Frank Vatrano scored 2:15 into overtime to lift the visiting Anaheim Ducks to a 3-2 win against the Chicago Blackhawks
ANAHEIM, CA・6 HOURS AGO
Sportsnaut

Timo Meier scored on a feed from Erik Karlsson in overtime as the San Jose Sharks rallied past Tampa Bay
TAMPA, FL・5 HOURS AGO
Sportsnaut

Phoenix Suns star guard and future Hall of Famer Chris Paul is the ultimate professional. He’s not one to create
PHOENIX, AZ・1 DAY AGO
Sportsnaut

The Sacramento Kings currently sit third in the Western Conference, ascending the NBA standings and in a position to end
SACRAMENTO, CA・2 DAYS AGO
Sportsnaut

Do the St. Louis Cardinals have an unwitting cure for some of the game’s worst ills? If so, the answer
SAINT LOUIS, MO・10 HOURS AGO
Sportsnaut

With their hold on a playoff spot rather tenuous, the Minnesota Wild know they wasted an opportunity in their first
DALLAS, TX・7 HOURS AGO
Sportsnaut

The Brooklyn Nets and Kings are finalizing a trade that will send second-year forward Kessler Edwards to Sacramento, The Athletic
BROOKLYN, NY・13 HOURS AGO
Sportsnaut

Kris Letang scored at 3:36 of overtime to give the Pittsburgh Penguins a 2-1 win over the visiting Colorado Avalanche
PITTSBURGH, PA・7 HOURS AGO
Sportsnaut

After a whirlwind few weeks that featured all kinds of rumors about Sean Payton, the head coach has landed with
DENVER, CO・9 HOURS AGO
Sportsnaut

Though the Utah Jazz have a losing record amid a roster overhaul, the team has been competitive in most games.
SALT LAKE CITY, UT・3 HOURS AGO
Sportsnaut

The Golden State Warriors hope to continue doing something they’ve done well this season — celebrate birthdays — when they
PORTLAND, OR・6 HOURS AGO