How will a TikTok ban impact SD agencies? 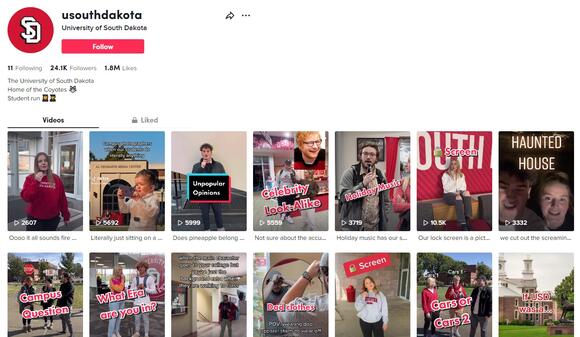 SIOUX FALLS, S.D. (KELO) — In its 2021 annual report, the South Dakota Department of Tourism highlighted the launch of a South Dakota TikTok channel.

The 2021 report says the department launched the TikTok channel to provide “another avenue for the team to reach its audiences with engaging and inspiring video content. Results in the channel’s first five months were impressive.”

On Tuesday, following Gov. Kristi Noem’s executive order banning use of the app for state government agencies, employees, and contractors on state devices, the Department of Tourism deleted its account which had more than 60,000 followers.

“We have removed our TikTok account pursuant to the Governor’s executive order and stopped all TikTok advertising. There was no additional impact,” Katyln Svendsen said in an emailed statement to KELOLAND News.

“We have an endless supply of other safe tools and productive resources to reach consumers to tell South Dakota’s story,” Svendsen said.

Noem’s executive order cites many government entities, including the U.S. Military and the Transportation Security Administration, that have banned TikTok on government-issued devices.

“The Chinese Communist Party uses information that it gathers on TikTok to manipulate the American people, and they gather data off the devices that access the platform,” Noem said in a statement announcing the ban.

“Smart and strong step by Governor @KristiNoem to protect the safety and private data of South Dakota citizens,” Carr tweeted .

How will South Dakota universities be impacted?

TikTok channels are popular on college campuses, including public universities under the South Dakota Board of Regents. Unlike the Department of Tourism, which has deleted its TikTok account, South Dakota university accounts remain.

Shuree Mortenson, the Director of Communications with the Board of Regents, told KELOLAND News the board is working through the implications for campuses from the executive order.

“Cybersecurity is of critical importance and requires continuous assessment and response to potential vulnerabilities, such as TikTok,” Mortenson said in an emailed statement. “The Board is scheduled to convene next week for their December meeting and will undoubtedly address this topic at that time.”

The South Dakota State Fair is also on TikTok. That account has 2,000 followers.

Republican Julie Frye-Mueller is once again representing the southwestern-most district in the South Dakota Senate. A Senate Committee on Discipline and Expulsion chaired by David Wheeler had recommended her censure and reinstatement.
SOUTH DAKOTA STATE・7 HOURS AGO
KCAU 9 News

Two bills dealing with education were recently introduced into the South Dakota Legislature. One seeks to expand virtual schooling, and the other to provide taxpayer funding for private school tuition.
SOUTH DAKOTA STATE・6 HOURS AGO
KCAU 9 News

South Dakota lawmakers in the House Health and Services Committee today advanced a bill along party lines that would ban certain health care for transgender kids in the state.
ALABAMA STATE・1 DAY AGO
KCAU 9 News

The South Dakota Senate has censured one of its own.
SOUTH DAKOTA STATE・20 HOURS AGO
KCAU 9 News

The governor says the point-five percent tax cut will save $18 million for businesses. The bill also changes when a surcharge is imposed on the Unemployment Insurance Trust Fund.
SOUTH DAKOTA STATE・5 HOURS AGO
KCAU 9 News

A bill allowing hair stylists and cosmetologists to practice outside their brick-and-mortar spaces is moving forward in the Iowa Senate.
IOWA STATE・2 HOURS AGO
KCAU 9 News

The GFP's proposed budget for $119.7 million for fiscal year 2024 and about $6.7 million of that would come from the state's general fund, according to the FY2024 budget. Federal money accounts for $31.6 million while other funds account for $81.3 million.
SOUTH DAKOTA STATE・2 HOURS AGO
KCAU 9 News

The Nebraska Legislature’s Health and Human Services Committee took nearly eight hours of testimony Wednesday before adjourning without a vote on whether to advance a bill that would outlaw abortion at a point before many women know they’re pregnant.
NEBRASKA STATE・3 HOURS AGO
KCAU 9 News

The Foodbank of Siouxland is coming out against two bills being considered in by Iowa lawmakers during the legislative session, saying it would make it more difficult for Iowans to access SNAP benefits.
IOWA STATE・7 HOURS AGO
KCAU 9 News

Wednesday afternoon, Republicans on the senate education committee amended the original bill and approved a 3% funding increase, matching the proposed increase in the house.
IOWA STATE・5 HOURS AGO
KCAU 9 News

Iowans line up to speak against new anti-LGBTQ education measures

Republican majorities in the Iowa House and Senate on Tuesday advanced two bills out of committee that would place new restrictions on LGBTQ youth in schools and on diversity topics in curriculum.
IOWA STATE・1 DAY AGO
KCAU 9 News

Cow Cam brings thousands of viewers inside the barn

This year, the cow cam is at a new farm, but still bringing viewers great live coverage of what calving season looks like for South Dakota farmers and ranchers.
SOUTH DAKOTA STATE・1 DAY AGO
KCAU 9 News

It might surprise you to find out that there are more than a hundred people reported missing in South Dakota right now.
SOUTH DAKOTA STATE・1 DAY AGO
KCAU 9 News

Iowa's Attorney General, Brenna Bird is looking at stiffer sentencing guidelines for the dealers, aiming for accountability and to fill the gap in the sentencing measures.
IOWA STATE・1 DAY AGO
KCAU 9 News

During a budget hearing before the South Dakota Legislature's Joint Committee on Appropriations Monday, the Department of Health (DOH) presented info on the state's medical cannabis program.
1 DAY AGO
KCAU 9 News

More than 2.5 million pounds of canned meat is being recalled due to a packaging malfunction, the U.S. Department of Agriculture's Food Safety and Inspection Safety said.
IOWA STATE・8 HOURS AGO
KCAU 9 News

The College Board on Wednesday released a revised version of an Advanced Placement African American studies course following criticism from Florida Gov. Ron DeSantis (R), who refused to allow the program to run in the state’s schools.  In a new framework for the course reviewed by The Hill, Black writers and scholars associated with critical race […]
FLORIDA STATE・1 DAY AGO
KCAU 9 News

GOP-led states call on court to shut down DACA

A coalition of nine Republican-led states on Tuesday asked a federal court in Texas to end the Deferred Action for Childhood Arrivals (DACA) program, which shields “Dreamers” from deportation. The DACA program was implemented under the Obama administration in 2012 as a way to protect undocumented immigrants who were brought into the U.S. as children. […]
TEXAS STATE・1 DAY AGO