Items Unused In Wake Of Canton Apt. Fire Up For Auction 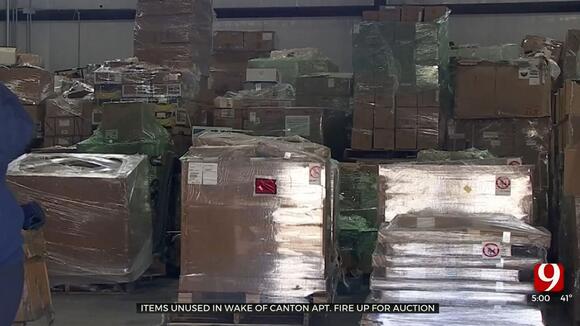 A multi-million-dollar apartment complex goes up in flames. Now months later, the wreckage is cleared, and developers are looking toward the future.

A tragic loss for developers, but Louis Dakil sees a bright side despite the dark cloud.

The Canton at Classen Curve building couldn't be saved, but there are hundreds of items that were.

“We had the investment group give them a call of liquidating the inventory, the equipment and furnishing that was going to be put into the apartment complexes,” Dakil said.

Dakil said there's five storage locations of items that never made it inside the apartment complex.

“The situation was you had washers and dryers and sinks and anything you would find in an apartment complex also elevators anything you can imagine there's carpet. It's really the magnitude is incredible,” Dakil said.

“There's over one million dollars I believe at dealer’s cost. We've been getting calls from all parts of the United States,” Dakil said.

The Canton Apartment developers said the statement they sent News 9 in the summer still stands.

“Humphreys Capital and our trusted development partners are beginning the complex process of evaluating our options for this prime location.”

“The fire department said the fire was ruled an accident and the official cause is listed as an “unintended electrical pathway.” Dakil said.

If you can’t make it to the auction, bid live online by clicking here .

A man awaiting transfer to the Garfield County jail died last Friday from apparent suicide while in custody at the Oklahoma County Detention Center. Oklahoma City police arrested Isiah Mitchell, 26, on a bicycle violation and a nearly seven year-old warrant out of Garfield County. Police released the officer’s body camera footage on Friday, along with the dash camera video.
GARFIELD COUNTY, OK・1 DAY AGO