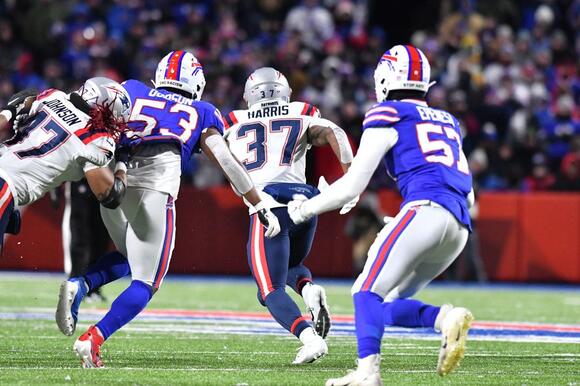 The Patriots will be without a key component of their running game for their Week 13 matchup with the Buffalo Bills at Gillette Stadium.

FOXBORO — The New England Patriots and Buffalo Bills have released their final injury and practice participation reports ahead of their pivotal Week 13 matchup .

The Pats and the Bills are set to square off on Thursday night , Dec. 1. at 8:15 p.m. ET at Gillette Stadium

While the status of six Patriots remains in question, two key pieces of their offense will not suit up against Buffalo.

Here is Wednesday afternoon’s full report, along with its potential implications for Thursday night.

DNP - Did Not Participate

What it means for the Patriots:

The Pats will clearly miss Harris’ versatile running style, which blends both finesse and power. As expected, running back Rhamondre Stevenson will be forced into an extensive workload in his absence. Buffalo ranks seventh in the league, allowing 105.6 yards per game on the ground and ninth at 4.24 yards per carry. As such, the task of moving the ball on the ground will not be easy.

New England only has rookie running backs Pierre Strong, Jr. and Kevin Harris on their active roster, in addition to Stevenson. Veteran J.J. Taylor, who was released and re-signed to New England’s practice squad last week, could be an option as a game day elevation.

Despite a strong showing against the Minnesota Vikings on Thanksgiving night, the Patriots offensive line may once again be makeshift as they head into Thursday night’s matchup. Starting tackle Isaiah Wynn is out with a foot injury, while center David Andrews (thigh) and swing tackle Yodny Cajuste (calf) are listed as questionable. questionable. The Bills boast a deep front that uses a lot of bodies including Ed Oliver, DaQuan Jones and Jordan Phillips inside. Linebackers Matt Milano, Terrel Bernard and Tremaine Edmunds are fast to the ball as well. In short, the Pats will have difficulty keeping Mac Jones protected if either Andrews or Cajuste (or both) join Wynn on the sidelines.

The Bills conducted a walk-through practice on Wednesday.

What it means for the Bills:

Despite being reported throughout the week, the Bills officially confirmed Miller’s absence for Thursday’s game. The 33-year-old has a team-leading eight sacks, 12 quarterback hits, 10 tackles for loss and one forced fumble in his first season in Buffalo. His absence will be a relief for a Patriots offensive line that has been inconsistent at best this season. Look for defensive tackle Ed Oliver and defensive end Greg Rousseau to take on the lead duties in Buffalo’s pass rush in his absence.

Dawkins will miss only his second game since being drafted by Buffalo in the second round of the 2017 NFL draft. Therefore, swing tackle David Quessenberry should get the starting nod in his stead. The Patriots had difficulty in exploiting the absence of Minnesota Vikings left tackle Christian Darrisaw last week, logging only one sack on quarterback Kirk Cousins just once. With Josh Allen being more elusive , the Bills may get some assistance in helping to keep New England’s pass rush at bay in Week 13.

Patrick Mahomes might need to ask for a little forgiveness from his wife. Mahomes spoke with the media on Monday during Super Bowl Opening Night ahead of Sunday’s big game between his Kansas City Chiefs and the Philadelphia Eagles. The Chiefs quarterback was asked about his Valentine’s Day plans considering the holiday is on February... The post Patrick Mahomes might be in trouble with his wife over 1 comment appeared first on Larry Brown Sports.
KANSAS CITY, MO・4 HOURS AGO
prosportsextra.com

I’ll never enjoy covering these stories but whenever someone sadly passes away we need to make sure it’s covered. If you’re a fan of USC or the Los Angeles Rams this persons death might hurt you more than on average. Former Cleveland Browns first round pick, Charles,...
LOS ANGELES, CA・1 DAY AGO
Patriot Country

A former Houston Texans position coach has said that he believes that DeAndre Hopkins and Bill O'Brien could work together in a reunion.
HOUSTON, TX・1 HOUR AGO
Patriot Country

“I think it’s such a stupid conversation to say ‘Brady vs. Belichick’ because in my mind that’s not what partnerships are about,” the retired Patriots legend says.
4 HOURS AGO
Patriot Country

The New England Patriots have multiple needs this offseason including wide receiver. Could they look to upgrade the position in the draft?
6 HOURS AGO
Patriot Country

What does Patriots QB Mac Jones mean by referring to the famous Rudyard Kipling poem?
ALABAMA STATE・8 HOURS AGO