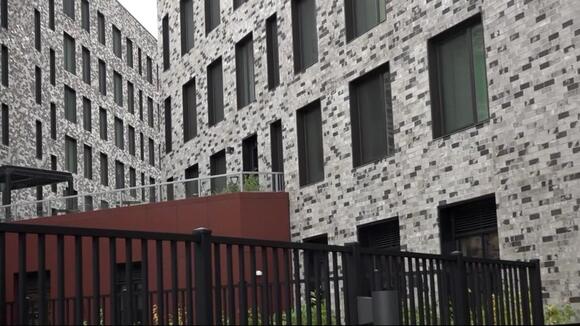 A newly unveiled housing complex in Brownsville is touting itself as a direct response to the affordable housing crisis while focusing on energy efficiency.

Vital Brookdale is now open to accept new residents, though many of those residents have already moved in to the seven-floor apartment building.

Anthony McQueen moved in about three months ago after spending years in a group home. He couldn’t contain his excitement.

McQueen’s new home is one of 160 apartments in the building, 100 of which are already occupied. Vital Brookdale’s apartments are mostly affordable housing units where a tenant or family can get an apartment based on their income in contrast to the area’s median income.

Thirty-six units are reserved specifically for those who have aged out of the foster care system or have developmental disabilities.

Nikeya Burnett says her studio is a one stop shop and she deals with insurance companies and finds her customers local financial resources.
ISLIP, NY・2 HOURS AGO
News 12

Women in NABW rise in ranks of leadership within Brooklyn chapter

There's a changing of the guard for the National Association of Black Military Women in Brooklyn and across the nation.
BROOKLYN, NY・7 HOURS AGO
News 12

Mayor Eric Adams slept in the Brooklyn Cruise Terminal migrant housing complex on Friday, but elected officials and migrants are demanding that conditions be improved in the facility.
BROOKLYN, NY・1 HOUR AGO
News 12

While mortgage rates have come down from their recent high of over 7 percent, they remain nearly double their 2021 lows, making home buying a struggle for many.
WESTCHESTER COUNTY, NY・3 HOURS AGO
News 12

Cookies and community: Why it’s important to support Girl Scouts

Girl Scouts from North Jersey discuss how they sell cookies and why it’s important for people to support and buy them.
KINNELON, NJ・12 HOURS AGO
News 12

The artwork is on display on the third floor at the Arsenal in Central Park.
NEW YORK CITY, NY・10 HOURS AGO
News 12

JFK Boulevard in Jersey City will be closed between St. Paul’s Avenue and Nardone Place due to a partial wall collapse.
JERSEY CITY, NJ・4 HOURS AGO
News 12

Fast-food restaurant Chick-fil-A is coming to Yonkers - but not everyone is happy about it, and one group protested about it today.
YONKERS, NY・14 HOURS AGO
News 12

The Manor in West Orange is closing, leaving vendors and couples in limbo

News 12’s Ali Reid spoke with Jessica Piegaro, the chief operating officer of Brian Delia Photography, about the closing and what couples can do if they need a new venue.
WEST ORANGE, NJ・1 DAY AGO
News 12

The Stamford Board of Representatives is expected to take up the matter at a meeting Monday night.
STAMFORD, CT・8 HOURS AGO
News 12

Police say both victims, a 19-year-old male and a 17-year-old girl, are in stable condition.
BROOKLYN, NY・3 HOURS AGO
News 12

A Bronx educator is helping students reach their potential through the lessons he has learned in life.
BRONX, NY・13 HOURS AGO
News 12

A partial wall collapse along John F. Kennedy Boulevard in Jersey City is expected to impact the evening commute with delays between St. Paul’s Avenue and Nardone Place. The wall gave away in an abandoned lot, so no one was hurt. It was at the site of what was once an AC Chevrolet dealership. The wall was part of a cement wall leading up to JFK Boulevard that was held in place with supports. The roadway is now shut down in the area.
JERSEY CITY, NJ・4 HOURS AGO
News 12

Once the dogs are cleaned up and healthy, they will be ready to move into their forever homes.
WESTBURY, NY・2 HOURS AGO
News 12

Police said the crash happened just before 8:30 a.m. while the car was traveling south on West Avenue and veered off course.
BRIDGEPORT, CT・1 DAY AGO
News 12

Elmsford woman turns 100, has day named in her honor

PSEG: Power restored after outage in Passaic that affected 1,800

The electricity was restored in the city of Passaic following a power outage Monday morning. The outage impacted about 1,800 customers. The radio systems of police and fire departments in the area were also impacted. These services were restored just before 9 a.m. The power was fully restored by the...
PASSAIC, NJ・11 HOURS AGO