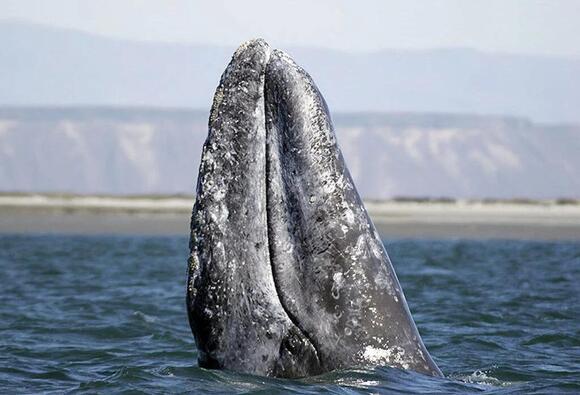 Scientists are investigating the causes of a nearly 40 percent decline in the Pacific gray whales that pass along the Oregon Coast each winter and spring on their way from Baja, Mexico, to the Arctic. One primary suspect is food scarcity with Arctic feeding grounds impacted by warming temperatures and the loss of sea ice from human-caused climate change.

The whales reached a population high of about 27,000 in 2016, but have since dropped to 16,650, according to new data from the National Oceanic and Atmospheric Administration, or NOAA.

Birth rates are down by 40 percent in just the last year, dropping to the lowest level since recording began in 1994.

NOAA declared an “unusual mortality event” in 2019 after 120 dead gray whales washed up on beaches from California to Alaska. Since then, about 600 dead gray whales have washed ashore. Many appeared to be malnourished, according to NOAA.

Large fluctuations in birth rates and unusual mortality events are not uncommon among the eastern North Pacific gray whale, but the current trend is lasting longer than others, and some scientists fear populations might not rebound to levels seen in the past.

One population of whales studied by Oregon State University scientists no longer goes to the Arctic to feed, instead staying along the coasts of Oregon, Washington and British Columbia.

Experts say there isn’t a single reason that explains the increase in deaths and decrease in births, but they say the evidence suggests scarce food is affecting their health. Calf birth rates typically decline when there is an unusual mortality event because adult whale survival and reproduction are closely linked. Poorer health conditions can lead whales to delay reproduction and result in fewer births.

The last time the eastern North Pacific gray whale population declined as significantly as it has today was in the late 1980s, according to NOAA data. It rebounded and reached new highs in the years after, and in 1994, Pacific gray whales were removed from the Endangered Species List. In 1999 and 2000, the population declined again by 25 percent but rebounded to the 2016 high.

He said there seems to be a drop every 10 or 20 years, and that historically, the population seems to recover pretty quickly.

“What we’re worried about now is if they’re still going to be able to do that, to recover, given the really major changes that are happening to their main feeding grounds up in the Arctic,” he said.

Stewart said they’ve studied other potential causes for the losses, such as whales being struck by boats or tangled in fishing gear.

“It seems like these big die-offs are driven more by conditions in the Arctic, which these days is probably a result of climate change,” Stewart said.

On their 10,000 mile journey from Mexico to Alaska, gray whales eat all kinds of food, but the bulk of their feeding happens in the Arctic during the summer.

There, the Pacific gray whales feed on amphipods, a class of small, spineless crustaceans that look similar to shrimp and live near the sea floor.

“Much of the food chain up there is tied to the ice,” Stewart said. “There’s algae that lives on the ice, which then dies, sinks down to the bottom and kind of links all of that productivity down to the sea floor, which is then what the whales are feeding on. So when that’s disrupted it affects their food supply.”

Because of extreme changes to sea ice cover, the unusual mortality events could become more frequent, and could last longer.

“This one seems to be lasting, possibly longer than the previous ones. It’s definitely gone on a little bit longer than the most recent one in 2000, and they might struggle more to recover from them if there’s not enough capacity in the Arctic to support this many whales,” he said.

One group of about 200 Pacific gray whales called the Pacific Coast Feeding Group, or the summer residents, no longer travels to the Arctic. Instead, they cut that migration short, and forage in a range between northern California to British Columbia. Scientists don’t know if these whales, which have been mostly tracked over just the last decade, are doing this for the first time, or whether it’s something they previously did before commercial whaling almost wiped gray whales out entirely.

Scientists at Oregon State University have been tracking them since about 2009. Since 2016, they have taken aerial photos to assess their body conditions and collected fecal samples to measure levels of four hormones that affect the whales’ reproductive health, the balance of their diet and whether they are overly stressed.

“It’s a gold mine of data,” said Lisa Hildebrand, an OSU doctoral student who’s researching the group with Marine Mammal Institute scientists. Their numbers have fluctuated, but not as drastically as whales that traditionally have traveled to the Arctic. In the past, the latter tended to have more robust bodies than those that stick around the Northwest, but that’s changing: The Pacific Coast Feeding Group’s body conditions have been improving over the years, getting bigger and rounder, while the body conditions of whales going all the way to the Arctic have been getting worse.

Hildebrand said scientists have learned that the whales that stick around the Pacific Coast are “flex-feeders” adapting to more food sources than in the past. The researchers found that the different species the whales eat off the Oregon coast were more nutrient and energy-rich than those in the Arctic, but they’re only available for a few weeks in the summer as opposed to the longer availability in the Arctic summer from May through September.

Hildebrand said scientists are learning that whales might be weighing the trade-offs of going all the way to the Arctic.

US may lift protections for Yellowstone, Glacier grizzlies

BILLINGS, Mont. (AP) — The Biden administration took a first step Friday toward ending federal protections for grizzly bears in the northern Rocky Mountains, which would open the door to future hunting in Montana, Wyoming and Idaho. The U.S. Fish and Wildlife Service said state officials provided “substantial” information that grizzlies have recovered from the threat of extinction in the regions surrounding Yellowstone and Glacier national parks. But federal officials...
IDAHO STATE・1 DAY AGO
Idaho State Journal

Federal officials signaled Friday that they have rejected Idaho’s petition to strip Endangered Species Act protections from grizzly bears in the Lower 48 states. At the same time, the U.S. Fish and Wildlife Service indicated more modest proposals submitted by Wyoming and Montana merited closer examination. Officials from the agency will spend the next year further studying petitions from Idaho’s neighbors. Montana asked the federal government that grizzlies in the...
IDAHO STATE・1 DAY AGO