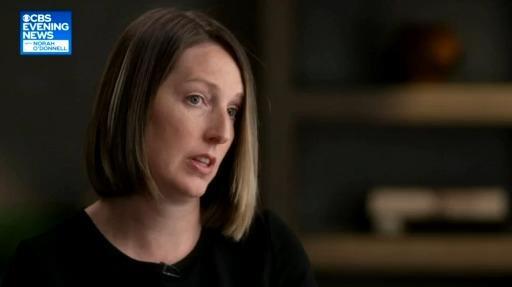 CHICAGO (CBS) -- An Indiana doctor who spoke out about restrictive abortion laws could be facing legal trouble.

Doctor Caitlin Bernard spoke with Norah O'Donnell of CBS News in July shortly after providing an abortion to a young rape victim who couldn't get the procedure in Ohio because of the state's abortion law.

Indiana's Attorney General is now asking the state medical board to discipline Bernard for not reporting the girl's child abuse and violating patient privacy laws.

This doctor is a hero and she did report and file all the right documents in a timely manner. This is nothing more than a bunch of Christian-taliban MAGA nuts trying to scare all doctors. It won’t work.

Sick of the Indiana republican leaders trying to run our lives. People of Indiana need to wake up and vote for their own interest not just for party. Republicans are nothing more than wannabe facists.

ST. JOHN, Indiana (CBS) – The St. John, Indiana police chief announced one of his officers is being criminally charged for shooting at another officer from a different town.CBS 2's Noel Brennan was in St. John to break down the story.Two months ago, we heard different versions of the same story from two different police departments in Northwest Indiana.On Wednesday, we learned the St. John Police Department has an officer facing felony charges. The mayor of nearby Hammond was glad to see it.The chief of the St. John Police Department read a statement but didn't take questions about the new...
HAMMOND, IN・2 DAYS AGO
CBS Chicago

CHICAGO (CBS) -- California attorney Thomas Girardi and two colleagues from his law firm are facing federal charges accusing them of stealing more than $3 million in settlement money from the families of victims of the 2018 crash of Lion Air Flight 610 in Indonesia.Girardi, the estranged husband of "Real Housewives of Beverly Hills" star Erika Jayne, has been indicted on eight counts of wire fraud and four counts of criminal contempt of court. David Lira, an attorney at Girardi's law firm, Girardi Keese; and Christopher Kamon, the former head of accounting at Girardi Keese, both also are charged with...
CALIFORNIA STATE・2 DAYS AGO
CBS Chicago

CHICAGO (CBS) -- Dramatic video shows the moment an Illinois state trooper was thrown from the top of a stolen car near the Dan Ryan Expressway late on Tuesday afternoon.At least one of the thieves was still on the run a day later.CBS 2's Sabrina Franza spoke Wednesday with the owner of the stolen car - a rideshare driver who was carjacked at gunpoint by their own passengers.Again, at least one of those passengers is still out there, and thus, the driver did not want to speak with us on camera.The shocking video was taken right off the Dan Ryan,...
CHICAGO, IL・2 DAYS AGO
CBS Chicago

CHICAGO (CBS) – Romance is in the air this season, for coyotes.It's mating season for the animals, and the Forest Preserve of DuPage County is warning people to watch out for them wandering around homes.Make sure to keep dogs on a leash, and cats indoors.If you do encounter a coyote, don't run. Try to appear large to scare them.CBS 2 spoke with an ecologist back in October about being careful with coyotes in our area."What you have are juvenile coyotes and essentially they are leaving mom and dad's territory, and they're striking out on their own trying to find their town territory," said Dan Thompson. "But if you can imagine the Chicago region, it's pretty well established with coyote pairs. So these guys are really nomadic right now."The coyote mating season typically runs through May.
CHICAGO, IL・1 DAY AGO