Jeff Saturday to Colts: Remainder of season ‘defining moment in your life’ 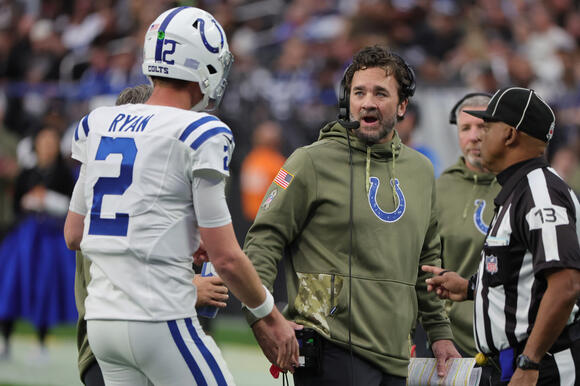 INDIANAPOLIS – A season that began with so much promise is unraveling one week at a time.

The slight favorite to win the AFC South in August heads into December with five losses in its last six games.

The Indianapolis Colts’ 4-7-1 record has the fan base transferring its glance from a disappearing playoff spot to upward mobility in the April draft.

Colts’ Jeff Saturday: ‘Wish I had that third down back’

Yet five games remain and the challenge for the players and coaches in the Indiana Farm Bureau Football Center is undeniable: regroup and find a way to get back on track, even if only for Sunday night against the Dallas Cowboys.

The postseason no longer is a realistic goal. But over the final six weeks, no one should be peeking at the looming offseason.

This is not uncharted territory for two of the team’s leaders. Interim head coach Jeff Saturday and quarterback Matt Ryan have dealt with Decembers that have tested the mettle of everyone in an organization and stirred the fan base.

But then came 2011. Peyton Manning missed the entire season with his neck issues. The Colts opened the season with 13 losses en route to a 2-14 record and the fan base began its “Suck for Luck’’ chants.

Saturday has shared memories of that “miserable experience’’ with his roster.

“I told them I learned so much about myself as a football player, as a man, as a leader in those kind of darkest days,’’ he said Wednesday. “I watched (coach Jim) Caldwell go through it and as an organization what that felt like.

“It’s not only for the Colts now, but the audition for 31 other teams is a very real thing in the NFL,’’ Saturday said. “And what you put on tape is what people believe about you.’’

He laughed at the memory of the “Suck for Luck’’ refrain that resonated across the city. Every player in the locker room was driven not to join the 2008 Detroit Lions in NFL infamy at 0-16. The ’11 Colts cared not one bit about the ’12 NFL Draft.

It’s the same mindset in the ’22 locker room.

“From the guys in this room and myself included, I know my name’s getting attached to the wins and losses,’’ Saturday said. “Whatever happens (in the draft), that ain’t none of my business, right? I’ll go by Ws and Ls and I want to be the best head coach I can be.’’

Heading into their week 13 road date with the Cowboys, the Colts are the No. 10 seed in the seven-team playoff field. Their chance at leapfrogging either No. 6 seed Cincinnati (7-4) or the No. 7 New York Jets (7-4) is extremely remote.

But they’re 14 th in the pecking order for the April draft, and each loss potentially is advantageous for the long-range picture.

“We haven’t even addressed it,’’ Saturday said. “My train of thought . . . has never been about what it looks like – whether as a player or a coach – next year. It’s about now. We’ve got plenty ahead to take care of.’’

Ryan is in lockstep with his coach. From 2008-17, he was part of a Falcons franchise that reached the playoffs six times and advanced to the Super Bowl after the 2016 season.

“It’s never fun,’’ Ryan said. “You obviously want to be driving the ship. You want to be the one where the division is running through it, you’re playing for position and homefield advantage.

“But I also told the guys, in these kinds of situations, I’ve learned more about players that I’ve played with than in really any other situations. I’ve gained respect and lost respect for certain guys as you’re going through these things.’’

It’s all about how everyone responds when a season disintegrates and losses pile up.

“One hundred percent,’’ Ryan said. “It still matters. Every time we step on the field, it matters. We’ve got a young team. We’ve got a lot of guys who this might be their first time kind of going through that experience.

From a player’s perspective, that doesn’t include favorably impacting next April’s draft status.

He recalled 2019 in Atlanta. The team took itself out of playoff consideration by starting 3-9, but then it got its act together and finished with a four-game winning streak. The Falcons capped their unsatisfactory season with a 28-22 overtime win at Tampa Bay.

Ryan and the players were ecstatic. The fans? Not so much.

“It screwed us on like eight draft positions or something like that and they were all pissed off about that afterwards,’’ he said. “As a player, you’re like, ‘Well, what are we supposed to do?’ We’re out there, we’re playing this game, you’re going to win.

“It’s wild, the fan perspective. And I get it. I understand where they’re at. I think as players, you’re not wired that way. It’s here and now. It’s about the guys in this locker room that you’re playing with all the time.

“There’s a lot of professional and personal pride that goes into it. You want to perform at your best every time you step out there.’’

Listen to the Colts Blue Zone Podcast for coverage and analysis of the Indianapolis Colts.

Report: Colts taking aim at second round of interviews in head coaching search

INDIANAPOLIS – The Indianapolis Colts’ search for a new head coach apparently is entering Phase 2. According to NFL Network, the team is bringing in Denver defensive coordinator Ejiro Evero for a second interview and is interested in a follow-up with Dallas defensive coordinator Dan Quinn. Jeff Saturday, who served as interim head coach after […]
INDIANAPOLIS, IN・3 DAYS AGO
FOX59

INDIANAPOLIS – Crispus Attucks and Ben Davis look to keep winning on the boys’ side, while the girls have one final tune-up before sectionals begin this week. Dave Griffiths has high school basketball scores and highlights from across the state on the “Friday Night Fast Break” on FOX59.
INDIANAPOLIS, IN・11 HOURS AGO
FOX59

On the Colts Blue Zone Podcast, Mike Chappell and company discuss the Colts' 2023 impending free agents and provide an update on the coaching search.
INDIANAPOLIS, IN・2 DAYS AGO
OnlyHomers

The Buffalo Bills are coming off a disappointing end to their season, losing 27-10 at home against the Cincinnati Bengals in the AFC Divisional round in the playoffs. Entering the offseason, the Buffalo Bills have started looking toward the future and made the tough decision to fire one of their long-tenured coaches.
2 DAYS AGO
FOX59

Tragic news has struck the world of professional wrestling with the word that one of wrestling's biggest stars has lost his life at the age of 38. Celebrity entertainment outlet TMZ, which is known for breaking the news of many deaths of famous people around the world, broke the news of the death of legendary wrestler Jay Briscoe, who has tragically died in a car crash at the age of 38.
20 HOURS AGO
FOX59

Court docs: Suspect in deadly stabbing smoked ‘the rest of his meth’ before police arrested him

INDIANAPOLIS – The suspect in a deadly Indianapolis stabbing told investigators he smoked “the rest of his meth” before police could lock him up. Indianapolis Metropolitan police arrested 30-year-old Nicholas Radford in connection with the Jan. 24 death of 50-year-old Cornelius DeWayne Coleman, who was found fatally stabbed in the 200 block of South Illinois […]
INDIANAPOLIS, IN・1 DAY AGO
FOX59

MUNCIE, Ind. — Parents of a 5-month-old girl were arrested on Thursday after doctors discovered the baby was suffering from two broken legs, a broken arm, 15 fractured ribs and two skull fractures that caused a brain bleed. The Muncie Police Department arrested Austin Lee Choate, 24, and Montana Alexis Davis, 23, on Thursday evening […]
MUNCIE, IN・20 HOURS AGO
FOX59

INDIANAPOLIS — An accused drug dealer on GPS monitoring is arrested this week following a police raid on Indy’s near east side. Indianapolis Metropolitan Police Department arrested two men on drug charges after cocaine and methamphetamine were found during a search at a near east side home. The drugs were found during an investigation at […]
INDIANAPOLIS, IN・1 DAY AGO
FOX59

Dewayne Edward Patterson, age 64, was convicted in the 2020 murder of John Patton.
INDIANAPOLIS, IN・1 DAY AGO
FOX59

INDIANAPOLIS — An Indianapolis man has been found guilty of stabbing an ex-girlfriend and her 3-year-old daughter multiple times in the head with a steak knife before stealing her car and driving away with the child and her grandfather still inside. On Tuesday, a jury found Richard Rybolt guilty of two counts of attempted murder, […]
INDIANAPOLIS, IN・1 DAY AGO
FOX59

MUNCIE, Ind. — A Muncie man faces charges after police say he repeatedly hit and yelled at a young child and told a woman that he would kill her. In the probable cause affidavit filed in the case against Cory Seats, an officer with the Muncie Police Department wrote that they first learned about the […]
MUNCIE, IN・1 DAY AGO
FOX59

IMPD: Baby from abduction is safe, non-custodial parent in custody

UPDATE (1/25/2023): IMPD confirms the 3-month-old child has been located and is safe. Lawrence Whitsitt is in police custody. Police thanked the public for their assistance in this case. ———————————– INDIANAPOLIS — Indianapolis Metro police are asking for the public’s help in finding a father who has abducted a 3-month-old child he does not have […]
INDIANAPOLIS, IN・3 DAYS AGO
FOX59

INDIANAPOLIS – Heavy snow is expected to begin early Wednesday morning and will accumulate in excess of 6″ across much of Central Indiana. Storm timing & impacts TUESDAY EVENING: Temperatures begin to drop back into the 30s as our sky becomes overcast. Conditions remain quiet & calm otherwise. This is your last chance to make […]
INDIANA STATE・3 DAYS AGO
FOX59

Videos showing the violent arrest of 29-year-old Tyre Nichols, a Memphis man who died 3 days after he was beaten by police in a traffic stop Jan. 7, has been released by Memphis officials.
MEMPHIS, TN・16 HOURS AGO
FOX59

1 dead in small plane crash on Indy’s south side

INDIANAPOLIS — One person is dead after a small plane crash in a residential area on the south side of Indianapolis. Indianapolis Metro police were called around 3:45 p.m. Tuesday to the 4100 block of Weaver Avenue for a small aircraft crash on the railroad tracks. Around 4:45 p.m., IMPD crews on scene confirmed the […]
INDIANAPOLIS, IN・3 DAYS AGO
FOX59

UPDATE: Miranda Huckeby shared on social media that Sky secured a ride from New Mexico. If all goes as planned, Sky and Merrick should be reunited by Friday. Original story: ANDERSON, Ind.- An 8-year-old boy is without his companion dog. The Huckeby family was driving cross-country in the process of moving to central Indiana from […]
INDIANA STATE・2 DAYS AGO
FOX59

Woman found dead inside car on Indy’s northeast side

INDIANAPOLIS — Police are investigating after a woman was found dead with a gunshot wound on the city’s northeast side on Wednesday evening. According to the Indianapolis Metropolitan Police Department, officers were dispatched to Villages at the Mill Crossing in the 3800 block of Mill Crossing Drive, not far from Sherman Drive and 38th Street. […]
INDIANAPOLIS, IN・2 DAYS AGO
FOX59

Deep dish, thin crust, fire grilled — there’s no shortage of ways to make a pizza. Yelp is praising the wonder that is pizza in 100 different ways with its 2023 list of the top places for pizza in the United States and Canada. A trio of Indiana pizza spots made the cut, including two […]
INDIANAPOLIS, IN・2 DAYS AGO
FOX59

The Colts have had trouble finding a legitimate edge pass rusher, so Yannick Ngakoue might be viewed as one of their top off-season priorities.
INDIANAPOLIS, IN・18 HOURS AGO