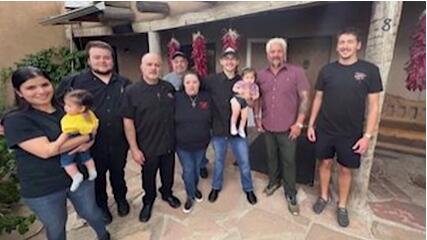 TAOS, N.M. (KRQE) – A family-owned restaurant in Taos was recently featured in the Food Network show Diners, Drive-Ins, and Dives. The owner of Ranchos Plaza Grill learned in late September the restaurant would be the first Taos restaurant ever featured on the show.

Filming took three days and the owner was able to showcase two of his popular dishes, the carne adovada and stuffed sopaipilla. “It’s kind of exciting because we’re the first restaurant in Taos to be featured,” says owner Adam Medina. “I know he’s been in Albuquerque and Santa Fe before but the producer said he’s never been in Taos.”

Ranchos Plaza Grill has been in Taos for 23 years.

Bravo!! I'm SO happy for this hard working & talented family. Their food is beyond great and the service is impeccable! 🥰🥰🥰🥰

"The core value of our profession is to protect and preserve life."
SANTA FE, NM・12 HOURS AGO
KRQE News 13

One police officer involved was fired, but the other one kept his job.
ALBUQUERQUE, NM・2 DAYS AGO