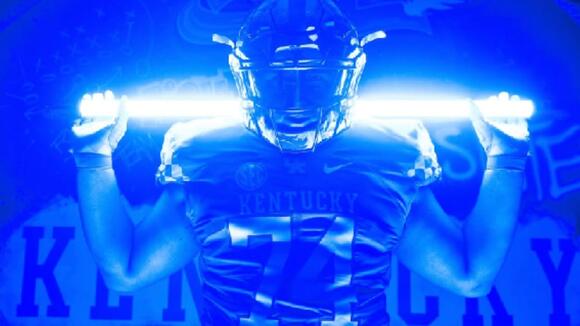 Mars Hill Bible School (Ala.) offensive lineman Koby Keenum has been committed to Kentucky since July 9th, but one SEC school is not giving up hopes on flipping the commitment.

Keenum was recently on campus in Lexington for Kentucky's win over Louisville, and he has remained firm in his commitment to Cats since July, when he chose them over Louisville, North Carolina and others.

The 6'4", 300lb lineman could have arranged this visit in response to Kentucky parting ways with offensive coordinator Rich Scangarello, or he could just be doing his due diligence.

The early signing period is later than normal this year, starting on December 21st and running through the 23rd, allowing recruits to use the month of December to take plenty of visits.

Keenum reports over 50 Division 1 offers, and he is expected to be a key part of Kentucky's class.

Kentucky basketball's 2022-23 season is one that's been filled with turmoil.  Coach John Calipari's teams haven't always been known for smooth sailing from November to March, but this year's team has whooshed around the rockiest of seas, only comparable to something out of a "Pirates of the ...
LEXINGTON, KY・2 HOURS AGO
Wildcats Today

Both Kentucky and Florida will enter Rupp Arena on Saturday playing solid basketball.  The Wildcats have won five SEC games in a row, while the Gators have won six of seven in conference play, including a monumental win over No. 2 Tennessee in Gainesville on Wednesday night.  Betting ...
GAINESVILLE, FL・1 HOUR AGO
Wildcats Today

How to Watch, Listen: Kentucky-Florida

Kentucky basketball is back in the saddle after picking up an important road win in Oxford against Ole Miss on Tuesday night.  The Wildcats have returned to Lexington for the first of two games against the Florida Gators, with round one going down inside Rupp Arena on Saturday night. The ...
LEXINGTON, KY・6 HOURS AGO
Wildcats Today

Florida Defeats No. 2 Tennessee, Setting Stage for Important Bubble Matchup Between Wildcats and Gators in Lexington

On Wednesday night in Gainesville, the Florida Gators became just the second team in the SEC this season to hand a loss to Tennessee, defeating the No. 2 Volunteers in the O'Connell Center, 67-54.  The win is the second against a ranked opponent this season for first-year UF head coach Todd ...
GAINESVILLE, FL・1 DAY AGO
Wildcats Today

Kentucky center Oscar Tshiebwe and point guard Sahvir Wheeler spoke to reporters on Friday, as the Wildcats gear up for another SEC test, this time at home against the Florida Gators.  Tshiebwe spoke on being a selfless teammate, preparing for UF's Colin Castleton and more, while Wheeler ...
LEXINGTON, KY・1 HOUR AGO
Wildcats Today

Kentucky running back Chris Rodriguez Jr. and defensive back Keidron Smith are set to participate in the 74th annual Reese’s Senior Bowl on Saturday, Feb. 4 at Hancock Whitney Stadium in Mobile, Alabama. Kickoff is at 2:30 p.m. ET on the NFL Network. Rodriguez will suit up for the American Team and ...
MOBILE, AL・1 DAY AGO
Wildcats Today

A third former Kentucky Wildcat is headed to Statesboro, Ga. to play for Georgia Southern in 2023.  Rahsaan Lewis, a senior wide receiver out of Orlando, Fla. is making the move to his fourth school in his collegiate career, heading to the Sun Belt to play for the Eagles with former UK ...
STATESBORO, GA・2 DAYS AGO
Wildcats Today

Kentucky will leave National Signing Day batting .500.  3-star lineman William "Woo" Spencer, the No. 444 player in the '23 class — per the On3 Consensus — has announced his commitment to Louisville, choosing the rival Cardinals over the Wildcats. "it was a real hard decision," Spencer said in ...
LEXINGTON, KY・2 DAYS AGO
Wildcats Today

JUST IN: Cason Wallace OUT Against Ole Miss

Kentucky basketball will look for its third road win in a row on Tuesday night against Ole Miss, but it will have to come without Cason Wallace.  The freshman starting guard will miss the matchup against the Rebels due to a leg issue, KSR's Jack Pilgrim reports:  Wallace averages 11.3 ...
OXFORD, MS・2 DAYS AGO
Wildcats Today

Below are game notes from Kentucky basketball's 75-66 win over the Ole Miss Rebels on Tuesday night in Oxford:  Team Records and Series Notes Kentucky is now 15-7 overall, 6-3 in the Southeastern Conference, and has a five-game winning streak in conference play.Ole Miss is 9-13 overall, 1-8 in ...
OXFORD, MS・2 DAYS AGO
Wildcats Today

Injuries always find a way to make their presence felt, often times when you least expect them to.  That was just the case for the Kentucky Wildcats on Tuesday night in Oxford, as it was announced with less than an hour until tipoff that starting guard Cason Wallace would be unavailable for ...
LEXINGTON, KY・2 DAYS AGO
Wildcats Today

Desperation oozed from Kentucky as it took the court inside the SJB Pavilion in Oxford, Miss. on Tuesday night, as it was knotted up 32-32 with the peckish Ole Miss Rebels, who had lost nine of their last 10 games.  The Wildcats entered the matchup directly on the NCAA Tournament bubble, ...
OXFORD, MS・2 DAYS AGO
Wildcats Today

Kentucky head coach John Calipari spoke to the media following the Wildcats' 75-66 win over the Ole Miss Rebels on Tuesday night in Oxford.  The press conference can be seen above:  More on the win over Ole Miss HERE. Game notes from the victory can be found HERE. WATCH: Antonio Reeves, ...
OXFORD, MS・2 DAYS AGO
Wildcats Today

Three Kentucky men’s basketball alumni in Bam Adebayo, Shai Gilgeous-Alexander and Julius Randle were named to the 2023 NBA All-Star Game on Feb. 19 in Salt Lake City. Adebayo and Randle will make their second-career appearances, while Gilgeous-Alexander was selected for the first time. UK’s ...
LEXINGTON, KY・7 HOURS AGO