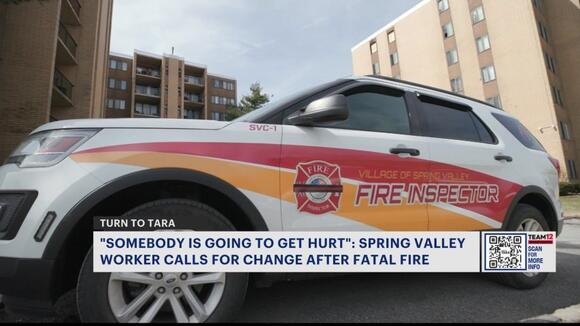 A current Spring Valley village worker who spent years on the front lines of Rockland County's code enforcement crisis spoke with News 12 exclusively about problems he's afraid could lead to another deadly tragedy.

"I'm near the end of my rope, something has got to be done," he says.

The longtime fire inspector says a lack of resources and political will for real change has left him concerned that another Evergreen tragedy could occur.

The fire took the life of an Evergreen resident and firefighter Jared Lloyd.
Youngman has never been willing to share his views on camera, fearful of putting his job at risk or being sued, but says it's important to speak out now.

"I'm hoping that the village opens up their eyes to see what the potential liability they have," he says. "I think people are overall interested in safety, and if people knew what's going on and the fact village not run correctly without any safeguards in place, they'd be up in arms because at the end of day, taxpayers pay for it."

Youngman called out the village board.

"They're running this place into the ground. The mayor says'yes,' they say 'no.' They just don't care. Somebody's going to get hurt. Something's going to happen," he says.

Youngman also has another role as the Hillcrest fire chief and says he was one the responders to the deadly Evergreen fire last year.

Youngman says he questions why Erika Krieger, the state oversight monitor who was placed in Spring Valley several years ago to improve code enforcement, disappeared from the post shortly after the tragedy.

Rockland County is now in charge of oversight and the department with its newly formed task force.

"The county took us over now and rightfully so. The village just wasn't cutting it and I think that the state should have come in here and forced the village to hire people and everything," he says.

In response to Youngman's allegations involving the village board,  Spring Valley Trustee Zack Clerina denied any claims of mismanagement and tells News 12 the departments are properly funded.

News 12 also spent several months trying to reach state officials regarding Krieger's tenure as the oversight monitor but has not yet received a response.

because they are afraid of the hasids so now they literally get away with murder. this county is going down the tubes while the politicians sit with a blind eye.

Our Government is in Bed with the Hasidic Community in Rockland, Orange & ALL Along Route 17 Very Sad how they treat the American People 😢 😥😥

Many who gathered at the Champions Royal Assembly were also still shaken up from the news of the fatal shooting of Councilwoman Eunice Dwumfour.
NEWARK, NJ・23 HOURS AGO
News 12

Authorities say no homes are in danger.
GOSHEN, NY・2 DAYS AGO
News 12

Officers say they responded to a fire on Northern Boulevard before 6 p.m.
NASSAU COUNTY, NY・1 DAY AGO
News 12

Neighbors on John Street say the incident occurred at a townhouse around 8 a.m.
FORT LEE, NJ・1 DAY AGO
News 12

JFK Boulevard in Jersey City will be closed between St. Paul’s Avenue and Nardone Place due to a partial wall collapse.
JERSEY CITY, NJ・34 MINUTES AGO
News 12

Fast-food restaurant Chick-fil-A is coming to Yonkers - but not everyone is happy about it, and one group protested about it today.
YONKERS, NY・10 HOURS AGO
News 12

‘It was a loud noise’ Fallen tree damages car in Paterson

A fallen tree has damaged a car that was parked in the driveway of a Paterson home. It was not clear why the tree fell, but conditions in the area were extremely windy at the time. The car was parked in a driveway of a home on East 24th Street. It happened Friday afternoon.
PATERSON, NJ・2 DAYS AGO
News 12

The Stamford Board of Representatives is expected to take up the matter at a meeting Monday night.
STAMFORD, CT・5 HOURS AGO
News 12

Police are now asking for the public's help and set up electronic boards asking the community for any information connected to Wednesday night's shooting death of Sayreville Councilwoman Eunice Dwumfour.
SAYREVILLE, NJ・1 DAY AGO
News 12

Police hope to be able to reunite students with artwork that has been recovered as a result of the arrest.
FAIRFIELD, CT・1 HOUR AGO
News 12

Fire damages barn and field in Goshen; no injuries reported