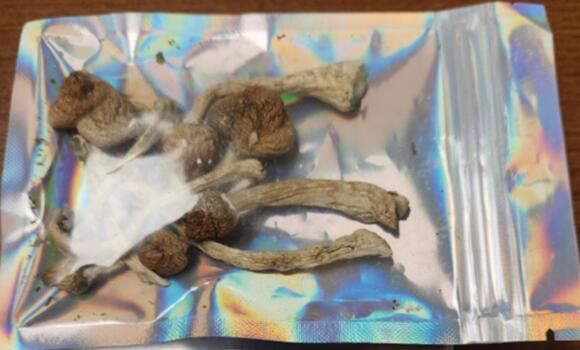 HARLINGEN, Texas ( ValleyCentral ) — A traffic stop in Harlingen resulted in the arrest of two teens accused of having a bag of psychedelic mushrooms in their car, according to the Cameron County Sheriff’s Office.

Alfonso Padilla, 18; and Juan Manuel Noriega, 18; were arrested Monday and charged with possession of a controlled substance in penalty group 2, the sheriff’s office stated Wednesday.

The mushrooms were discovered after a deputy with a K9 officer conducted a traffic stop, according to the sheriff’s office, which did not disclose to media the nature of the alleged traffic violation that preceded the stop.

“The deputy observed in the center console a clear plastic bag with a brown in color substance,” the sheriff’s office stated in a news release. “After a probably cause search of the vehicle, a total of 5.72 ounces of Psilocybin (mushrooms) were recovered from the vehicle.”

Both teenagers were arrested and taken to the Carrizales-Rucker Detention Center in Olmito, officials said.

Psilocybin is a naturally occurring psychedelic compound produced by over 200 species of fungi, according to Wikipedia. The DEA says Psilocybin mushrooms have “slender stems topped by caps with dark gills on the underside” and are sometimes called “magic mushrooms” or “shrooms.”

The mushrooms can cause hallucinations . “Large amounts can cause panic attacks and psychosis, nausea and vomiting, muscle weakness, [and] lack of coordination. Overdose may result in psychosis or death,” the DEA stated.

The mushrooms can be found in the United States, Mexico and Central America.

An invasive water plant is spreading from shore to shore across the Rio Grande -- spanning from Mexico to the United States, and clogging U.S. canals that supply water to South Texas towns. Border Report found spots on the international river completely covered by the plant
TEXAS STATE・1 DAY AGO
BigCountryHomepage