McClain: Browns defense could be ideal for Texans' run game to bounce back 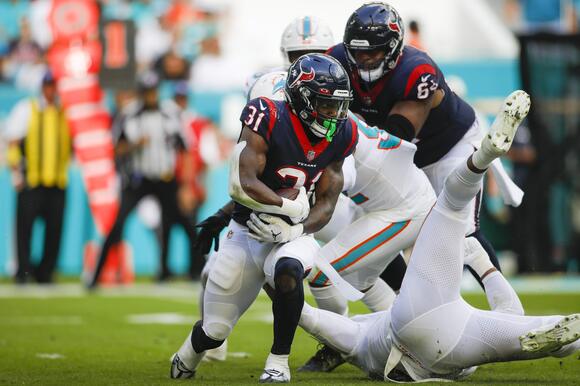 It’s Watson’s first appearance since his last game with the Texans on Jan. 3, 2021. His 11-game suspension ended this week, and he’s replacing Jacoby Brissett as the starter.

Here are observations on Watson, the Texans and Browns as they prepare for Sunday’s game.

BROWNS DON’T KNOW WHAT TO EXPECT FROM WATSON

The Browns know they spent $230 million guaranteed for one of the best quarterbacks in the NFL, but they also know Deshaun Watson hasn’t played for almost two years. The truth is nobody knows what to expect from him in his first game back. He’s bound to be a little rusty, to say the least.

The Texans hope Watson doesn’t play like he did in his last appearance at NRG Stadium, a 41-38 loss to Tennessee in the last game of the 2020 season. He connected on 28-of-39 passes for 365 yards and three touchdowns. Watson threw one interception and finished with a 115.9 rating.

Watson’s last game was witnessed by only 12,504 fans because of the pandemic. It’ll be interesting to see how many Texans’ fans show up.

Will NRG Stadium be loaded up with Browns’ fans as it was for visiting teams at the Philadelphia and Washington games? No matter how many Texans’ fans attend the game, Watson is sure of getting booed.

WATSON WILL HAVE TO INTRODUCE HIMSELF TO TEXANS PLAYERS

Of the Texans who played in Deshaun Watson’s last game, only six are still on the roster. Receiver Brandin Cooks is the only starter remaining from that game against Tennessee who’ll start Sunday. Others who played against the Titans are tight end Jordan Akins, offensive tackle Charlie Heck, safety Jonathan Owens, snapper Jon Weeks and kicker Ka’imi Fairbairn.

Offensive tackles Laremy Tunsil and Tytus Howard didn’t play in that game. Defensive end Jonathan Greenard started that game against the Titans but won’t play against the Browns because he’s injured.

Deshaun Watson was expected to address the media on Wednesday afternoon but didn’t. He got his stuff out of his locker and disappeared. Coach Kevin Stefanski was asked about it and said, “That’s not my department.”

The NFL requires all players who are requested for interviews to show up or risk a substantial fine. Reporters hope to interview Watson on Thursday. If he stiffs them again, he runs the risk of alienating them even more. Not a wise decision for a player in Watson’s predicament.

TEXANS MUST GET OFF TO A BETTER START

The Texans are a league-worst minus-86 in point differential, and it doesn’t matter who plays quarterback – Davis Mills or Kyle Allen.

Allen makes his second start after the 30-15 loss at Miami. Naturally, he hopes to avoid another first-half performance like the Texans have put on in back-to-back losses to Washington and Miami.

The Browns have been a disappointment with a 4-7 record, but they’re coming off an overtime victory over the Bucs. Their defense is 18th (347.6 yards). End Myles Garrett, who leads Cleveland with 10 sacks, could make Allen’s afternoon even more miserable.

The Browns are hoping Watson’s return could ignite a winning streak and make them a contender for the last wild-card playoff berth.

IDEAL GAME FOR PIERCE TO BOUNCE BACK

In their last two losses to the Commanders and Dolphins, the Texans’ running game has been non-existent. Defenses know to load the box to stop Dameon Pierce before he ever gets started and then tee off on the quarterback.

The Texans ran 30 times for 57 yards against Washington and Miami. That’s an average of 1.9 yards a carry. Pierce carried 15 times for 16 yards, a 1.1 average. In the previous two losses to the Eagles and Giants, Pierce averaged 116.5 yards rushing.

So what’s happened besides defenses loading the box? The offensive line, particularly the guards and center, is doing a terrible job of run blocking, getting overpowered and buried by defensive linemen better than they are.

Cleveland would appear to be the ideal defense for Pierce and the run blockers to rebound. The Browns are 23rd in run defense, allowing 131.5 yards a game.

Speaking of running games, Cleveland is fifth with 154.4 yards a game. The Browns have a terrific offensive line that specializes in run blocking, and Nick Chubb is a premier running back who has rushed for 1,039 yards and scored 12 touchdowns. He averages 5.2 yards a carry.

The Texans are coming off an outstanding performance against Miami’s running game. They limited the Dolphins to 66 yards on 26 carries, a 2.5 average. The Texans are still last in run defense, surrendering 168.6 yards – an improvement from the 181 they were allowing.

Because Deshaun Watson needs to throw the ball for the first time in almost two seasons, the Browns may not run as much as they usually would. No matter what strategy they deploy, they should earn a lopsided victory.

John McClain can be heard Tuesday, Wednesday and Friday on Sports Radio 610 and Monday and Thursday on Texans Radio. He write three times a week and does three Houtopia Podcasts for SportsRadio610.com . He also can be read four times a week on GallerySports.com .

When the Cincinnati Bengals take on the Kansas City Chiefs in the AFC title game on Sunday night, they’ll be doing it without three of their starting offensive linemen as La’el Collins, Alex Cappa and Jonah Williams will all be sidelined from the game with injuries. The three...
CINCINNATI, OH・1 DAY AGO
610AM Sports Radio

If the Texans want to hire Ryans, they should hope Walton and Penner handle the negotiations like their Walmart slogan says: “Save Money, Live Better.”
DENVER, CO・2 DAYS AGO
Miami Herald

Dolphins set to hire Vic Fangio as next defensive coordinator

D.J. Williams could have followed his father's footsteps in the NFL, but evolving into a NFL coordinator of head coach may be his calling.
GRAMBLING, LA・33 MINUTES AGO
All Hurricanes

Joshisa Trader Recruiting Update, Plus Discussion Regarding His Best Skill

(WHTM) — Nick Sirianni has led the Philadelphia Eagles to new heights. The head coach set a franchise record for most wins in a regular season (14) and has his Eagles one game away from the Super Bowl. Sirianni and the Eagles will now face the San Francisco 49ers in the NFC Championship Game. But […]
PHILADELPHIA, PA・37 MINUTES AGO
610AM Sports Radio

Schaub joined In The Loop on Wednesday to discuss Ryans as a head coaching candidate, what it was like playing with him and also offers his opinion on current Texans quarterback Davis Mills and the NFL Draft prospects.
HOUSTON, TX・2 DAYS AGO
FastBreak on FanNation

Kemba Walker is in attendance at Sunday's game between the Miami Heat and Charlotte Hornets (earlier this season, he played for the Dallas Mavericks).
MIAMI, FL・23 MINUTES AGO