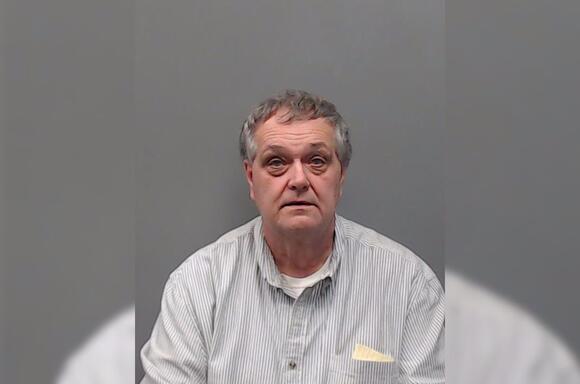 TYLER, Texas ( KETK ) – A Bullard man was sentenced to 16 years in prison on Wednesday after pleading guilty to tampering with a human corpse.

Charles Lennon II, 60, was arrested in 2018 with his son in connection to the death of Rachel Lynn Jackson, 31 of Tyler, whose body was found in a trash bin in Bullard.

Lennon’s son Charles Lennon III pleaded guilty to her murder in April 2019 and was sentenced to life in prison. Lennon had previously been charged with the capital murder of Jackson before a grand jury declined to indict him, and he was instead charged with tampering with a corpse.

Officials said Lennon allegedly told investigators at the time he found Jackson’s body wrapped in a blanket on the porch of a mobile home and watched his son dump her body into a trash bin.

Lennon was charged “because of his involvement in attempting to conceal the body,” according to a press release from 114th District Court Judge Reeve Jackson.

For the latest news, weather, sports, and streaming video, head to KETK.com | FOX51.com.

HENDERSON COUNTY, Texas (KETK) – A woman was arrested in Henderson County early Monday morning for an outstanding arrest warrant and felony drug charge. According to the sheriff’s office, a deputy went to Solar Laundry to follow up on a theft case around 1 a.m. when he found Gina Larkie, 42 of Mabank, who had […]
HENDERSON COUNTY, TX・1 HOUR AGO
KETK / FOX51 News

CARTHAGE, Texas (KETK) – Carthage Police Department said they found a black male with gunshot wounds while responding to a 911 call about a shooting around 3:04 a.m. on Sunday. The shooting took place on the 600 block of South Adams Street in Carthage and there was no suspect on the scene, according to officials. […]
CARTHAGE, TX・1 DAY AGO
KETK / FOX51 News

SHELBY COUNTY, Texas (KETK) – The Shelby County Sheriff’s Office said they are asking for help in identifying individuals involved in a burglary. According to Shelby County officials, the crime took place on Jan. 29 at James Grocery at approximately 3:30 a.m. and officials are asking for people who reside in that area to check […]
SHELBY COUNTY, TX・2 HOURS AGO
KETK / FOX51 News

KEMP, Texas (KETK) – An Amber Alert has been issued for Xyavier Calliste Jr. from Kaufman County. Calliste is a 15-week-old Black male with brown eyes, black hair and is 23 inches tall, weighing 8 pounds, according to Kemp Police Department. Calliste was last seen in an unknown vehicle with Abigail Margaret Williams, a 23-year-old […]
KAUFMAN COUNTY, TX・3 DAYS AGO
KETK / FOX51 News

HENDERSON, Texas (KETK) – Rusk County Office of Emergency Management announced that a vehicle crashed into a residence on the 500 block of South Marshall Street Sunday morning. According to officials, Henderson Fire Department and Henderson Police Department responded to the scene. Injuries were reported and there was also a minor gas leak, officials said.
HENDERSON, TX・1 DAY AGO
KETK / FOX51 News

HALLSVILLE, Texas (KETK) – Police departments throughout East Texas are adding Narcan as a tool to save people’s lives. Hallsville Police Officer Ryan Waldow says he saw a need for access to Narcan while on a call. “We’re trying to be proactive and trying to make sure that if that need does arise that we […]
HALLSVILLE, TX・2 DAYS AGO
KETK / FOX51 News

KILGORE, Texas (KETK) – Kilgore Police Department is asking for the public’s help in identifying three persons from in a video of a gas station burglary they released. The video shows three people going through the business at 1710 US Hwy 259 around 3:45 a.m. on Jan. 24. In the video one person is seen […]
KILGORE, TX・3 DAYS AGO
KETK / FOX51 News

CHEROKEE COUNTY, Texas (KETK) – Three people, who have since been identified, were arrested Tuesday night in Cherokee County after two people reported to have been held hostage. According to Cherokee County Sheriff Brent Dickson, two people arrived at the Wells Police Department, and said they had been held hostage at gunpoint in their home. […]
CHEROKEE COUNTY, TX・5 DAYS AGO
KETK / FOX51 News

RUSK COUNTY, Texas (KETK) – A Rusk County logger was indicted by a grand jury on a felony charge of timber purchase with intent to defraud, according to the Texas A&M Forest Service. The forest service said in a release on Thursday that Terry Aron Beall, 57 of Henderson, who did business as 2-Beall Logging, […]
RUSK COUNTY, TX・4 DAYS AGO
KETK / FOX51 News

PALESTINE, Texas (KETK) – A Palestine man was arrested Tuesday afternoon after allegedly breaking into a vehicle. According to police, they received a call just after 1 p.m. on Tuesday from the 900 block of Campbell Street about reports of a vehicle burglary. A resident said they saw a white man in a dark hoodie […]
PALESTINE, TX・5 DAYS AGO
KETK / FOX51 News

MARSHALL, Texas (KETK) – A Marshall man has pleaded guilty to making false and fraudulent statements to procure unwarranted tax refunds, according to Brit Featherston, U.S Attorney for the Eastern District of Texas. Boyd Lynn Butcher, 50, has agreed to pay over $300,000 dollars in restitution as a part of his guilty plea. According to […]
MARSHALL, TX・3 DAYS AGO
KETK / FOX51 News

UPDATE: Xyavier Calliste Jr. was found around 2 a.m. Friday morning with his mother Abigail Williams, 23, in North Carolina. Kemp Police said the two were picked up at a bus terminal in Fayetteville with assistance from the town’s police department. Williams is presumed by Kemp Police to have taken the infant to Dallas from […]
KAUFMAN COUNTY, TX・3 DAYS AGO
KETK / FOX51 News

LONGVIEW, Texas (KETK) – Longview Police are asking for public assistance in locating a missing Longview man. LaShun David Farrow, 34, was reported missing by his family on Jan. 23. He is approximately 5’8″ and weighs around 165 pounds. He has black hair and brown eyes, and tattoos on both arms. If you have any […]
LONGVIEW, TX・3 DAYS AGO
KETK / FOX51 News

HENDERSON, Texas (KETK) – A lawsuit was filed against Henderson ISD on Tuesday that alleges the district ignored the bullying of a middle school student and retaliated against her mother after she made complaints. According to the lawsuit, the student, who is identified in the lawsuit as a “person with a disability,” was a student […]
HENDERSON, TX・5 DAYS AGO
KETK / FOX51 News

TYLER, Texas (KETK) — KETK News sat down with newly-sworn in Constable Ralph Caraway Jr. to talk about his future in that office, and the reputation he plans to rehabilitate. “We want to let people know that Precinct 1 is here, Precinct 1 is back and Precinct 1 is restored,” Caraway said. The previous Precinct […]
SMITH COUNTY, TX・5 DAYS AGO