QB Transfer Portal Tracker: Who Will Replace Will Levis? 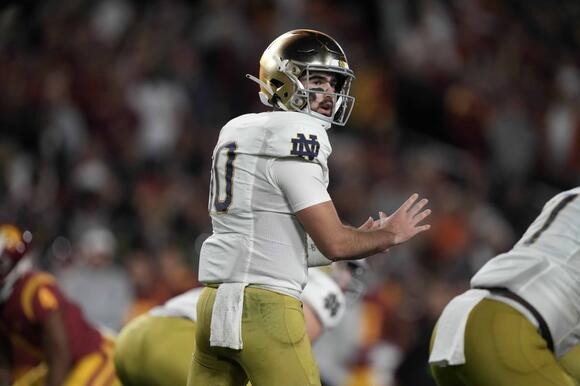 The departure of Will Levis will see the most talented quarterback of the Mark Stoops era head to the NFL, leaving Kentucky with a gaping hole at one of its most important skill positions.

Three QBs are currently slated to return to Lexington next season, but none of the trio are expected to be the heir apparent, thus leading Kentucky to the almighty transfer portal.

With the portal opening on Dec. 5, thousands of players — many of whom reside under center — will officially be on the market, fielding offers as they search for a new home. The Wildcats will certainly be on the hunt for a new QB.

Below is a tracker of D1 quarterbacks that have entered the portal. * There have been no reports of any of the these players being linked to Kentucky, this is merely a list of QBs who will be available in the portal.*

This tracker will be updated periodically as new QBs enter the portal, or as QBs on the tracker announce the program they plan to play for in the 2023 season:

Wildcats Today will have periodic updates as QBs enter and exit the transfer portal this offseason.

Want the latest on national football and basketball recruiting, including Cats targets? Head over to SI All-American for the latest news, blogs, and updates about the nation's best prospects.

Sports Illustrated also offers insight, information and up to the minute details for gamblers. Check it out here .

Then why recruit the players you have on your current team if they aren’t going to succeed Levis. Either A. They aren’t good enough in the first place to recruit . Or B. You aren’t developing them.

A third former Kentucky Wildcat is headed to Statesboro, Ga. to play for Georgia Southern in 2023.  Rahsaan Lewis, a senior wide receiver out of Orlando, Fla. is making the move to his fourth school in his collegiate career, heading to the Sun Belt to play for the Eagles with former UK ...
STATESBORO, GA・1 HOUR AGO
Wildcats Today

It took until the original National Signing Day date, but Kentucky football has pulled off a monumental flip for the 2023 class.  Kendrick Gilbert — a 4-star defensive lineman out of Indianapolis Cathedral High School in Indiana — has flipped his commitment from Purdue, opting to head to ...
LEXINGTON, KY・4 HOURS AGO
Wildcats Today

Below are game notes from Kentucky basketball's 75-66 win over the Ole Miss Rebels on Tuesday night in Oxford:  Team Records and Series Notes Kentucky is now 15-7 overall, 6-3 in the Southeastern Conference, and has a five-game winning streak in conference play.Ole Miss is 9-13 overall, 1-8 in ...
OXFORD, MS・13 HOURS AGO
Wildcats Today

JUST IN: Cason Wallace OUT Against Ole Miss

Kentucky basketball will look for its third road win in a row on Tuesday night against Ole Miss, but it will have to come without Cason Wallace.  The freshman starting guard will miss the matchup against the Rebels due to a leg issue, KSR's Jack Pilgrim reports:  Wallace averages 11.3 ...
OXFORD, MS・17 HOURS AGO
Wildcats Today

Desperation oozed from Kentucky as it took the court inside the SJB Pavilion in Oxford, Miss. on Tuesday night, as it was knotted up 32-32 with the peckish Ole Miss Rebels, who had lost nine of their last 10 games.  The Wildcats entered the matchup directly on the NCAA Tournament bubble, ...
OXFORD, MS・14 HOURS AGO
Wildcats Today

Kentucky is back on the road for its fifth road game in SEC play, traveling down to Oxford, Miss. to take on the scrambling Ole Miss Rebels.  The fifth season of the Kermit Davis era down on The Grove hasn't gone according to plan, as the Rebels hold a 9-12 record, including a horrid 1-7 ...
OXFORD, MS・1 DAY AGO
Wildcats Today

Injuries always find a way to make their presence felt, often times when you least expect them to.  That was just the case for the Kentucky Wildcats on Tuesday night in Oxford, as it was announced with less than an hour until tipoff that starting guard Cason Wallace would be unavailable for ...
LEXINGTON, KY・7 HOURS AGO
Wildcats Today

Kentucky basketball has been a streaky team when it comes to betting this season.  After going on a stretch of 11 games without covering a spread, the Wildcats rang off four covers in a row, each one coming with a victory that slowly pulled UK out of the hole it dug itself across the first ...
OXFORD, MS・20 HOURS AGO
Wildcats Today

LEXINGTON, Ky. — As losses began to pile on top of Kentucky, each defeat felt more damning than the next. Another season that began with hopes of hanging banners quickly puckered, as the Wildcats suffered through a gut-wrenching string of games that began to leave the gold standard on the fringe of ...
LEXINGTON, KY・2 DAYS AGO
Wildcats Today

How to Watch, Listen: Kentucky-Ole Miss

After failing to conquer the Kansas Jayhawks over the weekend, the Kentucky Wildcats now hit the road once again for another SEC showdown.  This time, coach John Calipari's Cats are down in Oxford, Miss. to take on the Ole Miss Rebels, who're seeking just their second win in conference play ...
LEXINGTON, KY・1 DAY AGO
Wildcats Today

Kentucky men’s basketball freshman Cason Wallace picked up Southeastern Conference Freshman of the Week laurels on Monday after averaging 12.0 points, 5.5 boards, 3.0 assists and 2.5 steals for the week as the Wildcats split games at Vanderbilt and at home against No. 9 Kansas. The award is the ...
LEXINGTON, KY・2 DAYS AGO
Wildcats Today

Kentucky basketball assistant coach KT Turner spoke to reporters on Monday morning before the Wildcats made their way down to Oxford to take on the Ole Miss Rebels on Tuesday night.  The presser can be seen above:  More on Kentucky's loss to Kansas HERE. Kentucky is leaving the KU loss ...
LEXINGTON, KY・2 DAYS AGO