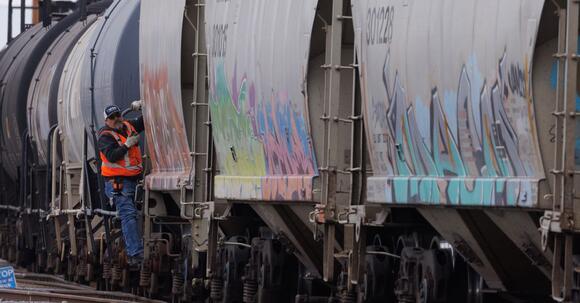 WASHINGTON, Nov 30 (Reuters) - The U.S. House of Representatives on Wednesday voted to approve a bill to block a potentially crippling railroad strike and to mandate paid sick time for rail workers.

Lawmakers voted 290-137 to impose a tentative contract deal reached in September on a dozen unions representing 115,000 workers after President Joe Biden warned of the catastrophic impact of a rail stoppage that could begin as early as Dec. 9.

The House separately voted 221-207 to give seven days of paid sick leave to railroad employees, but that faces an uncertain fate in the Senate. Democrats and some Republicans have expressed outrage over the lack of paid short-term sick leave for railroad workers.

"We know much more needs to be done for railroad workers," House Speaker Nancy Pelosi said ahead of the votes. "No one should be at risk of losing his or her job by staying home when sick, needing to see a doctor or getting lifesaving surgery."

A rail strike could freeze almost 30% of U.S. cargo shipments by weight, stoke already surging inflation and cost the American economy as much as $2 billion per day, and strand millions of Amtrak and commuter rail passengers.

After the vote, Biden called on the Senate to act "urgently."

"Without the certainty of a final vote to avoid a shutdown this week, railroads will begin to halt the movement of critical materials like chemicals to clean our drinking water as soon as this weekend," he said in a statement.

Asked if Biden supported the separate House measure to require sick leave, White House Press Secretary Karine Jean-Pierre said that the president broadly supports paid sick leave for all Americans "but he does not support any bill or amendment that would delay getting this bill to his desk."

Railroads and the U.S. Chamber of Commerce oppose amending the contract deal that was struck in September largely on the recommendations of an emergency board appointed by Biden.

The influential business lobby group said the sick leave, if passed and signed into law, "would impose an unworkable, one-sided modification to a labor agreement."

Biden on Monday praised the proposed contract that includes a 24% compounded pay increase over five years and five annual $1,000 lump-sum payments, and had asked Congress to impose the agreement without any modifications.

There are no paid short-term sick days under the tentative deal after unions asked for 15 and railroads settled on one personal day.

"This all could have been avoided had the railroads been willing to provide their employees with a basic protection and what so many Americans already have: paid sick time," House Transportation Committee chair Peter DeFazio said.

Eight of 12 unions have ratified the deal. But some labor leaders have criticized Biden for asking Congress to impose a contract that workers in four unions have rejected over its lack of paid sick leave.

Both Transportation Secretary Pete Buttigieg and Labor Secretary Marty Walsh are set to speak to Senate Democrats on Thursday about the rail labor issue.

i thought most labor unions donate heavily to the democratic party so that the democrats would help them out when they needed it like qid pro quo was I wrong in thinking that or are a lot of union members feeling betrayed right now? what would happen if they went on strike even when Joe told them no you cant strike take what they are willing to give be glad they dont take away anything?

I listened to a railroad worker this morning he's been employed 25 years he says it's all about paid sick leave and the railroad does not give them any days.

Sadly union members will take it and still vote Democrat in 2024. they are like the forest voting for the ax. They know it hurts, but they don't know any different.

Fewer than one-third of Americans believe that House GOP leaders are prioritizing the country's most important issues, according to a new CNN Poll conducted by SSRS. Neither party's congressional leadership earns majority approval, and Republicans are particularly likely to express discontent with their own party leadership.
1 DAY AGO
Reuters

WASHINGTON, Jan 26 (Reuters) - Senator Debbie Stabenow thwarted a bid on Thursday by fellow Democrat Joe Manchin to pass a measure that would block some electric vehicles from receiving a $7,500 tax credit.
WASHINGTON STATE・1 DAY AGO
Reuters

Explainer-When is the State of the Union 2023? Date of Biden's address and what to expect

WASHINGTON, Jan 26 (Reuters) - U.S. President Joe Biden will deliver his first State of the Union address after Republicans took control of the House of Representatives in a speech that may mark the unofficial start of the 2024 presidential campaign season.
WASHINGTON STATE・1 DAY AGO
Reuters

Footage from attack on Paul Pelosi released by authorities

WEARE, New Hampshire Jan 27 (Reuters) - When Donald Trump trounced his Republican rivals in New Hampshire's 2016 primary, the stunning win announced to other states the reality TV showman was a serious contender. Trump went on to capture the Republican nomination and then the White House.
IOWA STATE・1 DAY AGO
Reuters

WASHINGTON, Jan 25 (Reuters) - Republicans who control the U.S. House of Representatives are divided over how hard a line to take on the debt ceiling, but were united on Wednesday in demanding that Democratic President Joe Biden agree to negotiate on spending as part of any deal.
UTAH STATE・2 DAYS AGO
Reuters

Jan 27 (Reuters) - Former Vice President Mike Pence said on Friday he had not been aware that classified documents were at his Indiana home and said he takes "full responsibility" for the security breach.
INDIANA STATE・19 HOURS AGO
Reuters

WASHINGTON (Reuters) -A group of prominent Democratic U.S. senators including Majority Leader Chuck Schumer asked the Federal Trade Commission (FTC) on Thursday to open an investigation into a company they said is marketing a rifle to children.
CALIFORNIA STATE・1 DAY AGO
Reuters

WASHINGTON, Jan 27 (Reuters) - The United States is deeply concerned about recent violence in Israel and the West Bank and believes there is an urgent need for all parties to de-escalate in the region, White House National Security Council spokesman John Kirby said on Friday.
WASHINGTON STATE・23 HOURS AGO
Reuters

Jan 26 (Reuters) - Ukrainian government officials who shirk their duties during wartime will be quickly removed, a top aide to President Volodymyr Zelenskiy said on Thursday amid a crack down on corruption.
1 DAY AGO
Reuters

Jan 25 (Reuters) - Donald Trump could learn soon whether he or any associates will be charged or cleared of wrongdoing in a Georgia probe into his efforts to overturn his 2020 election defeat, one of a series of legal threats looming over the Republican former U.S. president:
GEORGIA STATE・2 DAYS AGO
Reuters

MADRID, Jan 27 (Reuters) - The new president of Venezuela's opposition legislature is confident the United States will back the body by continuing to protect foreign assets like oil refiner Citgo Petroleum from creditors, she said on Friday.
19 HOURS AGO
Reuters

WASHINGTON, Jan 26 (Reuters) - President Joe Biden cast Republicans as representing the party of "chaos and catastrophe" on Thursday and sharply criticized their refusal to approve an increase in the U.S. debt ceiling unless they get a deal on spending cuts.
GEORGIA STATE・1 DAY AGO
Reuters

BRUSSELS, Jan 27 (Reuters) - Plans by the European Commission to create new European Union funding for the green industry are facing mounting opposition in the 27-nation bloc, as seven EU countries openly rejected the idea in a letter to the EU executive.
1 DAY AGO
Reuters

WASHINGTON, Jan 27 (Reuters) - Over two dozen U.S. representatives on Friday called on top U.S. climate envoy John Kerry to urge the United Arab Emirates to withdraw its appointment of the head of its state oil company as president of the COP28 climate summit it will host this year.
CALIFORNIA STATE・18 HOURS AGO
Reuters

EU president says Ukraine has unconditional support ahead of summit

FRANKFURT, Jan 28 (Reuters) - European Commission President Ursula von der Leyen said ahead of an EU-Ukraine summit next week that Ukraine had unconditional support from the bloc and that the country needed to prevail against Russian attacks to defend European values.
5 HOURS AGO