Jodie Sweetin Has An A+ Idea For Another Full House Series, And Betty White Would Be Proud 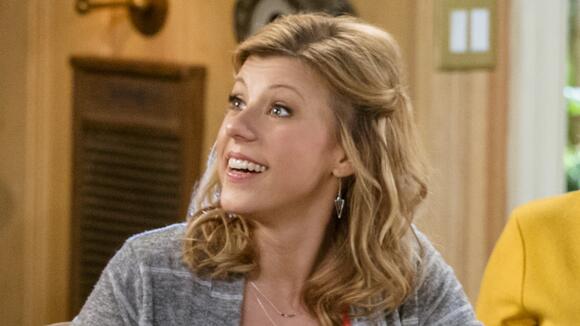 With 2023 just over the horizon, bringing a smorgasbord of new and returning shows along with it, the chances of the Tanner family returning to the small screen aren’t overwhelmingly high. Between the tragic death of Bob Saget, co-star Candace Cameron Bure’s current duties at GAF ( controversial as they may be ), John Stamos’ various TV gigs and more, there just doesn’t seem to be the time or availability to make anything happen in the near future. But Jodie Sweetin has a pretty stellar idea for how to eventually bring the Tanners back to the small screen, and the late comedy queen Betty White would probably offer a giggly seal of approval for it.

Speaking with E! News about the TV role that turned her into a household name through the decades that followed, Sweetin offered her proposal for how she’d want to return as Stephanie Tanner in the future, though possibly a bit deeper into the future than fans would expect. She’d like to catch up with the San Fran fam again when they’re in their golden years. In her words:

Jodie Sweetin would probably need to grow another few inches, while also pitching her voice deeper, in order to truly embrace her inner Bea Arthur. But it’s not like a second Full House continuation series would actually be a parody of Golden Girls or anything. Although I could actually see Andrea Barber’s Kimmy Gibbler slotting into the Sophia role, even if the age differences wouldn’t match up. Pretty sure we would need one or both of the Olsen twins to return as Michelle Tanner to make the female quartet whole, but that’s probably the least likely element to work out.

While that particular idea is more of a random shot in the dark at how a return could work for these characters, Sweetin doesn’t actually know if such an idea is feasible. But while nothing is currently in the works, she reflected on how unlikely a Full House follow-up seemed in the years immediately following its conclusion, saying:

Jodie Sweetin will be 60 years old in another 20 years, which is slightly younger than three of the Golden Girls stars were when that show debuted. (Rue McClanahan was around 12 years younger than her co-stars.) So maybe don't set your 2042 calendars for the next Full House iteration just yet, but don't be wholly surprised if the Tanner family returns in some form.

Of course, that would probably mean the current backlash against Candace Cameron Bure over her GAF holiday movie comments regarding content focusing on "traditional marriages," which many have inferred as being a slight against the LGBTQ+ community, considering Bure left Hallmark Channel as it started becoming more inclusive with its programming. Sweetin herself has aligned with those speaking out against Bure, such as Holly Robinson Peete and JoJo Siwa, which reportedly led to Bure unfollowing Sweetin on social media . Will that be water under the bridge 20 years from now?

All five seasons of Fuller House are available to stream with a Netflix subscription , while Full House ’s eight-season run can be streamed in full with an HBO Max subscription . (Hulu is where the Golden Girls remain lively and thriving these days.)

A key piece of information about the Frasier revival has been revealed that will make it a lot easier to have crossovers with the Cheers characters.
MASSACHUSETTS STATE・1 DAY AGO
Cinemablend

Kathy Bates Is Coming To TV To Reboot A Classic Series, And I’m Already Sold

A legendary legal crusader is coming back to TV, with Kathy Bates playing a new version of an old favorite.
2 DAYS AGO
Cinemablend

Shotgun Wedding: 12 Thoughts I Had While Watching The Jennifer Lopez Rom-Com

I watched Jennifer Lopez's Shotgun Wedding, and it brought up several thoughts for me.
1 DAY AGO
Cinemablend

Andy Cohen has seemingly chimed in on the rumors surrounding The Real Housewives of New York City: Legacy.
2 DAYS AGO
Cinemablend

Girls Trip 2 has been making some progress, and Tiffany Haddish responded to the backlash over her returning for the sequel.
14 HOURS AGO
Cinemablend

Britney Spears Calls Out Alyssa Milano, Who Doesn't Know Her, Over Post About Her

Here's what Britney Spears had to say about Alyssa Milano's post about her.
1 DAY AGO
Cinemablend

After getting his Kim Kardashian tattoos removed, Pete Davidson shaved his head.
1 DAY AGO
Cinemablend

Jessica Simpson Talks Getting Seduced By An A-Lister, But I'm Totally Distracted By This Side Story Of An 'NSYNC Singer Sleeping In His Car

Jessica Simpson's short story Movie Star reveals that in 2001 she was seduced by an A-lister and an 'NSYNC member was living out of their car.
16 HOURS AGO
Cinemablend

Drew Barrymore shares why 1998's Ever After was an empowering moment in her career.
20 HOURS AGO
Cinemablend

Night Court Renewed For Season 2 At NBC, And That's Not All For Melissa Rauch And John Larroquette's Show

NBC already renewed Night Court for Season 2, and that's not the only interesting news for the show starring Melissa Rauch and John Larroquette.
10 HOURS AGO
Cinemablend

Austin Butler shares his own memories getting to know the late daughter of Elvis Presley.
1 DAY AGO
Cinemablend

When addressing his return to Night Court, John Larroquette named one element about his legendary character he's happy to retire.
2 DAYS AGO
Cinemablend

Ashton Kutcher opens up about how awkward it was working with now-wife Mila Kunis on That '70s Show as opposed to That '90s Show.
9 HOURS AGO
Cinemablend

The stars of Netflix's Freeridge opened up about the moments they truly felt in sync with their characters while filming Season 1.
21 HOURS AGO
Cinemablend

The That '70s Show actor recently spoke to what's been going on with his life ahead of his return to rom-coms.
2 DAYS AGO
Cinemablend

Goonies 2? What The Cast And Steven Spielberg Have Said About A Sequel To The Classic Over The Years

The Goonies 2 has been talked about for nearly 40 years, what have those involved said about a possible sequel?
1 DAY AGO
Cinemablend

Sarah Michelle Gellar Has Tons Of Career Wins, And Buffy Praise From Dolly Parton Is Apparently High On The List

Sarah Michelle Gellar's career may have peaked early thanks to kind words from Dolly Parton.
17 HOURS AGO
Cinemablend

Watch Portia De Rossi surprise Ellen DeGeneres with a sweet vow renewal (which featured Kris Jenner) during her own birthday.
10 HOURS AGO