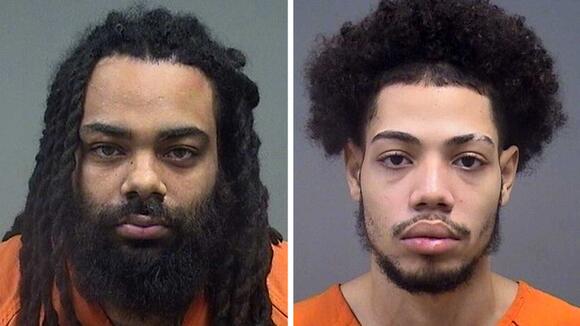 YOUNGSTOWN, Ohio (WKBN) — Police Tuesday and early Wednesday arrested two people in two separate chases, finding a gun in one of the cars they were chasing.

Booked into the Mahoning County Jail on charges of failure to comply with the order or signal of a police officer and improper handling of a firearm in a motor vehicle was Brayan Colon Rodriguez, 19.

Booked into the jail on a charge of failure to comply with the order or signal of a police officer and a warrant from the Adult Parole Authority was Jevon Fitzgerald, 30, of Boardman.

Both men are expected to be arraigned later Wednesday in municipal court.

Colon Rodriguez was arrested following a chase that began at about 12:40 a.m. Wednesday after an officer tried to pull over a car he was driving at Erie Street and Williamson Avenue because it did not have a registration sticker.

The car failed to stop and was traveling at speeds almost double the speed limit before police terminated the chase before Colon Rodriguez crossed over to the other side of Market Street.

A short time later, officers found that the car had crashed into a utility pole on Oak Hill Avenue. Colon Rodriguez was found in the parking lot of the old Anthony’s By The River at Oak Hill and Mahoning avenues. Inside the car, police found a 9mm handgun with a loaded 21-round extended magazine, reports said.

At about 2:25 p.m., Fitzgerald was arrested after a chase that was originally called off after officers tried to pull him over at South and East Myrtle avenues for excessive window tint.

Reports said Fitzgerald would not stop for police and was weaving in and out of traffic, as well as running a red light at Market Street and East Woodland Avenue. Police called the chase off but minutes later were informed that the car Fitzgerald was driving collided with another car on Interstate 680 North near the Salt Springs Road exit.

When police arrived, reports said Fitzgerald climbed out of the sunroof of the car and ran away. He was caught a short time later. Reports said he later apologized to police and admitted he was driving.

Toddler injured in multiple car crash on I-680 in Youngstown

Crews were called to mile marker 5 at the Glenwood Avenue exit shortly before 8:30 a.m.
YOUNGSTOWN, OH・2 DAYS AGO
WKBN

Crews on scene for house fire in Campbell

A large fire is is brewing from a home in Campbell Saturday afternoon.
CAMPBELL, OH・18 HOURS AGO
WKBN

As nearly 2,000 East Palestine residents are affected by a mandatory evacuation, others are under a shelter-in-place.
EAST PALESTINE, OH・10 HOURS AGO
WKBN