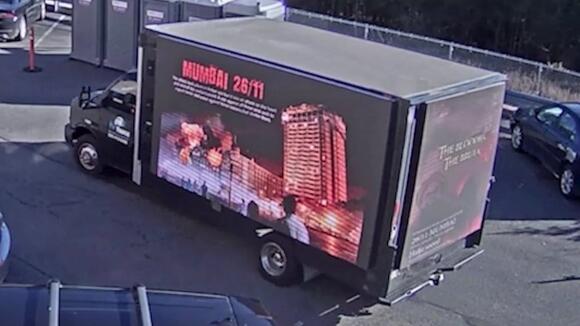 A mosque in Middlesex County is calling for an investigation after a truck with anti-Muslim imagery was seen circling several Islamic centers in the state.

One of the incidents happened Saturday afternoon at the Muslim Center of Middlesex County in Piscataway during a large gathering. The incident left members concerned and even scared that someone could come to a place of worship to intimidate and harass its members.

The truck features a digital billboard that displayed images of the 2008 Mumbai, India attacks. The truck circled the property several times before leaving.

A similar incident happened several hours later at the North Brunswick Islamic Center. A third mosque in Edison may have also been targeted.

Mosque leaders and members of the Council on American Islamic Relations called on local officials and law enforcement officers to take the incidents seriously.

“This is an attempt to intimidate the Muslim community. This is a coordinated effort to cause disruption and maybe cast shame or blame on the Muslim community for an incident that happened long ago in another country and has nothing to do with the people that are here residing in this state, says Selaedin Maksut, executive director of CAIR-NJ. ‘We’re calling on elected officials in these cities and towns and the county to condemn this incident.”

News 12 New Jersey is told that the driver of the truck was a woman. The truck may have had Pennsylvania license plates and may have been coming from an event in New York.

CAIR-NJ is asking for mosques to help in the investigation by reviewing their surveillance videos to see if there is any evidence that could assist police officers.

Now we’re going to attack religion …. Get real …… it’s only a belief in God 😎… so long as you believe in one ☝️ God … we’re good 👍… I think it’s people that puts all the hate in it

Many who gathered at the Champions Royal Assembly were also still shaken up from the news of the fatal shooting of Councilwoman Eunice Dwumfour.
NEWARK, NJ・1 DAY AGO
News 12

Police say the off-duty officer arranged on social media to meet up with the seller of a car on Ruby Street in East New York.
BROOKLYN, NY・12 HOURS AGO
News 12

Fast-food restaurant Chick-fil-A is coming to Yonkers - but not everyone is happy about it, and one group protested about it today.
YONKERS, NY・11 HOURS AGO
News 12

Police hope to be able to reunite students with artwork that has been recovered as a result of the arrest.
FAIRFIELD, CT・1 HOUR AGO
News 12

JFK Boulevard in Jersey City will be closed between St. Paul’s Avenue and Nardone Place due to a partial wall collapse.
JERSEY CITY, NJ・1 HOUR AGO
News 12

Women in NABW rise in ranks of leadership within Brooklyn chapter

There's a changing of the guard for the National Association of Black Military Women in Brooklyn and across the nation.
BROOKLYN, NY・4 HOURS AGO
News 12

The artwork is on display on the third floor at the Arsenal in Central Park.
NEW YORK CITY, NY・6 HOURS AGO
News 12

Officials say that several NJ Transit buses were destroyed by fire in April 2022.
2 DAYS AGO
News 12

A police-involved shooting has left a 49-year-old man in critical condition after police say he assaulted a woman in Grand Concourse.
NEW YORK CITY, NY・12 HOURS AGO
News 12

According to Middletown Mayor Tony Perry, four men tried a different tactic in their attempt to steal cars Sunday morning - they rented their getaway car off an app known as Turo.
HOLMDEL, NJ・10 HOURS AGO
News 12

The struggle to survive continues for an NYPD officer after he was shot in an attempted robbery Saturday.
NEW YORK CITY, NY・9 HOURS AGO
News 12

Last week, many migrants were forced to relocate to the terminal shelter after a stand-off between the city and asylum seekers. They camped outside the Watson Hotel in the city for several days.
BROOKLYN, NY・1 DAY AGO
News 12

A North Carolina man was sentenced to 25 years for an armed Yonkers home invasion back in 2018.
YONKERS, NY・4 HOURS AGO
News 12

‘We are all united.’ Paterson steps up to support Turkey and Syria after earthquake kills thousands

Paterson Mayor Andre Sayegh has made calls and plans to do everything he can to help those in Turkey after a 7.8 magnitude earthquake killed thousands on Monday.
PATERSON, NJ・4 HOURS AGO
News 12

Rosa Lopez's stepdaughter said her father and Lopez were returning to their apartment Friday around 5:30 p.m. when Lopez wandered off from the car.
BRONX, NY・1 DAY AGO