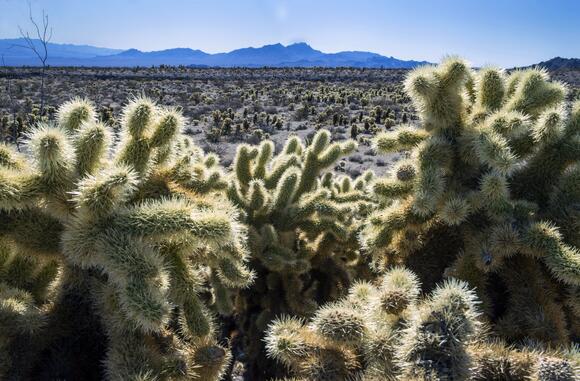 The administration is also readying a proclamation that could declare the mountain and roughly 450,000 acres around as a national monument, the Washington Post reported .

Native Americans say the land there is sacred, and the monument declaration enjoys the broad support of tribes, local officials, and environmental groups that have fought for decades to protect the tribal, cultural, and ecological property surrounding it.

Congress also voted two decades ago to preserve the mountain and 33,000 acres surrounding it.

The national monument announcement would place nearly the entire southern tip of Nevada off-limits to development under the 1906 Antiquities Act in what is expected to be Biden’s largest land conservation declaration this term.

It could also push out renewable energy projects in the state, such as solar and wind power.

The expanse of Nevada is considered to be among the nation’s best prospects for clean energy development. It is also home to major solar farms, more than 100 visible wind turbines, and dozens of mining claims for rare earth elements critical for U.S. development of electric vehicle batteries.

But the area has also been the center of protests from environmental activists, who have pushed to safeguard critical tribal, cultural, and ecological property.

then the government will own LAKE MEAD......AND THE WATER RIGHTS........YOU BETTER THINK ABOUT THAT

A high-ranking government official who has been asked by Hunter Biden to launch an investigation in connection to his abandoned laptop has long-standing ties to President Joe Biden and his family, records show.
DELAWARE STATE・1 DAY AGO
WashingtonExaminer

FBI search of Biden University of Delaware archive may be next

The University of Delaware may be the next target for federal authorities scouring President Joe Biden’s records for classified documents.
NEWARK, DE・2 DAYS AGO
WashingtonExaminer

President Joe Biden will deliver remarks on the state of the economy on Friday after the latest job report exceeded expectations and offered the president a boost days before the State of the Union.
WASHINGTON STATE・1 DAY AGO
WashingtonExaminer

As Biden teases reelection bid in Philadelphia, reminder of documents scandal in town

President Joe Biden is spending his Friday in Philadelphia, where he'll be delivering remarks on the economy and speaking at a Democratic National Committee fundraiser. One of his old friends will be in the city as well.
PHILADELPHIA, PA・1 DAY AGO
WashingtonExaminer

Bill Clinton returns to hail 30 years of FMLA, yet almost half of workers aren't eligible

Former President Bill Clinton was back at the White House this week to celebrate the 30th anniversary of a federal policy that allows U.S. workers to take up to 12 weeks of time off for an illness or new baby without losing their job.
1 DAY AGO
WashingtonExaminer

Sen. Roger Wicker (R-MS), the ranking member of the Senate Armed Services Committee, slammed the Biden administration for its handling of the Chinese spy balloon on Saturday, which was successfully shot down Saturday afternoon.
MONTANA STATE・12 HOURS AGO
WashingtonExaminer

Last year, President Joe Biden blistered his predecessor for mishandling classified files. Now, finding himself entangled in a similar quagmire, Biden has repeatedly downplayed questions about his own handling of the nation’s secrets.
REHOBOTH BEACH, DE・23 HOURS AGO
WashingtonExaminer

The Social Security Administration's first round of retirement payments for the month of February, worth up to $4,194, will begin being issued to recipients starting next week.
2 DAYS AGO
WashingtonExaminer

Canada is tracking what it described as a "potential second incident" of a Chinese surveillance balloon moving over the country.
MONTANA STATE・1 DAY AGO
WashingtonExaminer

Six Republicans most likely to challenge Trump in 2024

A crowded GOP primary seems increasingly possible in 2024, as more Republicans are expected to emerge to face former President Donald Trump for the party's nomination next year.
IOWA STATE・20 HOURS AGO
WashingtonExaminer

It’s been just over a month since Republicans took control of the House and have begun to usher in a new era of rules and legislative priorities.
18 HOURS AGO
WashingtonExaminer

State of the Union 2023: Rep. Delia Ramirez to deliver progressive response to Biden

Rep. Delia Ramirez (D-IL) is poised to deliver the progressive response to the State of the Union.
ARKANSAS STATE・1 DAY AGO
WashingtonExaminer

House Oversight Committee Chairman James Comer (R-KY) raised dire alarms over the Chinese surveillance balloon traveling across the country and floated the notion that it may carry something nefarious such as a bioweapon.
MONTANA STATE・1 DAY AGO
WashingtonExaminer

Several Texans are dead and nearly 400,000 people in the state are without power as ice storms are expected to ease up in the South on Thursday.
TEXAS STATE・3 DAYS AGO