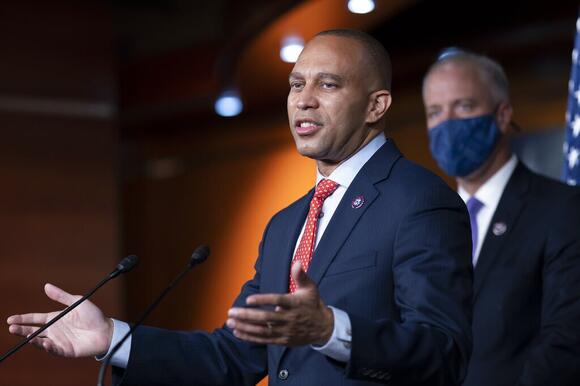 R ep. Hakeem Jeffries (D-NY) made history on Wednesday as the first black lawmaker elected to lead a party in Congress , with his Democratic colleagues lauding him as a unifier within the caucus as the party ushers in a new generation of leadership.

Jeffries steadily climbed the leadership ranks since coming to Congress in 2013, with Democratic sources telling the Washington Examiner that despite the New York Democrat not being one to seek out attention, his work on the House Judiciary Committee and role as an impeachment manager stood out.

“Hakeem is a bridge builder. He has always believed in reaching out to members from across the spectrum to unite the party. He is smart on policy and also gets politics and communications. He is incredibly disciplined and even — a rare, dynamic package,” Rep. Josh Gottheimer (D-NJ) told the Washington Examiner .

After graduating from the State University of New York at Binghamton in 1992, the Brooklyn native went on to get his master's degree in public policy from Georgetown University in 1994 before earning his law degree from New York University in 1997. Prior to entering the political realm, Jeffries worked for the high-profile New York law firm Paul, Weiss, Rifkind, Wharton, & Garrison and later as an in-house counsel for Viacom and CBS.

Jeffries launched an unsuccessful bid for the New York State Assembly, challenging state Democratic Assemblyman Roger Green in 2000 and again in 2002, but eventually won the seat in 2006, making an impact on policy related to criminal justice reform, an area he has continued to place a strong focus on in the House.

Jeffries served in the legislature until 2012, opting to run for his Brooklyn-based congressional district. He replaced former Rep. Edolphus Towns (D-NY), who opted to retire due to the likelihood of Jeffries ousting him in a primary.

Garnering strong relationships with members of the caucus, Jeffries was tapped by his colleagues to serve as co-chairman of the House Democratic Policy and Communications Committee in 2017 before being elected to serve as House Democratic Caucus chairman, a position he has held since 2019.

Former Jeffries communications director Michael Hardaway said he believes his former boss’s hands-on approach to addressing constituents’ needs and his even-keeled demeanor will help him lead the caucus and bring the different factions together next year, with parties expected to have to work together on major issues due to the razor-thin margins in the lower chamber.

“He's always viewed his job as work comes first. And everything else comes second. Everything else could be, you know, meetings with celebrities that may come into town or want to meet him. Everything else could be the White House Correspondents' dinner and the parties that every single year he gets invited to, and I could never convince him to go because going to those things means that he has to forgo a senior center visit or a local community event," Hardaway said.

“I think [that] represents who he is, which is someone who is focused on the work and representing the people that he represents versus the glory and the fame that comes from having that job. That's never been something he's interested in,” he added.

Hardaway said he believes Jeffries's approach is different than the majority of lawmakers, arguing that while he puts a strong focus on a broad range of policy areas, he makes the time to interact with residents in his district and assist with the hyperlocal issues they face.

“Throughout his entire career, he has hosted this thing called 'Congress on your Corner,' which is for several months a year. He picks a random corner in Brooklyn and sets up a table, and he spends the next three to four hours meeting with anyone who walks by and wants to talk to him,” Hardaway said.

“I remember one day, we’re out there in the middle of summer, and an elderly lady came up. She had to be about 77 or 78 — and she said to him, 'I need your help. My landlord has been trying to push me out of my apartment. He has not turned the air conditioner on at all this summer, and I think he's trying to push me out by completely neglecting the repairs on my apartment.’ Most politicians in that situation would pretend to kind of be interested, but that's not how Hakeem operates," he added. "Hakeem pulled out his personal cellphone, gave her his phone number, exchanged information, and personally took care of the situation. I think that speaks to who he is.”

Rep. Andre Carson (R-IN), a member of the Congressional Black Caucus and a close friend of Jeffries, said that members of the caucus see Jeffries as a “brilliant lawyer” and appreciate his unique ability to communicate his message in a way that resonates with a younger and more diverse generation of Democrats. Carson said he and Jeffries were able to bond over their mutual love of hip-hop music and pointed to the New York Democrat using famous rap lyrics when trying to drive home a point on different issues, with the soon-to-be minority leader even managing to slip in a Notorious B.I.G. reference while laying out his case against former President Donald Trump during impeachment proceedings.

“He and I are both avid readers, and we're both fans of stoicism and philosophy. And we talk in philosophical terms and hip-hop terms — famous hip-hop lines, that's how he and I often communicate with one another," he said. "But these aren't just simple lines. These are like lines from complex MCs like Nas, Biggie — we even talk Tupac and the Wu-Tang Clan. When we communicate, we communicate in ways that avid hip-hop lovers or backpackers would appreciate, using metaphors and similes from famous artists.”

Carson added that while he sees House Speaker Nancy Pelosi (D-CA) as one of the most effective leaders in recent history, he believes Jeffries will be able to be equally as effective despite likely taking a different approach to the position.

Jeffries, 52, is expected to govern to the left of Pelosi in the new Congress.

“He’s a pragmatic progressive who works across the aisle to get stuff done," one source close to Jeffries said. "He’s also got one of the most progressive voting records in Congress."

While Pelosi made history as the first female speaker, multiple lawmakers and operatives noted the significance of Jeffries becoming the first person of color to obtain the top party position in either chamber.

Darren Peters, who served as an adviser to ex-Secretary of State and former first lady Hillary Clinton and is a member of the Congressional Black Caucus Institute's 21st Century Council Executive Committee, noted the significance of a CBC member obtaining the role and the increase in influence the group has had in recent years.

“Never in my wildest dreams was imagining that, you know, we could, that we would someday while I'm here, you know, have an African American leader, not to mention potential speaker of the House of Representatives," he said. "I mean, it's a monumental feat, and the fact that he is, you know, as young as he is — I mean, it's got to be extremely inspirational, not just for African Americans, but to a number of groups who aspire to higher heights."

“I think it's extremely significant that not only do we have Hakeem in this role as Democratic Party leader, but coming from the Congressional Black Caucus, you've had a president of the United States, you've got the vice president of the United States. Now, you have the leader and potential speaker. You now have a member of the CBC who's recently left and is about to become mayor of one of the most populated cities in this country, not to mention Marcia Fudge as a Cabinet secretary," he added. "The CBC has got to be looking at their membership and what they've done and given themselves a pat on the back. Well, you know, their work is clearly not finished. I mean, this is something that I think they should be extremely proud of.”

Former President Donald Trump is not receiving endorsements or gaining traction for his 2024 presidential run among leaders in the crucial swing state of Iowa.
IOWA STATE・3 DAYS AGO
WashingtonExaminer

Rep. Adam Schiff (D-CA) is facing an early obstacle to his 2024 Senate bid after a nonprofit ethics organization filed a complaint to the Office of Congressional Ethics accusing the California Democrat of using government resources to boost himself politically.
CALIFORNIA STATE・3 DAYS AGO
Eden Reports

This help line is a growing effort to give Ukraine vital advice on repairs and maintenance as it pushes weapons to their limits.
WASHINGTON STATE・9 HOURS AGO
WashingtonExaminer

Social Security update: First payments for February worth up to $4,194 arriving in 11 days

In less than two weeks, select recipients of Social Security retirement money will receive a payment of up to $4,194.
2 DAYS AGO
WashingtonExaminer

Former House Speaker Nancy Pelosi (D-CA) responded to the release of police body camera footage of the attack on her husband Paul Pelosi by saying she has no plans to view it.
SAN FRANCISCO, CA・3 DAYS AGO
WashingtonExaminer

The Republican Party is reportedly looking to implement a requirement for presidential candidates to participate in debates, which was first used by Democratic Party in 2020.
WASHINGTON STATE・3 DAYS AGO
WashingtonExaminer

The first West Point graduate to represent the academy in Congress has a slate of issues he wants to tackle but is starting off with a warning to Republicans: Stop criticizing the military.
WASHINGTON STATE・3 DAYS AGO
WashingtonExaminer

San Francisco police have released body camera footage of the moment Paul Pelosi was attacked in his home by an assailant with a hammer last October.
WASHINGTON, CA・3 DAYS AGO
Eden Reports

In a recent speech, President Joe Biden stated that he had added more to the national debt of the United States than any other president in history, saying, "No President added more to the debt in 4 years than my President… I misspoke - 25% of our country’s entire debt."
1 DAY AGO
WashingtonExaminer

In a Saturday rally in Harlem, Rev. Al Sharpton addressed the latest body camera footage release of the deadly Memphis police beating of Tyre Nichols and pledged to continue to take on any police brutality against African Americans no matter the race of the police officers.
MEMPHIS, TN・2 DAYS AGO