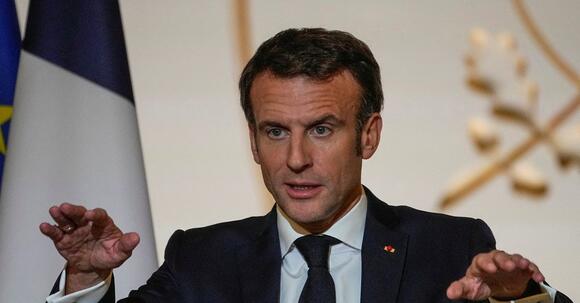 While EU countries welcome the new commitment to energy transition, they fear the $430 billion Inflation Reduction Act will put their companies at an unfair disadvantage.

WHY IS EUROPE ANGRY?

EU countries are worried their companies will suffer because of U.S. tax breaks for components used in renewable energy technologies like electric cars on condition they are made in North America.

French Finance Minister Bruno Le Maire says that while subsidies to foster energy transition are fair game, they should comply with WTO rules and there should be a level playing field.

Not only do the tax breaks put European companies at a disadvantage to U.S. rivals, but EU state aid rules prevent EU countries from offering as generous tax breaks to companies looking to set up factories as they can get in the United States.

The EU is not Washington's only ally up in arms about the package, with South Korea also concerned its carmakers will not be eligible for the U.S. tax breaks.

WHAT DOES EUROPE WANT?

Since any major revision by the U.S. Congress is out of the picture, European officials say their best hope is to secure exemptions along the lines of what Canada and Mexico already have.

While the European Commission and the White House have set up a high-level task force for talks, Macron aims to use his political clout to push the case for exemptions at the highest level during his state visit.

EU governments want a solution quickly, possibly with an arrangement agreed at an EU-U.S. Trade and Technology Council meeting on Dec. 5.

Even though no one wants to rekindle trade tensions that damaged transatlantic relations during the Trump administration, European officials say that bringing the issue before the WTO remains an option if talks go nowhere.

However, a riposte from Europe would likely face resistance from more traditionally free trade friendly nations such as the Netherlands and Sweden.

CAN EUROPE ALSO SUPPORT ITS COMPANIES?

France has led calls for Europe to respond with state support of its own for European companies, including through a "buy European act" and large-scale subsidies.

While not as vocal about the possibility for a massive subsidy programme, Germany has shown interest in supporting European industry although its coalition-led government is far from united about how to do so.

Vice-Chancellor Robert Habeck, a green politician who met Macron last week, has gone so far as to say the EU could set targets for domestically produced products.

Meanwhile, some German officials point out that 200 billion euros in EU pandemic recovery funds remain available and could be repurposed to support industry.

European governments can also pool resources to subsidise cross-border projects deemed to be in the broader EU interest, but getting such initiatives approved by the European Commission can often prove long and complicated.

With a number of big projects in the pipeline, Le Maire and Habeck last week called on the Commission to streamline and speed up the approval process.

BEIJING, Jan 31 (Reuters) - China is seriously concerned about a report that the United States has stopped approving licences for U.S. companies to export items to tech giant Huawei, a foreign ministry spokesperson said on Tuesday.
2 DAYS AGO
Reuters

WASHINGTON, Jan 31 (Reuters) - The White House is launching a partnership with India on Tuesday that President Joe Biden hopes will help the countries compete against China on military equipment, semiconductors and artificial intelligence.
WASHINGTON STATE・1 DAY AGO
Reuters

Factbox: How long will it take Ukraine to join EU?

(Reuters) - More than a dozen top European Union officials arrive in Kyiv on Thursday, a top-level demonstration of support following new pledges of military aid as the first anniversary of Russia’s invasion of Ukraine nears.
GEORGIA STATE・7 HOURS AGO
Reuters

AMSTERDAM, Jan 30 (Reuters) - France and the Netherlands are aligned when it comes to the ways the European Union could deal with the "unintended consequences" of the U.S. Inflation Reduction Act, Dutch Prime Minister Mark Rutte said on Monday after a meeting with French President Emmanuel Macron.
2 DAYS AGO
Newsweek

"There is no other way to talk to these fools," State Duma member and former military commander Andrey Gurulyov said.
2 DAYS AGO
Reuters

KYIV, Jan 31 (Reuters) - Ukraine will receive 120 to 140 Western tanks in a "first wave" of deliveries from a coalition of 12 countries, Foreign Minister Dmytro Kuleba said on Tuesday.
1 DAY AGO
Insider

"The girls from Ukraine and Switzerland simply ran from me like fire," Anna Linnikova told Evening Moscow.
LOUISIANA STATE・1 DAY AGO
Reuters

Crimea will never again be part of Ukraine - Croatian president

The video sparked discussions on social media about what kind of weapon could be responsible for the attack.
1 DAY AGO
Fox News

Social media is ablaze after news that Hellmann’s Mayonnaise is being withdrawn from South African grocery shop shelves, according to some analysts, because of the war in Ukraine.
22 HOURS AGO
Newsweek

The U.S. government has warned that the war in Ukraine has "raised geopolitical tensions in the Arctic"
MICHIGAN STATE・19 HOURS AGO
Reuters

Feb 1 (Reuters) - President Vladimir Putin said on Wednesday that Russia's military must stop the shelling of Russian regions from Ukrainian territory, which he said had left many people homeless or without power.
20 HOURS AGO
Reuters

WASHINGTON/KYIV, Feb 2 (Reuters) - With the United States expected to send a new longer-range weapon to Ukraine, it has answered President Volodymyr Zelenskiy's plea for rockets that can strike deep behind the front lines of the nearly year-long conflict with Russia.
3 HOURS AGO
Reuters

Feb 1 (Reuters) - The situation on the front lines in eastern Ukraine has become tougher as Russian forces step up an offensive, President Volodymyr Zelenskiy said on Wednesday in another gloomy military assessment from Kyiv.
14 HOURS AGO
Reuters

SHANGHAI, Jan 31 (Reuters) - China's semiconductor industry has become a key target of the United States, which has imposed a slew of export restrictions targeting several parts of the country's chip sector supply chain as it bids to slow its rival's technological advancement.
WASHINGTON STATE・2 DAYS AGO
Reuters

MOSCOW, Jan 31 (Reuters) - Russia said on Tuesday that calls by the president of Lithuania to supply Ukraine with fighter planes highlighted the "extremely aggressive position" of the Baltic states and Poland, and that "major European countries" should counterbalance their stance.
2 DAYS AGO
Reuters

MOSCOW, Feb 2 (Reuters) - Russian Foreign Minister Sergei Lavrov said on Thursday that Russian forces would respond to the delivery of longer-range Western weapons to Kyiv by trying to push Ukrainian forces further away from its borders to create a safe buffer zone.
GEORGIA STATE・3 HOURS AGO
Reuters

SARARO, Iraq, Jan 31 (Reuters) - Looming over the deserted village of Sararo in northern Iraq, three Turkish military outposts break the skyline, part of an incursion that forced the residents to flee last year after days of shelling.
2 DAYS AGO
Reuters

Jan 31 (Reuters) - Israeli Prime Minister Benjamin Netanyahu said on Tuesday he would be willing to consider serving as a mediator between Russia and Ukraine if asked by both warring countries and the United States.
WASHINGTON STATE・1 DAY AGO