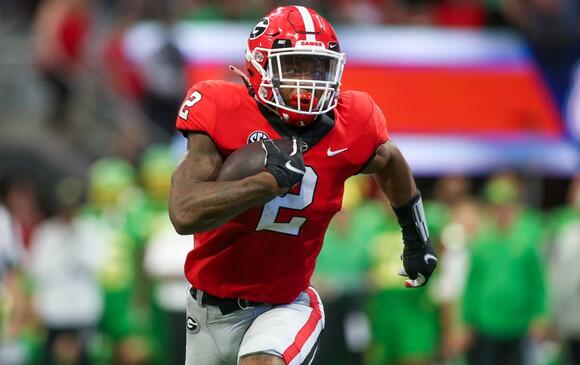 With just one week left on the schedule before the bowls kick of, the college football season is poised to finally sort out the major conference and playoff races with Championship Week on the horizon.

What can we expect from the Week 14 slate of games? This week, we turn to FPI to guide us in making our own picks for the biggest matchups.

Place your bets: College football picks, predictions against the spread

Devised by ESPN analysts, its rankings and scores predictions are based on 20,000 simulations of a team’s season, using a combination of analytics, including scores to date, quality of opponents, and a team’s schedule.

Percentages courtesy of FPI and game lines from SI Sportsbook

Maybe no team in America is under as much pressure as USC heading into the Pac-12 Championship Game. Win, and it's in the College Football Playoff. Lose, and it's out. Now comes a rematch with the team that handed the Trojans their one loss, by one point, midseason. Utah won that game by controlling the ball on fourth down and attacking the intermediate portion of the field with tempo, USC's weakness defensively. But Caleb Williams and this offense have found a rhythm late in the season that can compensate for any defensive slip-ups.

Post-game: How'd we do? Not so great thanks to Caleb Williams playing on what Lincoln Riley called a "popped hamstring" and USC's defense once again failing to play up to its challenge, as Utah won 47-24 in the upset, bouncing the Trojans out of playoff contention.

The last time these teams met, UCF stacked up 336 yards on the ground in a win over the Green Wave. But that was with quarterback John Rhys Plumlee leading the way, and there are questions about his availability as he deals with a hamstring injury. It's hard to beat the same team twice, on the road, and now with a New Year's bowl on the line.

The Wildcats are going to run the ball effectively all day behind a ground attack that posts over 210 yards per game, but that loses some of its punch without quarterback Adrian Martinez fully healthy. TCU just has more variety and speed at the skill positions both running the ball and on the perimeter. This line has moved from 2.5 down to 1.5 in TCU's favor ahead of kickoff.

Carolina has been playing marginally better defense in recent weeks and quarterback Drake Maye should struggle a little against a solid Clemson front seven that will pressure him, but the Tigers' offense has been extremely unreliable the second half of the season. DJ Uiagalelei has not played up to expectations, he just lost top-scoring receiver Beaux Collins to an injury, and you can't expect Will Shipley to do everything. Even so, UNC's loss to Georgia Tech is enough to not pick the outright upset.

Purdue takes care of the football thanks to the deft play of quarterback Aidan O'Connell, in tandem with solid targets in Charlie Jones and Payne Durham, who combined have 20 touchdown catches on the year. Michigan may have left its best plays on the field at Ohio State and, while it's still clearly the better team overall, won't play too fancy and just wants to get out of Indy with a win and no one else any more banged up than they already are.

Georgia is the better football team in every phase, but that's still a big point spread for a conference championship game, much less the SEC. Georgia likes to build early leads and let its defense, which leads college football with 11.3 points allowed per game, to do the rest. Watch how LSU quarterback Jayden Daniels, the team's leading rusher, is able to extend plays against the Bulldogs' pursuit group at the line. Georgia can keep LSU under 20 points, but this offense tends to lose interest after halftime, too.

Georgia athletic department officials say the car involved in the crash that killed a football player and staff member was supposed to be used for recruiting purposes, not personal use. UGA said that personal use of the vehicle was prohibited. Georgia responds: "The car driven in the accident ...
ATHENS, GA・9 HOURS AGO
College Football HQ

Former Georgia football star Stetson Bennett was arrested in Dallas over the weekend on a public intoxication charge, as first reported by WFAA. Now, a new video has surfaced of Bennett being released from the detention center in Dallas where he was held by police. You can see the video of his ...
ATHENS, GA・11 HOURS AGO
College Football HQ

Alabama has signed another top-flight recruiting class, the No. 1 group in the nation in 2023 according to our College Football HQ rankings and many others, but as ever, the question of NIL and its massive influence over the process continues to influence how things are done. Even so, Crimson ...
TUSCALOOSA, AL・5 HOURS AGO
College Football HQ

The Chiefs-Bengals rivalry had already reached a boiling point, but the AFC championship game this year might have blown the lid off. After spending a week fielding questions about the health of his ankle and the background noise centered around "Burrowhead Stadium" in reference to the Bengals' Joe Burrow, Patrick Mahomes let his play on the field do the talking. For those looking to find motivation, it seemed as if anointment of the Bengals as the AFC's next big thing led Mahomes to take aim at Cincinnati during his postgame interview with Tracy Wolfson after the game.
CINCINNATI, OH・20 HOURS AGO
College Football HQ

HBCU program Albany State football coach Quinn Gray has pulled his former offer for quarterback Marcus Stokes and offered a public apology. Stokes was originally a pledge to Florida until a video of him singing song lyrics that contained the N-word went public. Florida pulled its offer at the time ...
ALBANY, GA・10 HOURS AGO