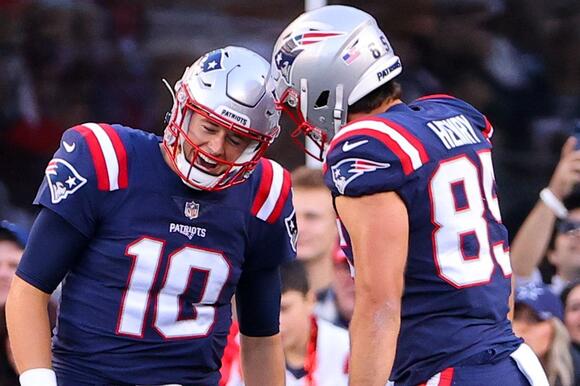 Jones ability to tackle adversity has impressed his several of his Patriots teammates, including two of his most prominent pass-catchers.

FOXBORO — As the old saying goes: “Success and failure are two sides of the same coin.”

Such is life for New England Patriots quarterback Mac Jones.

As the Patriots prepare to host the Buffalo Bills for a pivotal divisional matchup at Gillette Stadium on Thursday night, Jones will be in the spotlight … not just for his performance on the field, but also for the example he is setting for his teammates by playing through adversity.

“He’s doing a great job, man,” tight end Hunter Henry told reporters on Monday. “This year has been tough at times. Just going through an injury and battling his way back. It’s fun to see him have success and just the leader he is. We just continue to ride him throughout this whole year. He’s a stud. I’m glad he’s my quarterback. Glad he’s our quarterback. Excited to go out there and compete every single week with him.”

Despite entering the season on the heels of an impressive rookie campaign, Jones has struggled to rekindle his previous success in 2022. The 24-year-old has completed 162 passes for 1,768 yards, with six touchdowns and seven interceptions. Though missing three games due to a high-ankle sprain has undoubtedly contributed to his regression, it is clear that the Alabama product has looked uncomfortable and even confused in New England’s ‘new-look’ offense.

In contrast, Jones was largely the talk of the town just one year ago.

In just his first season as the Pats’ starter, Jones led all rookies with a 67.6 completion percentage and a 92.5 passer rating, while compiling 3,801 yards and 22 touchdowns. He completed at least 70 percent of his attempts in nine games and twice threw for 300-plus yards through the air. Jones was the centerpiece of a rookie class, which was chosen as the best in the NFL this past year by Pro Football Focus (PFF). His PFF grade ranked 12th among quarterbacks. The Alabama product was also selected to the PFWA's All-Rookie team.

Jones entered his preparations for 2022 intent on avoiding the dreaded ‘one-hit-wonder’ moniker. He adapted a stricter offseason workout regimen and healthier diet heading into his second season with the Pats. As a result, he looked leaner and impressed his teammates with his work ethic and leadership skills. Accordingly, Jones also took the proper steps not only to increase his velocity, but also to build upon his accuracy in various spots on the field. Those preparations involved collaborating with noted throwing guru Tom House.

However, the results have been mixed. Jones has had significant trouble when under pressure. Through eight games played, Jones has been sacked 21 times. His decision-making has been suspect, leading to notable criticism from fans and media alike. To make matters more difficult, rookie Bailey Zappe appeared to inject life back into the Patriots offense during Jones’ injury-related absence. Zappe’s control, poise and aesthetically-pleasing scoring strikes had fans clamoring for him to supplant Jones’ as the starting quarterback. In fact, Jones was booed off his home field in his Week 7 return against the Chicago Bears.

Never one to make excuses or hang his head, Jones persevered. Since the Pats’ 33-14 loss to the Bears, Jones has shown gradual improvement. Albeit in a 33-26 losing effort against the Minnesota Vikings on Thanksgiving night, Jones had his best performance of the season. He looked more decisive, confident and aggressive; completing 28 of 39 passes for 382 yards and two touchdowns.

While his stat line has been more impressive as of late, it has been Jones’ determination that continues to make him beloved among his teammates. Echoing Henry’s previous sentiments, wide receiver Jakobi Meyers praised his quarterback’s ability to remain steady and focused, despite the rocky road he has traveled.

“I wouldn't necessarily say it’s changed,” Meyers said on Tuesday of Jones’ demeanor as it relates to his rookie year. “But, the fact that it wasn’t as easy for him this year. I feel like he had a rough patch and people looked down on him for a second. But he stayed the same guy the whole way through it in the locker room. Wow! … I still respected him. So just seeing the resiliency in him … the respect for him has grown.”

Jones’ leadership abilities may be attributed, in part, to the example he sets with his teammates. With a fearsome Buffalo Bills defense standing between his team and continued playoff contention , he will need to set the example by always remaining in the fight.

As he did at Alabama, he demonstrates a strong command of the playbook, but is also not afraid to mix it up, or even take a hit. In the early stages of the season, Jones often found himself being hurried, pressured and hit at an alarming rate. Still, the rookie showed tremendous resolve, as well as physical resilience. Though he may have taken a hard hit, Jones would immediately get back up to lead his team, even with the occasional spot of blood on his jersey.

Physical toughness of that type is inherently inspirational.

Yet, his emotional maturity and mental persistence is what makes Jones a quarterback which his teammates are proud to follow … and follow him they will into their most important game of the season.

The Patriots and Bills are set for an 8:15 p.m. ET kickoff from Gillette Stadium.

It’s the sound of hearts breaking across Philadelphia and the state of Pennsylvania… and let’s be honest, everywhere else in the country, too. Eagles quarterback Jalen Hurts made a very rare public appearance with his girlfriend Bryonna “Bry” Burrows after the NFC Championship game this past Sunday, which is a surprise to many fans, as he is extremely private about his life outside of football.
PHILADELPHIA, PA・1 DAY AGO
E! News

Watch: Tom Brady Announces His Retirement From Football "For Good" Tom Brady is putting down his helmet, for good this time. The NFL quarterback, who previously announced his retirement in 2022 before returning to the sport for one more season with the Tampa Bay Buccaneers, shared an update with fans on Feb. 1. "Good morning, guys, I'll get to the point right away," Tom said in a video message, posted to Twitter and Instagram. "I'm retiring, for good. I know the process was a pretty big deal last time, so when I woke up this morning I figured I'd just press record and let you guys know first."
8 HOURS AGO
The Spun

Christian McCaffrey won't get the chance to play in the Super Bowl, but at least he has some new plans for February. The NFL named the San Francisco 49ers running back to the Pro Bowl. He'll replace Miles Sanders, who will instead participate in the Super Bowl. While McCaffrey would undoubtedly ...
SAN FRANCISCO, CA・1 DAY AGO
Patriot Country

Patriots Country highlights a six-pack of players on whom Pats fans might want to keep watch at this year’s Reese’s Senior Bowl in Mobile, Alabama.
MOBILE, AL・5 HOURS AGO
Patriot Country

New England Patriots boss Bill Belichick had an extended conversation with a familiar face during his team's final practice ahead of the East-West Shrine Bowl.
LAS VEGAS, NV・9 HOURS AGO
Patriot Country

The Patriots are expected to be among the NFL's best-situated teams when it comes to financial flexibility and draft capital.
23 HOURS AGO