Mike Braun to run for Indiana governor in 2024 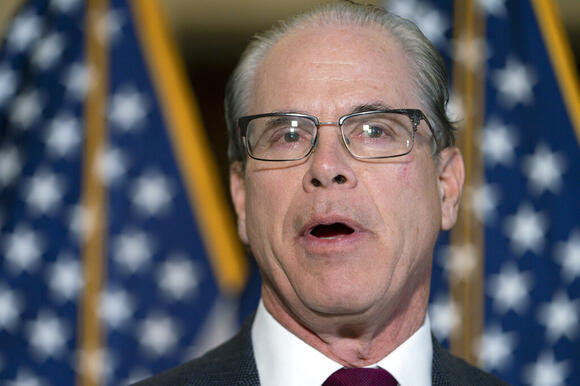 The U.S. senator filed paperwork Wednesday morning signaling his intent to run for Indiana governor. The move would open up a Senate seat in 2024. Politico first reported about the filing.

“Mike Braun has filed his paperwork to run for governor and will be making an official announcement of his candidacy very soon,” said Josh Kelley, Braun’s chief of staff and senior political advisor, in a statement.

A Jasper native and graduate of Jasper High School, Braun rose to prominence as a businessman. He entered the political arena on the state level as a representative for Indiana District 63 from 2014 to 2017.

He then focused on the 2018 race for the Senate, defeating Todd Rokita and Luke Messer in the primary before going on to beat Donnelly.

The Indiana Democratic Party responded with a statement:

As a so-called businessman, Mike Braun has done very little to improve Indiana as a U.S. senator and he surely won’t do it as governor. Braun’s half-hearted efforts have been ineffective, and he’s been more likely to be spotted on national cable TV shows than talking to Hoosiers in real life about solving real problems.

What’s worse, Braun supports a form of extremism that was soundly rejected in the U.S. Senate just last night through The Respect for Marriage Act and his stances on social issues are out of step with the majority of Hoosiers. The Senator’s dangerous record – which also includes inciting an insurrection against our country – would be grounds to earn a pink slip in any other line of work.

A Mike Braun administration would do nothing to improve the state’s dismal quality-of-life, workforce, and education rankings, and coming up on 20 years of Republican state administrations, Hoosiers deserve honest leadership that will put an end to extremist politics and chart a course for a modern and better Indiana where everyone has the freedom to thrive.

INDIANAPOLIS – There’s much to discuss this week including the spy balloon shot down by the U.S. military, next week’s State of the Union address, and the looming fight over the debt ceiling. In the video above, our Washington bureau has the latest from the nation’s capital, plus an interview with transportation secretary Pete Buttigieg […]
INDIANA STATE・1 DAY AGO
FOX59

INDIANAPOLIS – Indiana is a step closer to allowing speed cameras in work zones. The proposal has been discussed for several years, but it’s the first time it ever got a vote in the full House, which passed the bill 70-28. Advocates say the measure would protect construction workers and drivers going through work zones. […]
INDIANA STATE・6 HOURS AGO
FOX59

This Indiana city is among the safest in America: report

When you’re thinking about moving to a new city, safety is probably one of the main factors you take into consideration. If Indiana is one of your top states to live in, you are in luck.
INDIANA STATE・1 DAY AGO
FOX59

Congresswoman Victoria Spartz not running for office in 2024

A Congresswoman representing central Indiana is taking a step back from national politics.
INDIANA STATE・3 DAYS AGO
FOX59

Powerball ticket worth $50,000 sold in Indiana

INDIANAPOLIS — A Hoosier had some luck in Saturday night’s $700 million Powerball drawing. One ticket sold at the Meijer at 6939 W. Broadway in McCordsville matched four out of five numbers plus the Powerball. That combination earns the ticket holder $50,000. The winning numbers are:  2-8-15-19-58 with the Powerball of 10. The Powerball jackpot grows […]
MCCORDSVILLE, IN・20 HOURS AGO
FOX59

INDIANAPOLIS – Hoosiers gathered at Monument Circle demanding change Saturday afternoon. “What do we want? Justice. When do we want it? Now,” chanted rally attendees. In the last two weeks, body camera footage was released of two black men dying after encounters with police: Tyre Nichols in Memphis and Herman Whitfield III in Indianapolis.  The […]
INDIANAPOLIS, IN・2 DAYS AGO
FOX59

HAMILTON COUNTY, Ind. – The husband of a missing Carmel woman is being extradited back to Indiana. The Hamilton County Sheriff’s Office confirmed that Xavier Breland would be returned to custody in Indiana, although law enforcement officials didn’t have a timeline or clarify the reason for his extradition. According to online court records, Hamilton County […]
CARMEL, IN・3 DAYS AGO
FOX59

Food sold at retail stores, vending machines and during travel is being recalled because it may get people sick.
CONNECTICUT STATE・11 HOURS AGO
FOX59

INDIANAPOLIS — Some AES customers have told FOX59 their bills are double, sometimes triple, what they’re used to paying. Shannon Latham is one of those people. She said she was shocked when she opened up her heating and power bill for January. “I called my husband instantly and was like, ‘I cannot believe this but […]
INDIANA STATE・4 DAYS AGO
FOX59

Can I be sued if snow from my car hits another car in Indiana?

In Indiana, drivers might wonder whether they can be sued if snow flying from their cars creates more hazardous driving conditions for others on the road.
INDIANA STATE・2 DAYS AGO
FOX59

Mild air moves in next week

INDIANAPOLIS – Gusty winds ushering in warm air out of the south will be in place over the next few days for Indiana. A warm south breeze Winds will be gusting over 30 mph at times over the next couple of days. However, this wind will be a hard push of warm air coming from […]
INDIANA STATE・2 DAYS AGO