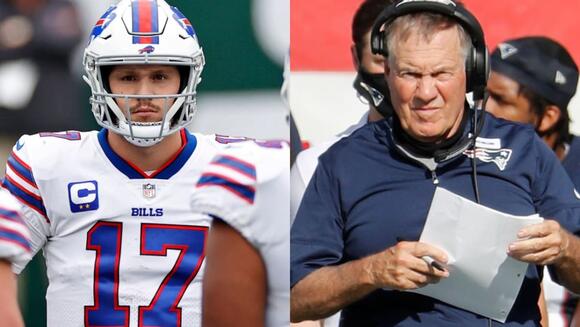 New England's defense is confronted with duel-threat quarterback Josh Allen, who has been a nightmare for the Patriots.

The New England Patriots host the reigning AFC East Division champion Buffalo Bills in primetime from Gillette Stadium. Both teams are again playing on Thursday after taking part in the exciting Thanksgiving slate of games, but experiencing different results. The Bills beat the Detroit Lions 28-25 in a thriller while mistakes overshadowed a strong Patriots offense in a 33-26 defeat to the Minnesota Vikings.

In the Week 12 loss, quarterback Mac Jones showed fight and gave New England's offense signs of life after only putting up a field goal against the New York Jets in Week 10. Jones completed 72 percent of his passes, completing 28 of 39 throws for two touchdowns and most importantly, zero interceptions.

Jones and the Patriots will be facing a Buffalo defense that will be without star Von Miller. After sustaining a knee injury in the second quarter of Buffalo’s W eek 12 win, Miller was diagnosed with a lateral meniscus tear and will miss the game vs. New England.

On the flip side, New England's defense is confronted with duel-threat quarterback Josh Allen , who has been a nightmare for the Patriots. In the last two matchups, Allen has totaled 622 passing yards, eight touchdowns and no interceptions, while adding 130 rushing yards.

The Patriots are hunting for a Wild-Card spot in the AFC. The loss on Thanksgiving caused the Patriots to fall down the conference standings, slipping from sixth place to eighth place. Currently, New England would be on the outside looking in as only the top seven teams in the conference make the postseason.

ODDS: New England is a 5.5-point underdog vs. the Bills.

“They’re explosive [in the passing game] on offense,” Belichick told reporters on Sunday. “Allen’s the leading rusher, so that tells you all you need to know about what you have to defend every time he touches the ball, it could be any number of things and does them all well. Great player, certainly an MVP candidate. He does a lot for their team in a lot of ways.”

The New England Patriots are currently set up well with two young quarterbacks, Mac Jones and Bailey Zappe, who both have winning records as starting quarterbacks during their short tenure in the league.
19 HOURS AGO
Patriot Country

Which prospects stood out in front of Bill Belichick and the rest of the New England Patriots coaching staff at the East-West Shrine Bowl?
TENNESSEE STATE・17 HOURS AGO
Patriot Country

Mac Jones had a better season than the Ravens' quarterback. For that matter, so did Bailey Zappe.
BALTIMORE, MD・19 HOURS AGO
Patriot Country

New England's Marcus Jones, Matthew Slater and Matthew Judon were voted by the NFL Players Association among the Top 5 at their position.
59 MINUTES AGO
Patriot Country

Houston recently wanted a second-round pick for Brandin Cooks - which the still-receiver-needy Dallas Cowboys at the time were pretty much willing to give. Would the New England Patriots want in to "win the deal''?
HOUSTON, TX・23 HOURS AGO
Patriot Country

Though Jerod Mayo may be headed for a pay raise in 2023, his positional label remains in question.
13 HOURS AGO
Patriot Country

Arian Foster might've fooled some NFL fans, but New England's Matthew Judon wasn't among them. No, they don't really think the league is "rigged.''
14 HOURS AGO
Patriot Country

The Patriots are expected to be among the NFL's best-situated teams when it comes to financial flexibility and draft capital.
2 DAYS AGO