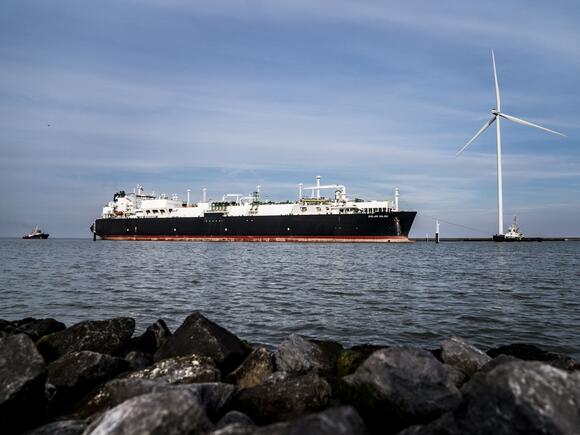 Europe's dependence on liquefied natural gas from Russia has skyrocketed this year while moving away from the country's coal and oil.

The European Union spent roughly $13 billion on Russian-sourced LNG from January of September 2022, according to a report from Bloomberg. That's five times as much as the EU spent on Russian LNG a year earlier, driven by rising demand from Belgium and France.

The surge in LNG imports this year shows the difficulty in punishing Russia for its invasion of Ukraine earlier this year by reducing Europe's use of the Kremlin's energy supplies.

While the EU is working on an oil embargo with more sanctions and has already banned imports of Russian coal, fully banning Russian energy is still a longshot.

Russia is now the second-largest supplier of LNG gas to Northwest Europe so far this year, trailing the US. So far, only the United Kingdom and Baltics have halted purchases of Russian LNG.

The EU said the bloc would replace two-thirds of gas sources from Russia this year in March, and would rely more heavily on LNG. While Russian gas has indeed declined to 10% of the EU's total flows, LNG from Moscow is still close to half of imports.

Many expected a Russian victory over Ukraine in "a matter of days or weeks," but not US National Guardsmen, Army Gen. Daniel Hokanson said this week.
1 DAY AGO
Markets Insider

The European Union's upcoming ban on Russian oil products could spell more turmoil for the Kremlin. China and India are unlikely to buy refined Russian fuels that were once sold to the EU, which will ban them on February 5. That's in contrast to Russian crude oil, which were snapped...
7 HOURS AGO
Markets Insider

Oil's bull story for 2023 is China's reopening, but that could be derailed if Beijing can't stay the course on its retreat from zero-COVID policy, RBC's Helima Croft says

Chinese people are traveling more, and oil imports are rising, and that trend is the "real bull story for oil this year," RBC's Croft told CNBC.
4 DAYS AGO
Markets Insider

Price caps on Russian fuels could range from $45 to $100 with EU diplomats set to begin negotiations, report says

The European Union is considering a price cap of $100 per barrel on Russian diesel, according to Bloomberg. Meanwhile, a price cap of $45 a barrel is being weighed for Russian fuel oil. The price caps would coincide the EU's upcoming ban on refined products from Russia that will take...
2 DAYS AGO
Newsweek

The Mil Mi-8 helicopter hit the ground at Vnukovo airport with its blades and tail, Russian media reported.
6 HOURS AGO
Newsweek

Vladimir Putin, who is believed to be about 5 feet 7 inches, was photographed with students of Lomonosov Moscow State University on Students' Day on Wednesday.
1 DAY AGO
Markets Insider

Nobel economist Paul Krugman says we're not in a debt crisis, but the US could still be facing a lot of economic problems in a few years

The US isn't in a debt crisis, but it'll soon be facing the problem of its $31 trillion debt, Paul Krugman said. The debt was taken on to prop up the economy in tough times, and was often needed to avoid a severe recession. But the economy could have "a...
3 DAYS AGO
Markets Insider

The worst is over for the US housing market – and prices will stop crashing within 6 months, Goldman Sachs says

A painful period for the US housing market looks like it's coming to an end, according to Goldman Sachs. The bank predicted that prices will fall just 6% from their peak and bottom out halfway through 2023. But there are likely to be steeper declines in west coast cities like...
3 DAYS AGO
Markets Insider

Coinbase was hit with a $3.6 million fine by the Dutch central bank for failure to properly register in the country

Coinbase is being fined $3.6 million for failing to register its crypto services to customers in the Netherlands, the Dutch central bank (DNB) said on Thursday. DNB says that the company should have obtained the correct registration under the Dutch Anti-Money Laundering and Anti-Terrorist Financing Act before operating in the country.
2 DAYS AGO
Markets Insider

The stock market will soon reach a tipping point in active versus passive investing, ISS says

The stock market is on the cusp of reaching a key tipping point soon in the balance between active and passive investing. The share of long-term invested US assets held by active funds will slip below 50% in a few years after accounting for 53% in 2022, ISS said. By...
3 DAYS AGO
Markets Insider

US inflation has steadily cooled since mid-2022, thanks to large interest-rate increases by the Federal Reserve. However, a four-month drop in the dollar is threatening to derail that trend by raising the cost of imported goods. The dollar index has fallen by more than 11% from a peak reached in...
9 HOURS AGO
Markets Insider

Tesla CEO Elon Musk warned of a recession in the company's fourth-quarter earnings update. But investors shouldn't fret about his outlook, according to The Future Fund co-founder Gary Black. Any economic downturn will be shallow because the Federal Reserve can cut interest rates whenever it wants, Black said Thursday. Elon...
1 DAY AGO
Markets Insider

Big Tech is in focus with quarterly results coming in after that group of stocks was slammed last year.
3 DAYS AGO
Markets Insider

A unit of Genesis Global says a trader known as "Bitcoin Jesus" has yet to settle all his crypto options trades. GGC International's claim was part of a January 23 filing in New York State Supreme Court. Genesis filed for bankruptcy this month after being impacted by the bankruptcies of...
3 DAYS AGO
Markets Insider

US stocks opened mixed on Friday, as the Federal Reserve's preferred inflation gauge showed more cooling. The personal consumption expenditures index was up 5% year over year in December. The core PCE, which excludes volatile food and energy prices, increased by 4.4%, down from November's annual pace of 4.7% and in line with forecasts.
1 DAY AGO
Markets Insider

Vanguard's global investment expert explains what traders are doing to kick off 2023 and how markets are reacting to the Federal Reserve's policy tightening.

El Salvador paid an $800 million bond with interest, President Nayib Bukele tweeted on Monday. A portion had earlier been bought back, putting the amount that matured on Tuesday at about $600 million. The government got a big boost in its ability to pay after receiving a $450 million loan...
3 DAYS AGO