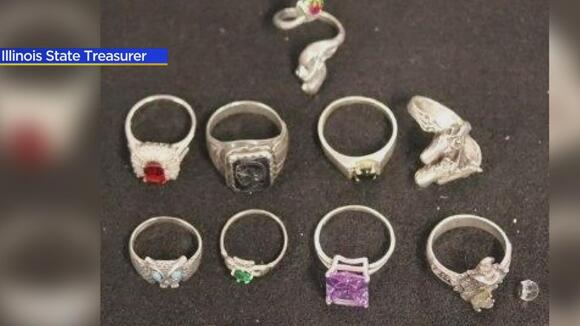 CHICAGO (CBS) -- The Illinois Treasury Department is ramping up for the 2022 holiday auction of unclaimed property.

It includes things like jewelry, collectible coins, and historic souvenirs.

More than 450 items will be up for auction online from next Monday to Friday.

Officials say most haven't been touched by the owners in more than ten years.

Illinois Gaming Board to vote on license for temporary Bally's Casino

CHICAGO (CBS) -- The Illinois gaming board meets in Chicago Wednesday to vote on a license for a temporary Bally's Casino in the city.It's the first step toward a new, permanent casino in the River West neighborhood.The make-shift location would be at the Medinah Temple on Ohio Street in River North. Back in September, we reported on a traffic study that found the area will be able to handle the increase in traffic caused by the temporary gaming operations. A newly constructed Bally's Casino is set to open in River West sometime in 2026.
CHICAGO, IL・6 HOURS AGO
CBS Chicago

CHICAGO (CBS) -- Some Illinois residents need a form from the state to file their taxes and for the third year in a row – and there are huge problems accessing it.CBS 2's Tara Molina brought those problems straight to the Illinois Department of Employment Security on Monday.The tax form in question is something those who have filed for unemployment need this time of year. It's called a 1099-G form, and for the third year in a row, people are reaching out to us since they're having issues getting it from the state. So we are asking - why is...
ILLINOIS STATE・1 DAY AGO
CBS Chicago

CHICAGO (CBS) -- Lawmakers in Springfield are hoping a proposed child tax credit can help working families.Under legislation recently introduced to the Illinois General Assembly, low- and middle-income families would receive a $700 income tax credit for each child under age 17.Joint filers earning less than $75,000 and single filers earning less than $50,000 would be eligible."Working parents are struggling worse than ever before. It is time for the state to create a permanent Child Tax Credit that puts money back into the pockets of parents in Illinois, so that parents can take care of their children and communities can begin to recover," said Illinois State Sen. Mike Simmons (D-Chicago), one of the sponsors of the proposed tax credit.No hearings have yet been scheduled for the proposed legislation.
ILLINOIS STATE・22 HOURS AGO
CBS Chicago

A St. John, Indiana police officer charged with shooting at an off-duty Hammond police officer has resigned from the force.Officer Phillip J. Fabian, who is facing a felony charge of criminal recklessness and a misdemeanor charge of criminal mischief, resigned from the St. John Police Department before a Monday special meeting of the Board of Safety of the Town of St. John to consider a recommendation from the police chief in reference to Fabian, according to St. John Police.Meantime, Fabian is due in court next week for an initial hearing on his charges.In November, we heard different versions of the same story...
HAMMOND, IN・1 DAY AGO
CBS Chicago

CHICAGO (CBS) -- Despite the dismal 3-14 Chicago Bears season, we saw some truly dazzling moments from Justin Fields.Bears fans in Chicago aren't the only ones taking notice.Sports apparel store Lids is out with its top-selling jerseys by state and there are some surprises.The Bear's Justin Fields has the highest-selling jersey in Illinois.We probably should expect that, but Fields' #1 jersey is also doing big numbers in Indiana and Wisconsin. It seems Bear nation is infiltrating Packer territory.Although Fields is outselling everyone else in those three states, he didn't crack the top 10 in the country.Dak Prescott, Patrick Mahomes, and George Kittle hold the top three selling spots.
CHICAGO, IL・5 HOURS AGO
CBS Chicago

CHICAGO (CBS)-- More than 30 dogs and puppies from Texas have arrived at PAWS Chicago. They came from a shelter damaged by a tornado. Many of the animals were inside a shelter near Houston, when a tornado ripped the roof off in a storm.While easing overcrowding, this will allow rescue groups down there to focus on fostering the pets of those families working to repair their damaged homes.The dogs will soon be ready for adoption.
CHICAGO, IL・1 DAY AGO
CBS Chicago

The suspected Chinese spy balloon that has been drifting across the United States for several days has been shot down off the coast of South Carolina.The balloon was shot down by U.S. fighter jets in U.S. airspace at 2:39 p.m. ET on Saturday, U.S. officials confirmed to CBS News. A senior defense official told CBS News that an F-22 dispatched out of Langley Air Force Base took down the balloon with one AIM-9X air-to-air missile. Defense officials previously told CBS News that the surveillance equipment attached to the balloon was the size of two to three school buses. Senior Biden administration officials...
SOUTH CAROLINA STATE・4 DAYS AGO