South Dakota's Kristi Noem bans the use of TikTok on government devices, says China uses the platform to 'manipulate' Americans 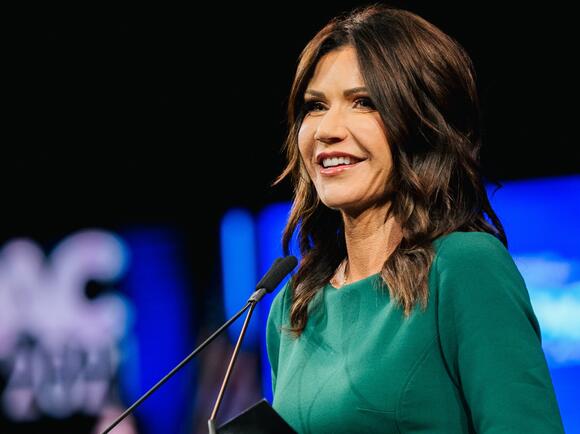 "South Dakota will have no part in the intelligence gathering operations of nations who hate us," Noem said in a press release .

"The Chinese Communist Party uses information that it gathers on TikTok to manipulate the American people, and they gather data off the devices that access the platform," she added.

The order, which Noem signed on Tuesday, takes effect immediately. It is unclear how many South Dakota state employees were actively using TikTok on government-owned devices.

US officials have, for years, raised security concerns about TikTok, which is owned by Chinese company ByteDance.

Earlier this year Buzzfeed reported that ByteDance had repeatedly accessed non-public data about US TikTok users.

After the Buzzfeed report was published, TikTok CEO Shou Zi Chew told Republican Senators in a letter that the company was working with Oracle to protect the data of its US users "with robust, independent oversight."

But last month a report by Forbes found that an internal team at the company was planning to use location information gathered from US users for surveillance purposes.

A representative for TikTok did not immediately respond to Insider's request for comment.

Noem is not the only US politician making moves to ban the app in some form.

Wisconsin GOP Representative Mike Gallagher on Sunday renewed his calls for a nationwide ban on TikTok, calling the platform "digital fentanyl" that is "addicting our kids."

"Tiktok is owned by ByteDance, ByteDance is controlled by the CCP [Chinese Communist Party], that means the CCP can track your location, it can track your keystrokes, it can censor your news — why would we give our foremost adversary that amount of power?" Gallagher said.

Ukrainian president Volodymyr Zelenskyy said Russian President Vladimir Putin is losing a lot more soldiers in the war as Russia's unprecedented attacks continued in Kyiv. What Happened: Zelenskyy, in an interview with Sky News, said, "The east is losing a lot of people. They don't care about that." "We count...
11 HOURS AGO
Benzinga

President Joe Biden has reportedly said there would be “consequences” for Saudi Arabia for collaborating with Russia to trim oil production, an indication that cracks have appeared in the relationship between the two long-time allies. What Happened: Biden told CNN’s Jake Tapper in an interview broadcast in October...
1 DAY AGO
Benzinga

Sen. Ted Cruz (R-Texas) shared his views on why it was difficult for members of the Republican Party to have an opposing view with former U.S. President Donald Trump in an interview at the 2022 Texas Tribune Festival, held in September. What Happened: Trump is a "unique" character, according to...
TEXAS STATE・20 HOURS AGO
CNN

Germany has confirmed that it will send Leopard 2 tanks to Ukraine following weeks of diplomatic pressure. Chancellor Olaf Scholz announced the move in a cabinet meeting, according to federal government spokesman Steffen Hebestreit. CNN's Fred Pleitgen has more on Russia's response.
1 DAY AGO
Business Insider

The Education Department asked for input on its proposals to reform student-loan repayment. A batch of commenters who oppose the relief responded.
2 DAYS AGO
The US Sun

A RUSSIAN warship armed with “unstoppable” hypersonic missiles is sailing towards the US coast in a show of strength, reports claim. The guided missile frigate Admiral Gorshkov has been closely monitored by Nato navies on its maiden voyage armed with 6,670mph Zircon weapons. An unconfirmed Russian Telegram channel...
2 DAYS AGO
Business Insider

Ukraine is burning through artillery shells. Now the US is increasing production by 500%.

The US currently manufactures just over 14,000 rounds of 155mm ammunition every month. Ukrainian forces have fired that many in just 48 hours.
HAWAII STATE・1 DAY AGO
Business Insider

Republicans have indicated that they're willing to hold off on raising the debt ceiling in order to secure cuts to Medicare and Social Security.
MASSACHUSETTS STATE・1 DAY AGO
Business Insider

The DOJ was willing to get a warrant to search Biden's home for documents if he didn't cooperate: CNN

Biden's cooperation in the hunt for classified documents at his private home meant the DOJ didn't need to get a search warrant, sources told CNN.
WILMINGTON, DE・10 HOURS AGO
Business Insider

Sheetz is reviewing its controversial 'smile policy' that prohibits employees from having 'missing, broken, or badly discolored teeth'

The head of Ukraine's military, Valerii Zaluzhnyi, said he had "no doubts" when he donated his $1 million inheritance.
WASHINGTON STATE・1 DAY AGO
Business Insider

The inquiry Trump launched to clear his name on Russia collusion ended up investigating him for potential financial crimes: NYT

It is not clear what happened to the probe, which started as a result of a tip by Italian officials.
1 HOUR AGO
Business Insider

The majority of Russia's armed forces are against the policies of their leaders, FSB defector says

Another Russian defector said that every second FSB officer wants to run away as they understand Russia won't win the war.
1 DAY AGO
WTRF- 7News

Russia is sticking to its failed strategy of filling gaps in decimated front-line units with 'ill-equipped, ill-trained' troops, US official says

A top US general said last week that the front line has become relatively "static," with Russian forces suffering a "tremendous amount of casualties."
2 DAYS AGO
Business Insider

Wagner's limited gains in eastern Ukraine have come at a high cost and triggered rifts between the mercenary group and the Russian military.
3 HOURS AGO
POLITICO

WASHINGTON – A panel of policymakers and educators, including author Dave Eggers and former U.S. Secretary of Education Arne Duncan, gathered at the U.S. Capitol on Wednesday to promote the American Teacher Act. The bill, if passed, would authorize the federal government to create four-year grants for states to enact and enforce minimum school teacher […] The post Teachers would get $60K minimum salary under bill in Congress making grants to states appeared first on Iowa Capital Dispatch.
ALABAMA STATE・30 MINUTES AGO