2 Reasons This Stock Could Outperform in 2023

Despite a terrible year for the stock market, some companies have escaped the sell-off. Biotech giant Gilead Sciences (NASDAQ: GILD) is a member of this elite club, having seen its shares rise by 15% year to date. Further, the drugmaker is riding momentum that could help it deliver another solid performance in 2023.

Let's consider two reasons why Gilead Sciences is worth serious consideration heading into the new year. 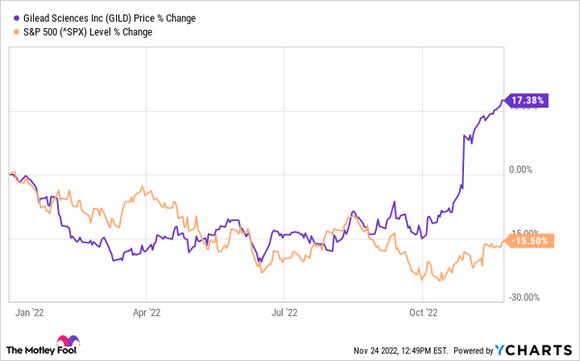 Gilead Sciences' most important unit by some margin remains its HIV business. Here is some evidence. In the first nine months of the year, the company generated total revenue of $19.9 billion, representing a year-over-year decrease of almost 1%. The biotech's HIV sales of $12.4 billion -- which rose by 5% year over year -- accounted for 62.4% of its top line.

Gilead Sciences' HIV segment encountered headwinds due to the pandemic. Screening and prescription volume dropped, leading to lower sales than the company would have recorded otherwise. However, things are slowly but surely getting back to normal. As management recently reported:

We are encouraged that on a year-over-year basis, the HIV treatment market across the U.S. and Europe has grown for five consecutive quarters (...) The market growth we are seeing suggests that activity has returned to pre-COVID trends.

The company expects the HIV treatment space to continue expanding at 2% to 3% per year. Few drugmakers are better positioned than Gilead Sciences to profit from that, be it in 2023 or beyond. The biotech boasts the leading HIV treatment in the U.S., Biktarvy, which enjoyed a 45% share of the market in the third quarter.

Descovy is another important product in Gilead Sciences' HIV arsenal. What's more, the company is on the verge of another critical regulatory decision in the U.S. Gilead Sciences is awaiting the potential approval of lenacapavir -- a potential long-lasting regimen for some HIV patients. Lenacapavir failed to earn the nod from regulators earlier this year as a result of manufacturing issues. But Gilead is confident it has worked out these issues, and it expects word from the U.S. Food and Drug Administration (FDA) on whether this therapy will be approved in the country by Dec. 27.

There is one more key reason why Gilead Sciences' HIV-related operations will look much stronger next year and lift its entire business. In 2020, the company lost patent exclusivity for two HIV treatments: Truvada and Atripla. Thankfully, the effect of these patent cliffs on the company's financial results continues to fade. In the first nine months of the year, Truvada contributed $102 million in sales, compared to $310 million reported in the comparable period of the previous fiscal year. Gilead Sciences' "other" HIV revenue, which includes sales of Atripla, came in at $45 million, representing a 70.6% year-over-year decline.

Truvada and Atripla's impact fading into insignificance, the FDA approval of lenacapavir, and the HIV market growing more should all help the biotech's most important segment perform even better next year.

Gilead Sciences may be too reliant on its HIV business. But the company is looking to develop innovative therapies in other areas. Within oncology, the biotech has 11 ongoing late-stage trials and many more in phase 1 or 2 studies. Even a modest 50% success on the company's phase 3 trials will yield key brand-new approvals or label expansions.

Gilead Sciences' inflammatory diseases pipeline is less mature, with most of its ongoing programs in this area in phase 1 studies. But we're seeing the biotech make a conscientious effort to diversify its lineup away from its HIV business. Gilead Sciences' revenue from Veklury, a COVID-19 medicine, helped the company stay afloat for the past three years.

The solid pipeline progress it will almost certainly record next year provides more evidence that it can thrive even if sales of Veklury drop substantially . That's excellent news for the company's future.

The market is forward-looking, and although Gilead Sciences' hasn't delivered blowout financial results this year, the company's stock has outperformed partly due to the company's solid prospects. Still, the biotech remains reasonably valued, with a forward price-to-earnings ratio of 12, compared to the S&P 500 index's 19.4 and the biotech industry 's 15.2. That's not to mention the drugmaker's solid dividend profile . Just one more reason why at these levels, Gilead Sciences is a buy heading into 2023.

3 Penny Stocks That Could Make You Filthy Rich

These low-priced equities could deliver enormous returns for risk-tolerant shareholders.
3 DAYS AGO
The Motley Fool

One of these stocks would have to rise 86% to do it -- but I wouldn't be surprised if it did.
1 DAY AGO
The Motley Fool

2 Warren Buffett Stocks That Could Crush the Market in 2023

Buffett beat the market last year, and these two stocks are poised for a recovery this year.
2 DAYS AGO
The Motley Fool

2 Hypergrowth Stocks to Buy in 2023 and Beyond

CrowdStrike and Dutch Bros have what it takes to crush the market this year.
2 DAYS AGO
The Motley Fool

Should you follow her lead?
2 DAYS AGO
The Motley Fool

How Much Will Social Security Benefits Rise In 2024? Here's What We Know

Every year, the Social Security Administration does a cost-of-living adjustment to benefits.
2 DAYS AGO
The Motley Fool

These companies offer attractive dividends that should keep rising in the future.
3 DAYS AGO
The Motley Fool

Stability and resilience are two key benefits that these three stocks offer.
1 DAY AGO
The Motley Fool

These former highfliers are ready to rally.
23 HOURS AGO
The Motley Fool

McDonald's and Vector Group both look positioned for lasting success, for different reasons.
2 DAYS AGO
The US Sun

WALMART is allegedly under investigation due to recent questions about their dietary supplements. These inquiries specifically have to do with magnesium products. Attorneys for Top Class Actions believe that Walmart may be mislabeling the magnesium supplements that are under the retail chain's Equate brand, according to Best Life. Magnesium is...
2 DAYS AGO
The Motley Fool

This spice maker has been cheaper in the past, but don't overlook the fact that its yield is relatively high today.
1 DAY AGO
The Motley Fool

3 ETFs That Are All You Need for Retirement

This super simple, low-maintenance portfolio maximizes your rewards while minimizing your risks.
2 DAYS AGO
The Motley Fool

Cloudflare and Fiverr are category-leading companies that could deliver incredible rebound returns.
17 HOURS AGO
The Motley Fool

Costco is built to succeed in all economic conditions.
2 DAYS AGO
The Motley Fool

It takes a cool head to prosper during a market crash.
22 HOURS AGO
The Motley Fool

Managing other people's money has historically been a lucrative business.
2 DAYS AGO
The Motley Fool

1 Excellent Growth Stock to Buy Near Its 52-Week Low

This year can't be much worse than 2022 for this healthcare specialist.
2 DAYS AGO
The Motley Fool

2 Ultra-High-Yielding Dividend Stocks That Could Soar in 2023

3 Tech Stocks With More Potential Than Any Cryptocurrency

Don't mess around with potential Ponzi schemes and fraudulent crypto operations. Put your money in these durable technology stocks instead.
1 DAY AGO