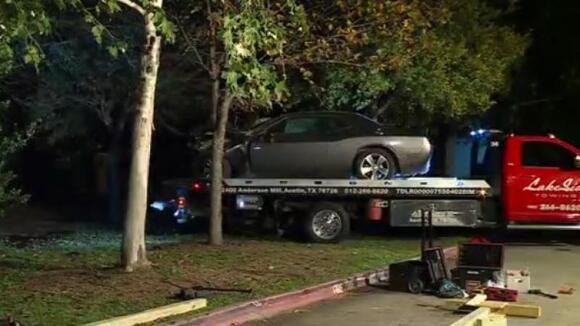 AUSTIN (KXAN) — No one was hurt after a car crashed into a condominium building near Burnet Road early Wednesday morning.

It happened at the Allandale Condos at 7685 North Cross Dr.

The Austin Fire Department said crews responded to the call around 2:15 a.m. When first responders arrived, they found a car crashed into the side of a building.

No one was inside the car. Once the car was removed, crews turned their attention to shoring up the side of the building, AFD said.

There were people inside the damaged building. They have been moved, according to AFD.

The Austin Police Department also responded to the crash and said no residents were hurt.

The Austin Fire Department posted on Twitter that crews strapped an 150-pound Mastiff mix into a sled-like stretcher Sunday evening and used ropes to pull him up a steep hill to safety. The post stated the dog's name is Mason, and he "fell down an incline near the Colorado River."
AUSTIN, TX・3 HOURS AGO
KXAN

The Austin Police Department is seeking the public's help in identifying two men suspected in a violent carjacking in north Austin, according to a APD news release.
AUSTIN, TX・3 HOURS AGO
KXAN

San Marcos Police confirmed to KXAN they responded to a shooting at The Retreat, an apartment complex located off Craddock Avenue.
SAN MARCOS, TX・1 DAY AGO
KXAN

According to APD, these high-tech cameras helped detectives crack dozens of violent crime cases between 2016 and 2020.
AUSTIN, TX・9 HOURS AGO
KXAN

The city of Round Rock is adding new speed limit signs to Old Settlers park after a safety analysis showed there was not appropriate signage along four roads within the park.
ROUND ROCK, TX・14 HOURS AGO
KXAN

No one else needed to be rescued, and there were no other injuries reported.
AUSTIN, TX・3 DAYS AGO
KXAN

Once upon a time, before Project Connect was put before voters, there was a different public transit system on the table: Gondolas.
AUSTIN, TX・12 HOURS AGO
KXAN

The city says crews plan to safely treat up to 55 acres near Mopac and State Highway 45 in Southwest Austin with the prescribed fire.
AUSTIN, TX・3 DAYS AGO
KXAN

Police said a family violence call led to a SWAT situation Friday afternoon because a woman will not leave her south Austin apartment.
AUSTIN, TX・3 DAYS AGO
KXAN

- In response to department-wide staffing shortages, on Feb. 1 the City of Austin is launching its first-ever citywide recruitment campaign to fill essential public service positions.
AUSTIN, TX・2 HOURS AGO
KXAN

In an effort to maintain transparency and build trust with the Austin community, the Austin Police Department released several materials related to the deadly officer-involved shooting that occurred Jan. 15, according to a APD news release.
AUSTIN, TX・3 DAYS AGO
KXAN

With Winter Storm Warnings issued in Central Texas, some school districts are changing their schedules this week.
AUSTIN, TX・8 HOURS AGO
KXAN

City of Austin gets $54M for more green public transportation

Texas falls only behind California for the highest number of catalytic convertor theft claims, according to the insurance company.
TEXAS STATE・2 DAYS AGO