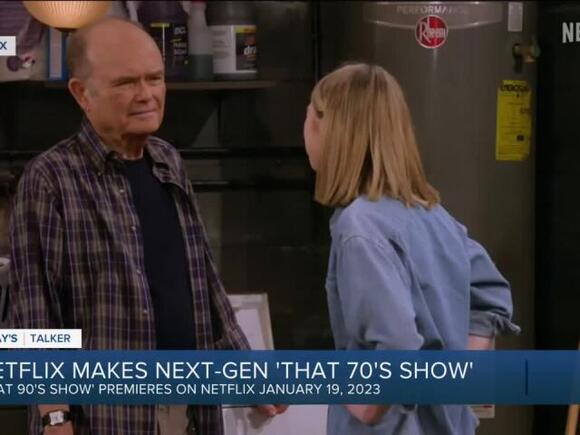 It's now time for Today's Talker! This morning we've got two trending stories to get to.

First, Netflix just dropped a teaser clip for its sequel series to "That '70s Show."

It was a hit sitcom set in the '70s which aired in the 90s and early 2000s. The sequel, "That 90's show," takes place two decades later and features the children of the teenagers in the original.

Actors Kurtwood Smith and Debra Jo Rupp, who played parents in the original series, now play grandparents with a new crop of youngsters hanging out in their basement.

Ashton Kutcher, Mila Kunis, and other stars from the original series are only seen in one of the new show's ten episodes. "That '90s Show" premieres on Netflix on Jan. 19.

And we listened to a lot of Justin Bieber in 2022.

Apple Music released its top music of the year and Bieber, along with Australian rapper "The Kid Laroi," topped its 2022 global song chart.

Elton John and Dua Lipa's "Cold Heart" was also one of the hottest songs of the year.

And "We Don't Talk about Bruno" from the movie "Encanto" was the song with the most-read lyrics.

That '70s Show lives on with That '90s Show, which picks up almost 20 years after the original show ended. Unfortunately, in that time span, a beloved character died off-screen. As noted from a couple of lines of dialog from Kitty Forman (Debra Jo Rupp), her mom, Bea Sigurdson, died between the shows' two time periods. Bea was played by the late TV icon Betty White, who died on Dec. 31, 2021, in four memorable episodes of the original show.
16 HOURS AGO
TMJ4 News

It's time for Today's Talker! John Mayer is hitting the road for his first-ever solo acoustic tour. The singer-songwriter made the announcement on Instagram.
NEWARK, NJ・2 DAYS AGO
INSIDE News

Jennifer Lopez and Marc Anthony have maintained a good friendship since they separated, and they do this for the well-being of the children they have in common. In addition, the ex-partner has always decided to support each other in any circumstance.
1 DAY AGO
News Breaking LIVE

The entertainment world is mourning the loss of one of their one as the star of several British hit movies and groundbreaking films has died at the age of 89, according to her family.
2 DAYS AGO
TMJ4 News

Steph Connects: Redefining what a 'Geek' looks and sounds like

GeekSet is redefining what a geek looks and sounds like, and is providing a space for African Americans to geek out.
2 DAYS AGO