Alzheimer’s drug works, but is it enough? 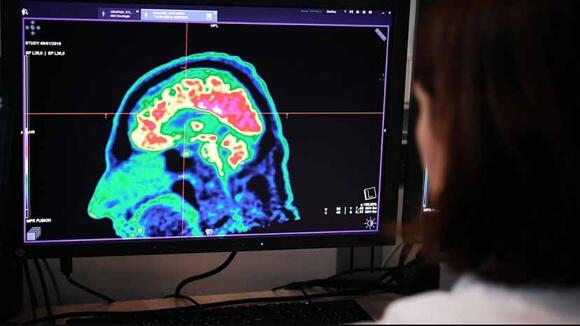 An experimental Alzheimer’s drug modestly slowed the brain disease’s inevitable worsening, researchers reported Tuesday — but it remains unclear how much difference that might make in people’s lives.

Japanese drugmaker Eisai and its U.S. partner Biogen had announced earlier this fall that the drug lecanemab appeared to work, a badly needed bright spot after repeated disappointments in the quest for better Alzheimer’s treatments.

Now the companies are providing full results of the study of nearly 1,800 people in the earliest stages of the mind-robbing disease. The data was presented at an Alzheimer’s meeting in San Francisco and published in The New England Journal of Medicine. U.S. regulators could approve the drug as soon as January.

Those given lecanemab declined more slowly — a difference of not quite half a point on that scale, concluded the research team led by Dr. Christopher van Dyck at Yale University.

That’s a hard-to-understand change, but measured a different way, lecanemab delayed patients’ worsening by about five months over the course of the study, Eisai’s Dr. Michael Irizarry told The Associated Press. Also, lecanemab recipients were 31% less likely to advance to the next stage of the disease during the study.

Winter storm in Oregon could cause hazardous road conditions

But doctors are divided over how much difference those changes may make for patients and families.

“It is unlikely that the small difference reported in this trial will be noticeable by individual patients,” said Dr. Madhav Thambisetty of the National Institute on Aging, who noted he wasn’t speaking for the government agency.

He said many researchers believe a meaningful improvement would require at least a difference of a full point on that 18-point scale.

But Dr. Ron Petersen, an Alzheimer’s expert at the Mayo Clinic, said the drug’s effect was “a modest one but I think it’s clinically meaningful” — because even a few months’ delay in progression could give someone a little more time when they’re functioning independently.

The trial is important because it shows a drug that attacks a sticky protein called amyloid — considered one of several culprits behind Alzheimer’s — can delay disease progression, said Maria Carrillo, chief science officer for the Alzheimer’s Association.

“We all understand that this is not a cure and we’re all trying to really grasp what it means to slow Alzheimer’s, because this is a first,” Carrillo said.

But any delay in cognitive decline early on could be meaningful for “how much time we have with our loved ones in a stage of disease where we can still enjoy family and outings, vacations, bucket lists,” she said.

Amyloid-targeting drugs can cause side effects that include swelling and bleeding in the brain, and lecanemab did as well. One type of this swelling was seen in about 13% of recipients. Eisai said most were mild or asymptomatic.

Crash kills at least 1 on Hwy 26 near Banks

Also, two deaths have been publicly reported among lecanemab users who also were taking blood-thinning medications for other health problems. Eisai said Tuesday the deaths can’t be attributed to the Alzheimer’s drug.

But Mayo’s Petersen said if lecanemab is approved for use in the U.S., he’d avoid prescribing it to people on blood thinners at least initially.

And Thambisetty said the death reports raise concern about how the drug may be tolerated outside of research studies “where patients are likely to be sicker and have multiple other medical conditions.”

The Food and Drug Administration is considering approving lecanemab under its fast-track program, with a decision expected in early January. If approved, it would be the second anti-amyloid drug on the market.

Nearly all treatments available for the 6 million Americans with Alzheimer’s — and millions more worldwide — only temporarily ease symptoms. Scientists don’t yet know exactly how Alzheimer’s forms but one theory is that gunky amyloid buildup plays a key role, although drug after drug that targets it has failed.

In a contentious move last year, the FDA approved the first amyloid-targeting drug, Biogen’s Aduhelm, despite lack of evidence of better patient outcomes. Insurers and many doctors have hesitated to prescribe the pricey drug — another reason experts have anxiously awaited word of how well the newer lecanemab may work.

If the FDA approves lecanemab, patients and their families will need a voice in deciding whether it’s worth the hassle of IV infusions and the risk of side effects for the chance of at least some delay in progression, Petersen said.

“I don’t think we’re going to stop the disease in its tracks” with just amyloid-targeting drugs, he added, saying it will take a combination of medications that target additional Alzheimer’s culprits.

Researchers are preparing to test lecanemab with other experimental drugs, and how it works in high-risk people before they show the first signs of memory problems.

Videos showing the violent arrest of 29-year-old Tyre Nichols, a Memphis man who died 3 days after he was beaten by police in a traffic stop Jan. 7, has been released by Memphis officials.
MEMPHIS, TN・2 DAYS AGO
KOIN 6 News

One of downtown Portland’s worst eyesores, O’Bryant Square at Southwest Park Avenue and Harvey Milk Street, is about to get a makeover.
PORTLAND, OR・2 DAYS AGO
KOIN 6 News

Actor Annie Wersching, best known for playing FBI agent Renee Walker in the series “24" and providing the voice for Tess in the video game “The Last of Us,” has died. She was 45.
LOS ANGELES, CA・20 HOURS AGO
Anita Durairaj

Dr. Daisy Sanchez is a doctor but she is also a TikTok influencer with millions of followers. According to an article in the Daily Dot, on December 30, 2022, Dr. Sanchez posted a video claiming that she was only making $12 per hour performing surgeries while a scrub tech (surgical technician) whose job involves setting up surgeries makes $80 per hour.
2 DAYS AGO
KOIN 6 News

Evusheld, the preventative monoclonal antibody treatment for COVID-19, has lost its emergency use authorization in the U.S. as it is most likely not effective against the strains of the coronavirus currently circulating.
OREGON STATE・3 DAYS AGO
KOIN 6 News

Man crushed to death by urinal in London

A shotgun blast that hit a house in Portland's Cully neighborhood in early December led to the arrest of a 36-year-old felon on 14 separate charges.
PORTLAND, OR・1 DAY AGO
newsnationnow.com

Opioid 40X stronger than fentanyl rising in cities across US

(NewsNation) — A synthetic opioid first developed in the 1950s is falling back into the hands of Americans. Nitazines, nicknamed Frankenstein opioids, are up to 40 times stronger than fentanyl. Fentanyl is already 50 times more powerful than heroin. Nitazine comes in powder, pill and liquid form and is...
TENNESSEE STATE・3 DAYS AGO
KOIN 6 News

A fight in a Clark County motel room left one man dead and another booked into jail for 2nd-degree murder.
CLARK COUNTY, WA・2 DAYS AGO
KOIN 6 News

A man wanted for parole and probation violations crashed a Mercedes hit another car as he tried to speed away in Gresham early Saturday night.
GRESHAM, OR・16 HOURS AGO
KOIN 6 News

A 13-year-old was shot in both legs when a gun went off inside a car early Friday, Gresham police confirmed.
PORTLAND, OR・1 DAY AGO
KOIN 6 News

Sip on this: McDonald's is testing new, strawless lids in an effort to reduce the use of small plastics.
2 DAYS AGO
KOIN 6 News

WHO updates list of medicines to stockpile for nuclear emergencies

The updated list, which advises nations on how to stockpile for nuclear and radiological accidents and emergencies, is included in a new WHO report reflecting data and research for related medical treatment that emerged in the last decade.
1 DAY AGO
KOIN 6 News

With ChatGPT rising in popularity, what’s a parent to do?

The new AI technology has become so popular that some schools have banned it as it makes its way into the lives of K-12 and college students around the U.S. It has made headlines for its humanlike and unique responses to questions, which sparked concern among some educators around cheating and a loss of critical thinking skills.
CALIFORNIA STATE・1 DAY AGO
KOIN 6 News

Starbucks fans are steamed: The psychology behind why changes to a rewards program are stirring up anger, even though many will get grande benefits

Starbucks is modifying its rewards program, and the news is full of stories of outraged consumers. Here's what they're missing.
2 DAYS AGO
KOIN 6 News

About 1 in 3 children in the US have body mass indexes that would be categorized as overweight or obese. The number has grown during the COVID-19 pandemic,
1 DAY AGO
KOIN 6 News

Additional law enforcement officers in Tennessee — this time with the Shelby County Sheriff's Office — are under investigation following the release of footage on Friday night of the encounter that resulted in Tyre Nichols' death.
SHELBY COUNTY, TN・2 DAYS AGO
KOIN 6 News

A New Jersey man is suspected of driving a school bus under the influence after crashing into a house in the town of West Caldwell on Friday morning, according to police.
WEST CALDWELL, NJ・2 DAYS AGO
KOIN 6 News

Why parents may see a smaller tax return this year

If inflation wasn't bad enough, it's shaping up to be a year of disappointing tax refunds for many people, perhaps especially for parents.
2 DAYS AGO