Tiger Woods on competing: ‘I don’t have much left in this leg’ 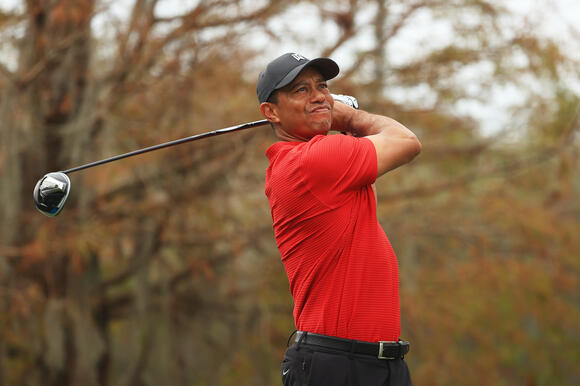 NASSAU, Bahamas (AP) — Tiger Woods painted an uncertain picture about how much golf he can play, saying Tuesday that “I don’t have much left in this leg.”

He also doesn’t have much hope the PGA Tour and the Saudi-funded rival league can get along unless Greg Norman is out as LIV Golf’s leader.

“Not right now. Not with their leadership. Not with Greg there and his animosity toward the tour itself,” Woods said. “I don’t see that happening.”

Rory McIlroy also said in Dubai two weeks ago that Norman needs to “exit stage left” before there can be any meaningful discussions between the PGA Tour and LIV Golf.

Woods artfully skirted around other questions on Tuesday, such as details on two unexpected surgeries he had last year and whether the 20-man field at the Hero World Challenge should be getting points toward the world ranking.

He was forceful on the effect of LIV Golf, referring to friction the rival league has caused and how lawsuits stand in the way of any reconciliation.

“If one side has so much animosity — someone trying to destroy our tour — then how do we work with that?” Woods said.

US beats Iran in World Cup amid political controversy

Phil Mickelson was among 10 players who filed an antitrust lawsuit against the PGA Tour in August, a lawsuit since taken over by LIV Golf. Bryson DeChambeau, Peter Uihlein and Matt Jones are the only players still involved as plaintiffs. The PGA Tour since has filed a countersuit. A trial date is tentatively scheduled for January 2024.

Woods said the lawsuits would have to be settled — he used the word “stay” on more than one occasion — or there is no way forward.

Woods is at Albany Golf Club strictly as the tournament host. He had to withdraw on Monday because of plantar fasciitis in his right foot that makes it too difficult to walk over 72 holes, even on a relatively flat course for a holiday event.

Woods said he was posting low scores at home in Florida while riding in a cart. And his next two events — a made-for-TV match over 12 holes on Dec. 10, and the PNC Championship with his son the following weekend — allow for carts.

“I can hit the golf ball and hit whatever shot you want,” he said. “I just can’t walk.”

He said the plantar fasciitis was related to injuries he suffered in the Los Angeles car crash in February 2021, which ended any hope of him playing on a regular basis.

A year ago, Woods was just starting to take full swings with the driver and his ambition was to make it to St. Andrews for the 150th edition of the British Open. He wound up playing the Masters and the PGA Championship, too.

That amounted to nine rounds — four at Augusta National, three at the PGA Championship (he withdrew after the third round) and two at St. Andrews.

Woods felt he was making progress in the months after the British Open, only to hurt his right foot while trying to prepare for a 72-hole event in the Bahamas.

“When you get plantar fasciitis, the worst thing you can do is walk, and I was walking more and more and more, trying to get my legs ready for this event, and I just kept making it worse,” he said. “So had to shut it down.”

He said he would take a month or two to rest, which won’t affect his golf schedule because he wasn’t going to play that much, anyway.

“The goal is to play just the major championships and maybe one or two more. That’s it. Physically, that’s all I can do. I told you that (at) the beginning of this year, too,” he said.

“I mean, I don’t have much left in this leg, so gear up for the biggest ones and hopefully, lightning catches in a bottle and I’m up there in contention with a chance to win, and hopefully, I remember how to do that.”

He said he did everything to prepare for St. Andrews, only for his leg to act up on him and lead to an early departure packed with emotion. Woods does not anticipate returning to another Open at St. Andrews.

His health wasn’t great that week beyond his leg, though it wasn’t COVID-19.

McIlroy, in a wide-ranging interview with the Sunday Independent in Ireland, said he and Woods played a practice round at Ballybunion on the Thursday before the British Open and McIlroy was feeling ill afterward.

He said sweat was pouring off him and his temperature spiked. McIlroy called Woods, who reported he was feeling fine. But then Woods texted him that night and said he had chills and a fever.

“And I’m like, ‘(Expletive), I’ve just given Tiger COVID!’ This is horrendous!’” McIlroy said. “So we both had COVID going into the Open.”

Woods said he tested for the coronavirus and it came back negative.

“Was I feeling under the weather? Yes, wasn’t feeling great the whole week,” Woods said. “But I never got a positive test.”

ROCKFORD, Ill. (WTVO) — Rockford Police arrested three people Monday night following a shooting after what was described as a drug deal gone awry. Officers were called to the 800 block of Cottage Grove around 7:25 p.m. for a reported shooting. Witnesses told police they saw a person at the home shooting toward a blue […]
ROCKFORD, IL・13 HOURS AGO
MyStateline.com WTVO WQRF

Whether you dread it or welcome it, daylight saving time is fast approaching this year.
FLORIDA STATE・2 DAYS AGO
MyStateline.com WTVO WQRF

Two children abducted from Missouri were found inside of a Florida grocery store on Wednesday, nearly one year after they disappeared.
HIGH SPRINGS, FL・2 DAYS AGO
MyStateline.com WTVO WQRF

ROCKFORD, Ill. (WTVO) — Rockford Police have charged Larry Webb, 64, with killing a teen in a street race crash on September 5th, 2022. According to the charging documents, Webb was driving a silver 2003 Saturn L200 when he was involved in a high-speed, illegal street race with another car on West Jefferson Street. At […]
ROCKFORD, IL・12 HOURS AGO
MyStateline.com WTVO WQRF

Driver killed in car vs semi crash in Rockford

ROCKFORD, Ill. (WTVO) — Police are warning motorists to avoid the area of Samuelson Road and Falcon Road after a car was involved in a crash with a semi. The crash happened around 8:54 a.m. According to the Winnebago County Coroner, a 41-year-old man in a Jeep Compass was headed west on Samuelson Road and […]
ROCKFORD, IL・17 HOURS AGO
MyStateline.com WTVO WQRF

Rockford police warn of suspect with a gun, intentionally crashing into cars

ROCKFORD, Ill. (WTVO) — Rockford Police are searching for a suspect or suspects who have been attacking motorists after two similar incidents were reported on Saturday. According to police, around 7:30 p.m., an officer was in the process of assisting a driver with a disabled vehicle on Ethel Avenue. A 42-year-old man drove up and […]
ROCKFORD, IL・1 DAY AGO
MyStateline.com WTVO WQRF

FREEPORT, Ill. (WTVO) — Police in Freeport say a Monday night shooting that damaged a home was not a random act. According to police, officers responded to a reported shooting around 9:09 p.m. in the 500 block of S. McKinley Avenue. The home bore evidence of gunfire, police said, but no one was injured. Investigators […]
FREEPORT, IL・12 HOURS AGO
MyStateline.com WTVO WQRF

15 people hospitalized after exposure to hazardous materials at Rockford airport

ROCKFORD, Ill. (WTVO) — Fifteen people were hospitalized after coming in contact with hazardous chemicals at the Chicago Rockford International Airport on Tuesday. According to the Rockford Fire Department, around 11:44 a.m., a forklift operator at the RFD cargo center, located at 6020 Cessna Drive, caused the breach of a barrel containing toxic dry powder […]
ROCKFORD, IL・12 HOURS AGO
MyStateline.com WTVO WQRF

ROCKFORD, Ill. (WTVO) — Two 15-year-old teenagers have been charged after police say they were shooting guns in the street Saturday morning. According to Rockford Police, officers were called to the scene in the 1600 block of 9th Street. Upon arrival, police found multiple shell casings in the street. Minutes later, police spotted the teens […]
ROCKFORD, IL・1 DAY AGO
MyStateline.com WTVO WQRF

MADISON, Wis. (WTVO) — Alfonso Randall, 40, has been sentenced to spend 3 years in federal prison for being a felon in possession of a firearm during a traffic stop in which he threatened law enforcement. According to the U.S. Department of Justice, Janesville Police were conducting a traffic stop on February 20th, 2021. Police […]
JANESVILLE, WI・10 HOURS AGO
MyStateline.com WTVO WQRF

Woman recovering after being shot in the jaw in Rockford

ROCKFORD, Ill. (WTVO) — A 33-year-old woman was shot in the jaw in the parking lot of a West State liquor store on Saturday afternoon, according to police. Rockford Police are still searching for two male suspects who reportedly walked past the woman as she was opening her car door, in the parking lot of […]
ROCKFORD, IL・1 DAY AGO
MyStateline.com WTVO WQRF

SPRINGFIELD, Ill. (WTVO) — Illinois is offering a $40 million grant to help develop industrial sites across the state, in an effort to boost businesses. The money will range from $250,000 to $5 million to develop “megasites,” large, undeveloped pieces of land ready for manufacturers, distribution centers, and other industrial uses. The amount each applicant […]
ILLINOIS STATE・1 DAY AGO
MyStateline.com WTVO WQRF

Illinois has spent 70% of Pritzker’s time in office under disaster proclamation: report

SPRINGFIELD, Ill. (WTVO) — Illinois, one of only 8 states still under a COVID-19 health emergency, has been under a disaster proclamation for 70% of Gov. JB Pritzker’s time in office, a new report has found. According to the Illinois Policy Institute, Pritzker has been in office 1,483 days and has issued consecutive 30-day disaster […]
ILLINOIS STATE・1 DAY AGO
MyStateline.com WTVO WQRF

Is it illegal to park in front of my mailbox?

ROCKFORD, Ill. (WTVO) — People who have a get together at their place might know that having enough parking can be an issue, but can they park in front of mailbox without reprecussions? While parking in front of a mailbox is not illegal, it can lead to problems with residents getting their mail, according to […]
ROCKFORD, IL・2 DAYS AGO
MyStateline.com WTVO WQRF

KNOX COUNTY, Ill — A woman accused of concealing a body in a storage unit now faces more severe charges – including murder. In October 2022, detectives from the Knox County Sheriff’s Office arrested a 50-year-old suspect in connection with a body found in a Maquon, Ill., storage unit. Marcy L. Oglesby, of Maquon, was […]
MAQUON, IL・14 HOURS AGO
MyStateline.com WTVO WQRF

AMC changing ticket prices based on where you sit in theater

AMC has announced “Sightline,” a new three-tiered pricing system in which moviegoers will pay a certain price for their tickets depending on where they sit.
1 DAY AGO
MyStateline.com WTVO WQRF

Having foot pain? Why doctors say working from home may be to blame

Have your feet been aching lately? You might have "pandemic foot."
OHIO STATE・2 DAYS AGO