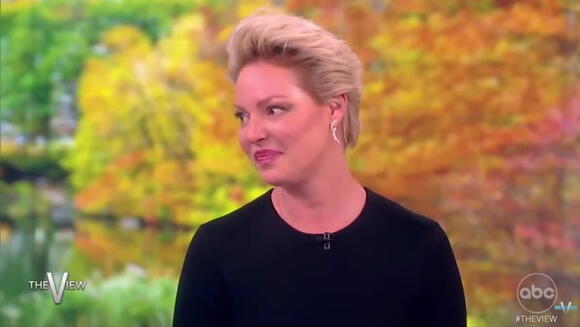 Katherine Heigl has reflected on trying to balance motherhood with work.

The 27 Dresses actor opened up about how difficult it was to get time away from filming Grey’s Anatomy to bond with her newly adopted daughter at the time, Naleigh, who is now 13.

Heigl and her husband Josh Kelley adopted Naleigh in 2009. The baby came from South Korea and was just nine months old when she became part of the actor’s family.

In a recent appearance on The View , Heigl said: “Naleigh came to us at nine months, and three days later, I got on a plane and went to work in Atlanta.

“At the time, becoming a new mother, I was just like, ‘I got it! I can handle this’. They’ve told us we can have it all. We can have careers and have families, and it’s all going to be great.”

But working on set away from home impacted how much time Heigl got to see her daughter.

“I never saw that baby,” she said. “I was at work with three triplets who were playing my goddaughter, and I spent more time with them than I did with my new daughter.”

Heigl said that because of her absence, Naleigh bonded more with Kelley because “he was with her”.

“I was always afraid that I had missed that opportunity to really bond with her and that she didn’t love me,” the actor confessed.

The show’s producers played a throwback clip from 2012, when Naleigh was in the audience to support her mother while she did an interview.

It was the first time Naleigh had accompanied Heigl to The View . The clip showed Heigl talking about the adoption process while the camera pans to the young girl.

Naleigh makes eye contact with Heigl and proceeds to run up onto the stage to hug her. Rewatching the moment left Heigl in tears, as she dabbed at her eyes.

Elsewhere in the interview, Heigl was asked if she would let her children go into the modelling industry, which is where she began her career.

She joked in response: “Oh god, thanks. Thank you so much for that. Now my children have ammunition.”

Turning serious, Heigl said she would not “schlep” her daughter “all over the city” like her mother did while she was young.

“I mean, we were taking subways, hoofing it, we took the train into Grand Central. We went from one side of the city to the other side for go-sees and auditions and all this stuff.”

Heigl said that, while she wouldn’t put her children through that, she “loved” the experience.

Heigl and Kelley are also parents to 10-year-old daughter Adalaide, who was adopted from the US, and five-year-old Joshua, who is their biological son.

All the comments on here are bashing the mother. The father took care of the kids. If it was reversed and the father worked while she stayed home, would you judge him the same way. One parent needs to work while one cares for the kids.

so many judgmental people on this thread 🙁 first "she doesn't deserve a child" "why an Asian baby" "she's a horrible mother" "she's difficult to work with" just to name a few of the horrible things said about her. All I can think of is the people with such nasty comment's must be so miserable in your lives that you want to cut down someone you don't even know simply bc she wanted a family. A parent has to work to provide for their children and that's what she was doing

Odele Ventimiglia, the daughter of Sopranos actor John Ventimiglia, has died at the age of 25 just three months after giving birth. Ms Ventimiglia died on 12 January and the cause of death has not been made public. Mother Belinda Cape said in a post on Facebook that the family was “heartbroken”. Mr Ventimiglia appeared on the HBO show between 1999 and 2007 as Artie Bucco. “Heartbroken to have to post our darling Odele’s funeral notice. Her sister Lucinda and I have been overwhelmed by the messages of support and love we have received, and your remembrances of how cherished...
BROOKLYN, NY・14 HOURS AGO
OK! Magazine

Nearly two weeks after Lisa Marie Presley's sudden passing on January 12, ex-husband Michael Lockwood — the father of her 14-year-old twins, Finley and Harper — filed docs to try and find out how the singer's assets will be divvied up.According to Radar, Lockwood's attorney notified the court of the death and said, "We do not currently know the intended Executors and Trustees that the late Lisa Marie Presley had named.”Lockwood's confusion doesn't come as much of a surprise given he and the late star were in an ongoing divorce battle over monthly child support payments, though they eventually came...
2 DAYS AGO
justpene50

Woman Gives Her Son Her Home. He and His Wife Later Decide They Need Her Bedroom for their new Baby

**This is a true story as told to me by a close relative, used with permission**. A woman was married and had one son. Her husband died along the way and the woman continued raising her son alone. She never remarried. Her son grew into a fine young man and eventually, he found a beautiful young lady, and they got married.
1 DAY AGO
Ingram Atkinson

After Being Told to Pay for Everyone’s Meal, Woman Silently Leaves Restaurant

A recent incident has sparked debate on whether a woman was in the wrong for silently getting up and walking out of a New Year's Eve dinner after being told to pay for everyone at the table, including her in-laws.
2 DAYS AGO
OK! Magazine

Priscilla Presley has requested that a judge strike down a suspicious amendment to her late daughter Lisa Marie Presley's 2010. The change to the paperwork ousts both her and Lisa Marie's former business manager, Barry Siegel, as trustees, and replaces them with her children, Riley and Benjamin Keough.Priscilla is claiming that she had never been notified of the amendment and suspects the change to the trust could have been falsified, citing that her own name is misspelled in the document and that Lisa Marie's signature "appears inconsistent with her usual and customary signature."AUSTIN BUTLER ADMITS IT'S 'BITTERSWEET' TO RECEIVE OSCAR...
11 HOURS AGO
The Independent

Chelsea Handler has opened up about her experience with the diabetes medication Ozempic, with the comedian revealing that she “didn’t know” she was on the prescription drug often used for weight loss.Handler, 47, spoke candidly about the alleged widespread use of Ozempic in Hollywood, and her concerns over its popularity, during an appearance on Alex Cooper’s Call her Daddy podcast.During the conversation, Handler revealed that she was unknowingly prescribed the medication, which is intended to treat type 2 diabetes, by her anti-ageing doctor, who the comedian said “hands it out to anybody”.“So, my anti-ageing doctor just hands it out...
1 DAY AGO
The Independent

When people accused me recently of criticising Prince Harry and Meghan Markle for “profiteering” from my grandfather’s name, I was shocked. Because it was false. I had never accused Harry and Meghan of doing this.Instead, I was misquoted, leading to global news coverage that weaponised my name – and the name of my grandfather, the late anti-apartheid activist and first president of South Africa, Nelson Mandela – to target a woman of colour.It is true that I feel terribly disappointed whenever the Mandela name or face is used for commercial purposes without any benefit to vision he stood for.But...
18 HOURS AGO
The Independent

Hilary Duff is on board with the Jennifer Coolidge renaissance.During an appearance on Bravo’s Watch What Happens Live on Thursday, the Lizzie McGuire alum was asked by a fan about her favorite memories of working with Jennifer Coolidge in the 2004 movie, A Cinderella Story.“I can’t even begin to tell you how much I’ve just been, like, obsessed with this past year for Jennifer Coolidge,” Duff said of Coolidge, whose received critical acclaim for her role as Tanya McQuoid in HBO’s The White Lotus.Hilary Duff and Jennifer Coolidge starred alongside each other in the high school rom-com remake of...
7 HOURS AGO
The Independent

A Boy George superfan has splashed out a whopping £20,000 pounds on plastic surgery to look like his idol. Liam Halewood, 36, had 10 different facial surgeries to make himself resemble the singer, on top of hair transplants and skin peels. This video shows the Blackpool entertainer performing on stage as a crowd cheers him on. "Boy George is iconic - the LGBTQ+ community wouldn't be where we are today if it wasn't for people like Boy George coming out," he said. Click here to sign up for our newsletters. Read More The imposter in Congress | On The GroundDolphins glide through Floridian waters in stunning drone footageSandi Toksvig condemns Church of England's 'Orwellian' approach to LGBT+ community
9 HOURS AGO