News 4 is Buffalo's Local News Leader. Visit us at wivb.com.

Hope Rises: Helping families through the Giving Tree Holiday Give Back campaign 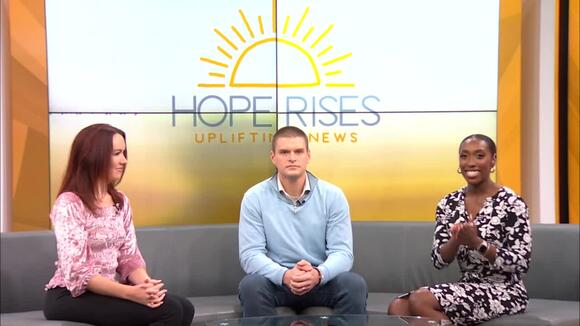 BUFFALO, N.Y. (WIVB) — Friday morning on Wake Up!, we were joined by Hope Rises’ Kate Glaser and Pride Martial Arts Academy’s Todd Patterson, who are working together as part of the Giving Tree Holiday Give Back campaign.

They and other community partners are helping make sure numerous families have a special holiday season this year.

It’s Hope Rises’ second year with the campaign, and this year, they’re lending a hand to 100 families, bringing the campaign’s overall total to roughly 400 families helped.

Families who can benefit from this campaign include those from all sorts of backgrounds, including those with foster children, single-parent households and children battling cancer.

Learn more about how you can get involved by clicking/tapping here.

Evan Anstey is an Associated Press Award, JANY Award and Emmy-nominated digital producer who has been part of the News 4 team since 2015. See more of his work here and follow him on Twitter .

BUFFALO, N.Y. (WIVB) — If you’re looking for a night out this weekend, “Stomp” is returning to the heart of the City of Buffalo and is encouraging audience members to fight food insecurity in our community–one food donation at a time. Playing on Friday, Jan. 27 and Saturday, Jan. 28 at Shea’s, the high energy […]
BUFFALO, NY・1 DAY AGO
News 4 Buffalo

Friday morning on Wake Up, we got to talk with Zeneta Everhart, who shared the positive impact she's making in the community.
BUFFALO, NY・1 DAY AGO
News 4 Buffalo

BUFFALO, N.Y. (WIVB) — Members of the Buffalo community are paying their respects for the Liggin’s family. The family lost five children between the ages of two and 10 in a house fire on Dartmouth avenue on New Years Eve. “It’s very sad, very somber, as anyone would expect. You know you see five coffins, […]
BUFFALO, NY・18 HOURS AGO
News 4 Buffalo

WNY soloist to perform with BPO after beating cancer… twice

BUFFALO, N.Y. (WIVB) — The Buffalo Philharmonic is celebrating Mozart’s birthday this week with two special concerts, honoring his best work of art. And a soloist in the show is worth celebrating too. “My brother and I were just always singing and harmonizing to any song that we heard on the radio,” said Rachel Mikol, […]
BUFFALO, NY・17 HOURS AGO
News 4 Buffalo

Behind the scenes of Disney on Ice in Buffalo

Disney on Ice is back in Buffalo through Sunday.
BUFFALO, NY・1 DAY AGO
News 4 Buffalo

‘They are giving us a chance to get back on our feet’: Niagara County family thanks community for donations following house fire

WILSON N.Y. (WIVB) – Businesses across Western New York are coming together to help a local family that lost everything in a house fire last week. That fire sent a father and son to area hospitals, where they continue to recover. Jacob Wankasky owns The Old Chapel Antique and Artisan Market in North Tonawanda. His […]
NIAGARA COUNTY, NY・4 DAYS AGO
News 4 Buffalo

Camps for kids at Buffalo Museum of Science

Believe it or not, it's not too early to start thinking about summer camps.
BUFFALO, NY・3 DAYS AGO
News 4 Buffalo

BUFFALO, N.Y. (WIVB) — 26-year-old Brianna Digiacomo of Hamburg has been battling polycystic kidney disease her whole life. After her body rejected a kidney from a loved one during her first surgery a few years ago, she is looking for a kidney donor to save her life. Diagacomo, her aunt Tara Ziemann and close family […]
HAMBURG, NY・4 DAYS AGO
News 4 Buffalo

The DA's office says the victims were scammed in 2018.
ERIE COUNTY, NY・21 HOURS AGO
News 4 Buffalo

Are you ready 4 the weekend?
BUFFALO, NY・1 DAY AGO
News 4 Buffalo

BUFFALO, N.Y. (WIVB) — Following the release of videos Friday night from Memphis officials showing the fatal beating of 29-year-old Tyre Nichols by officers, local government leaders are speaking out about the footage. Tonight, I watched the camera footage of the vicious attack that killed Tyre Nichols with members of the community in my office. […]
BUFFALO, NY・14 HOURS AGO
News 4 Buffalo

HAMBURG, N.Y. (WIVB) — Many Bills fans are still reeling after yesterday’s loss, but one Hamburg family is grateful for a big opportunity to attend the game. For one Bills fan, it was his first time watching a game in person at Highmark Stadium. Despite the loss, he said it was a fun experience and […]
HAMBURG, NY・4 DAYS AGO
News 4 Buffalo

‘We are really saddened and angered’: Asian-American community in WNY outraged over mass shootings in California

BUFFALO, N.Y. (WIVB) — The mass shootings in California have rattled the Asian-American community here in Buffalo. Jian Feng is the chair of the Chinese Club of Western New York and says it’s hard to even put into words how they’re feeling about this, but they’re sad. “It really brings a lot of feeling that […]
BUFFALO, NY・3 DAYS AGO
News 4 Buffalo

BUFFALO, N.Y. (WIVB) – The Galbani Italian Heritage Festival will be held on Hertel Avenue once again this summer, with organizers on Wednesday officially announcing the dates of the 2023 event. The beloved street festival will bring Buffalo’s robust Italian dining scene back to North Buffalo in mid-July, running Friday through Sunday, July 14-16. The […]
BUFFALO, NY・2 DAYS AGO
News 4 Buffalo

The hiring event is happening in Tonawanda.
TONAWANDA, NY・1 DAY AGO
News 4 Buffalo

TONAWANDA, N.Y. (WIVB) — Hundreds of thousands of dollars is going towards repairing one of the two golf domes that were damaged in the blizzard on Christmas weekend. The Paddock Chevrolet Golf Dome in the town of Tonawanda was heavily damaged and tore down on Christmas Eve after one of the inflators froze. The dome […]
TONAWANDA, NY・3 DAYS AGO

News 4 is Buffalo's Local News Leader. Visit us at wivb.com.