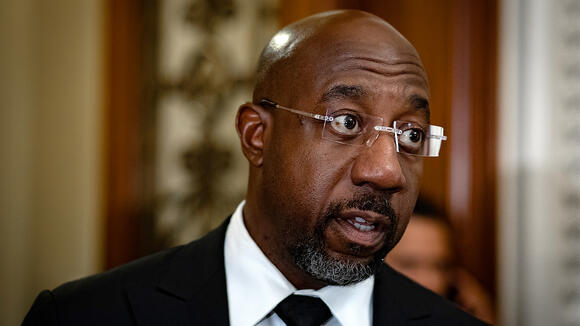 Sen. Raphael Warnock’s (D-Ga.) campaign is releasing a trio of digital ads in Vietnamese , Mandarin and Korean in an effort to mobilize Asian Americans and Pacific Islander (AAPI) voters one week out from Georgia’s Senate runoff race.

The ads — which were first shared with The Hill — feature voters explaining why they are voting for Warnock over Republican Herschel Walker in the three languages. The spots, titled “Proud,” include translations.

“I’m proud to call Georgia home, but I’d be embarrassed to call Herschel Walker my senator,” the voters say in the ads. “So I’m doing my part and voting for Reverend Warnock in the runoff on Dec. 6. I hope you’ll join me.”

The Warnock campaign is zeroing in on AAPI voters after data showed that Asian American voters surged in Georgia between 2016 and 2020. According to AAPIData.com , the demographic grew by 84 percent — or 61,000 votes — in the Peach State within that time frame.

“AAPI Georgians play a critical role in our communities and in our elections. That’s why Reverend Warnock has made it a priority to deliver for Georgia’s AAPI community by lowering health care costs, protecting voting rights, and supporting AAPI-owned small businesses,” Brasher said in a statement to The Hill.

“Our campaign is proud of our unprecedented investments to mobilize the AAPI vote and encourage every voter to make their voices heard on or before December 6th,” she added.

The campaign is launching the ads with one week to go until Georgia’s Senate runoff race. Walker, a former football player, is challenging Warnock, who was elected to the Senate in 2021 through a special election and is now vying for his first full term.

The race is headed to a runoff after neither candidate secured at least 50 percent of the vote earlier this month. While Democrats are already projected to win 50 votes in the Senate — giving them control of the chamber in the next Congress — the Georgia race will determine if that majority is 50-50, with Vice President Harris’s tie-breaking vote, or if Democrats have a one-vote edge in a 51-49 split.

In a poll conducted last week by FrederickPolls, COMPETE Digital and AMMPolitical, the two candidates were tied at 50 .

According to data from the Georgia secretary of state’s office , more than 503,000 voters have cast ballots thus far in the runoff race, marking a 7.2 percent turnout. Of that group, 9,970 are Asian or Pacific Islander.

Some Republicans in Congress are wearing pins in the shape of an assault weapon in committee meetings and on the House floor. While Democrats says the pins are insensitive and out of touch, Republicans say it's their right to stand up for issues they believe in.
GEORGIA STATE・3 DAYS AGO
WJBF

Whether you dread it or welcome it, daylight saving time is fast approaching this year.
FLORIDA STATE・1 DAY AGO
WJBF

Two children abducted from Missouri were found inside of a Florida grocery store on Wednesday, nearly one year after they disappeared.
HIGH SPRINGS, FL・1 DAY AGO
Business Insider

Rep. Marjorie Taylor Greene said that working in Congress has made her life "miserable" for various reasons, including that she has lost money.
GEORGIA STATE・1 DAY AGO
SheKnows

Donald Trump’s campaign team in Wisconsin knew they lost the state in the 2020 presidential election, but that didn’t stop them from trying to spin a fraud narrative. There’s new audio that is confirming that Republican officials behind the scenes were trying to cook up a story that the election was stolen.  This is the latest chaotic issue to come down the pike as Donald Trump tries to run for president for the third time. According to the Associated Press, who posted the leaked audio, the voice is of Andrew Iverson, who led the former president’s campaign in Wisconsin, and shockingly...
WISCONSIN STATE・3 DAYS AGO
WJBF

AUGUSTA, Ga. (WJBF)– As many in the country watched the spy balloon drop on TV, a former Augustan saw it LIVE at his house. Video was shot by Brian Bolgla who now lives in Myrtle Beach. He was standing in his driveway watching it unfold. He describes to WJBF’s Barclay Bishop what he saw and […]
AUGUSTA, GA・1 DAY AGO
WJBF

Investigators have arrested a man in a crash on Olive Road that killed a bicyclist.
RICHMOND COUNTY, GA・3 DAYS AGO
WJBF

China said Friday that a balloon spotted over American airspace was used for weather research and was blown off course, despite U.S. suspicion it was spying. The discovery further strained already tense relations between Beijing and Washington.
MONTANA STATE・3 DAYS AGO
WJBF

The Biden administration is considering a plan to shoot down a large Chinese balloon suspected of conducting surveillance on the U.S. military, by bringing it down once it is above the Atlantic Ocean where the remnants could potentially be recovered, according to four U.S. officials.
MYRTLE BEACH, SC・2 DAYS AGO
Toni Koraza

Photo byPhoto 122725292 © Joe Tabb | Dreamstime.com. DeSantis is keeping his 2024 plans quiet, while Trump loses no time to coming after DeSantis. Former President Donald Trump intensified the tension between him and Ron DeSantis when he shared a video of the Florida governor on his Truth Social page.
FLORIDA STATE・10 HOURS AGO
Deseret News

RICHMOND COUNTY, Ga. (WJBF) – One person has died after being ejected from the vehicle in an accident. According to the Richmond County Sheriff’s Traffic Division, officers responded to an accident on the I-20 Eastbound exit ramp to I-520 Westbound on Monday at 1:09 P.M. According to investigators, the vehicle exited the roadway in an […]
RICHMOND COUNTY, GA・1 HOUR AGO
WJBF

Poll: Some Democrats now believe President Biden should only serve one term

WASHINGTON (AP) – A majority of Democrats now think one term is plenty for President Joe Biden, despite his insistence that he plans to seek reelection in 2024, according to a new poll from The Associated Press-NORC Center for Public Affairs Research. It shows just 37% of Democrats say they want Biden to seek a […]
WASHINGTON STATE・1 HOUR AGO
WJBF

President Biden said on Saturday that he had ordered the military to down the balloon “as soon as possible” after he was briefed on the matter on Wednesday.
MONTANA STATE・1 DAY AGO
WJBF

The beloved White Columns Inn that used to be an attraction for near and far travelers in Thomson is gone. The demolition happened last week after it was announced in October 2022.
THOMSON, GA・3 DAYS AGO
WJBF