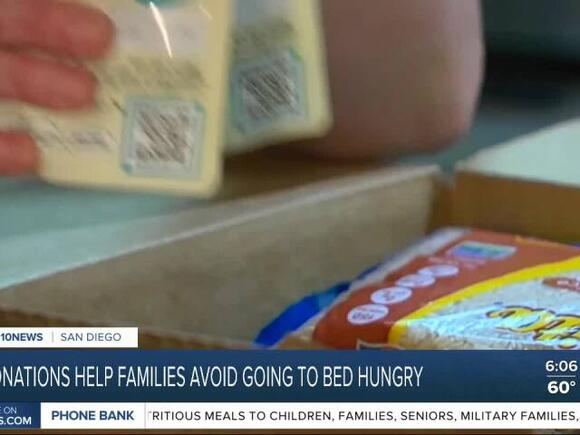 Like any mother, Melissa Howrey would do anything for her three children, but earlier this year she needed a little help to make sure her family had what they needed, including enough food to make their meals.

“We got COVID and so I was out of work for a little bit” explains Howrey.

Being out of work meant no income while the family recovered and as a single mom, she had no choice but to ask for help, which came from Feeding San Diego. A program Howrey says made her life easier.

Since connecting with Feeding San Diego, Melissa is able to get enough food to cook delicious, healthy meals for her family, including six-year-old Zoey.

Howrey says without the help, the last few months would have been much harder.

Feeding San Diego does regular food distributions and Howrey has found it so valuable, she's encouraged others to go with her.

She says the distributions always have a large turnout, making her think some San Diegans don't really know how many go hungry every night.

Marc Glazer says he noticed a sinkhole near his property line in June of 2021. Despite repeated requests, he says the City of San Diego has not made progress towards fixing the problem.
SAN DIEGO, CA・3 HOURS AGO
ABC 10 News KGTV

Just in time for Valentine’s Day, OpenTable released its list of their 100 Most Romantic Restaurants in America for 2023 -- and three San Diego eateries are getting tons of love from reviewers.
SAN DIEGO, CA・7 HOURS AGO
ABC 10 News KGTV

Biden's visit is part of a California trip in support of the administration's efforts regarding cancer treatment and initiatives for military and veteran families.
SAN DIEGO, CA・3 DAYS AGO
ABC 10 News KGTV

After her high school friend died unexpectedly in August, Randi Wittak made dozens of bears from her friend's clothing.
BONITA, CA・1 DAY AGO
ABC 10 News KGTV

Lunar New Year celebrations are continuing to happen throughout San Diego this weekend and people who are looking for something to do can take advantage of half-prices at local museums this month.
SAN DIEGO, CA・5 DAYS AGO
ABC 10 News KGTV

A female passenger was ejected and killed, and the driver was arrested in a single-vehicle crash on a downtown San Diego street early Monday morning.
SAN DIEGO, CA・14 HOURS AGO
ABC 10 News KGTV

Residents say they didn't receive any notice before a series of loud 'bangs' and military helicopters that landed near Liberty Station.
SAN DIEGO, CA・5 DAYS AGO
ABC 10 News KGTV

The breach affected patients who paid a bill or invoice through the online payment service between August 12, 2021 and January 12, 2023.
SAN DIEGO, CA・5 HOURS AGO
ABC 10 News KGTV

A red panda at the San Diego Zoo managed to briefly escape from an enclosure over the weekend, but zoo officials said the animal came down from a tree on its own.
SAN DIEGO, CA・6 DAYS AGO