China wants US not to interfere in ties with India - Pentagon 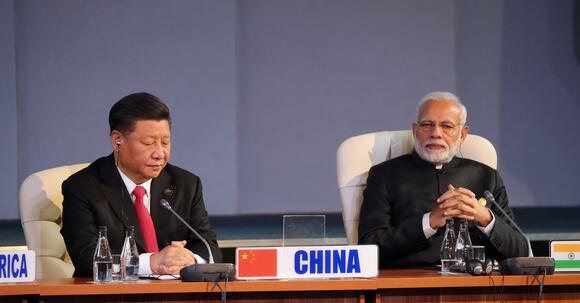 NEW DELHI, Nov 30 (Reuters) - China has warned the United States to not interfere in its relationship with India following deadly border skirmishes between the Asian giants in 2020, the Pentagon said in a report.

Ties between India and China have nosedived since the worst border clashes between them in 45 years killed 20 Indian and four Chinese soldiers. Deployment of troops has remained high on their Himalayan border since then, though India's imports from China have surged.

India is part of the so-called Quad alliance with the United States, Japan and Australia that aims to keep China's influence in the Indo-Pacific region in check.

"Throughout the standoff, PRC officials sought to downplay the severity of the crisis, emphasising Beijing’s intent to preserve border stability and prevent the standoff from harming other areas of its bilateral relationship with India," the U.S. Department of Defense said in a report to Congress released on Tuesday, referring to the People's Republic of China.

"The PRC seeks to prevent border tensions from causing India to partner more closely with the United States. PRC officials have warned U.S. officials to not interfere with the PRC’s relationship with India."

Chinese foreign ministry spokesperson Zhao Lijian did not mention the Pentagon report during a daily news conference on Wednesday. He said, however, this month's U.S.-Indian joint military exercises not very far from the Chinese border, in the northern Indian state of Uttarakhand, were "not conducive to the trust between India and China".

Brahma Chellaney, a defence and strategic affairs analyst in New Delhi, said China was able to "advance its interests" by playing down its military stand on its Himalayan frontier while shielding other areas of its relationship with India.

"Downplaying its aggression, ironically, also aids India's efforts to save face," he said on Twitter, referring to criticism within India about its response to China.

Believe nothing that the CCP says. They're very SHREWD & CUNNING. You Only Have To Look At Their Actions(Mao's Cultural Revolution, Tibet, Hong Kong, Xinjiang, Indian Border, etc.). This MONSTER must be watched & held in check by all Western & Eastern Democracies. Also we must De-Couple our Economies from them & Stop transferring All Of Our Technology & Wealth to Them.

China is in no position to dictate what the U.S.or other foreign countries in the region and around the world should or not do in that region of the world

China. Always with the warnings. Xi ping ding really thinks the world is his to dictate and everyone should do what he says.

The US Government ordered the Pentagon to destroy the alleged Chinese spy balloon. The US Air Force shot down the balloon with a single missile as it drifted over the Atlantic Ocean. China hit back at the decision, threatening a strong retaliation. YEREVAN (CoinChapter.com) — Over the last few days,...
MONTANA STATE・1 DAY AGO
Reuters

BEIJING/WASHINGTON (Reuters) -Beijing on Monday urged Washington to show restraint as the U.S. military searched for remnants of what it believes was a Chinese surveillance balloon it shot down over the Atlantic but which China says was a civilian craft that accidentally drifted astray.
WASHINGTON STATE・15 HOURS AGO
Deseret News

ISTANBUL, Feb 4 (Reuters) - The United States warned Turkey in recent days about the export to Russia of chemicals, microchips and other products that can be used in Moscow's war effort in Ukraine, and it could move to punish Turkish companies or banks contravening sanctions.
2 DAYS AGO
Reuters

BEIJING/HONG KONG, Feb 5 (Reuters) - China may respond to the U.S. shooting down its suspected spy balloon after warning of "serious repercussions", but analysts say any move will likely be finely calibrated to keep from worsening ties that both sides have been seeking to repair.
CALIFORNIA STATE・1 DAY AGO
CNN

Former CIA and FBI official Phil Mudd discusses whether the US overreacted to the suspected Chinese spy balloon that hovered over the nation for days before the US military shot it down.
1 DAY AGO
Newsweek

Igor Girkin predicted a "power struggle with unpredictable consequences" if Vladimir Putin died or stepped down as the Russian president.
9 HOURS AGO
Reuters

NEW DELHI, Feb 6 (Reuters) - The crisis engulfing the Adani Group intensified on Monday as hundreds of members of India's opposition parties took to the streets to press for a probe into allegations by a U.S. short-seller against the conglomerate which triggered its market rout.
16 HOURS AGO
Reuters

LVIV, Ukraine, Feb 5 (Reuters) - President Volodymyr Zelenskiy revoked the citizenship of several former influential politicians on Saturday in the latest of steps to "cleanse" the country from pro-Russian influences.
2 DAYS AGO
Business Insider

"Hard power is a reality," US Army Gen. Christopher Cavoli said in January. "If the other guy shows up with a tank, you better have a tank."
1 DAY AGO
RadarOnline

Vladimir Putin’s forces are starving in Ukraine and are forced to survive on only potatoes, onions and instant noodles cooked using the back ends of rockets, RadarOnline.com has learned.In a surprising development to come as Russia’s death toll recently surpassed 500,000, one Russian soldier spoke out to reveal the Russian military’s food situation has not changed even 12 months after first invading Ukraine in February 2022.Even more shocking was recently released footage of a Russian battlefield kitchen that indicated Putin’s soldiers are struggling to survive as their options for food and nutrients are severely limited.That is the revelation shared by...
17 HOURS AGO
Reuters

OTTAWA/TORONTO, Feb 6 (Reuters) - China's rapid reopening is likely to fuel demand for commodities produced in abundance by Canada, potentially helping Canada's economy avoid a recession as long as it does not also force up inflation and spur further interest-rate hikes.
13 HOURS AGO
Reuters

TAIPEI, Feb 7 (Reuters) - Almost half of companies surveyed by the American Chamber of Commerce (AmCham) in Taiwan are revising or plan to revise their business continuity plans amid tensions with China, while a growing number reported being impacted by those strains.
42 MINUTES AGO
Reuters

The sheer scale of the devastation of the earthquake and its aftershocks can be seen in social media photos and videos posted by people in Turkey and Syria. Eyewitnesses have also been speaking about what happened. BBC News has been pulling together and verifying information. The tremors of the main...
17 HOURS AGO
Reuters

SAN JOSE, Feb 6 (Reuters) - China apologized to Costa Rica for a balloon that flew over its territory, the Central American country's government said on Monday, after a separate suspected Chinese spy balloon traveling over the United States sparked a major political and diplomatic spat.
7 HOURS AGO
Reuters

U.S. cautions citizens in Sweden over possible attacks in retaliation for Koran burning

WASHINGTON/STOCKHOLM, Feb 6 (Reuters) - The U.S. embassy in Sweden has warned Americans in the country of possible retaliatory attacks in response to an incident where a far-right politician burned the Koran.
12 HOURS AGO
Reuters

TAIPEI, Feb 7 (Reuters) - Taiwan will speed up development of drones for military use taking into account the lessons of the war in Ukraine and the threat posed by China, the island's defence ministry said on Tuesday.
1 HOUR AGO