No. 3 Virginia Escapes Ann Arbor With 70-68 Win Over Michigan 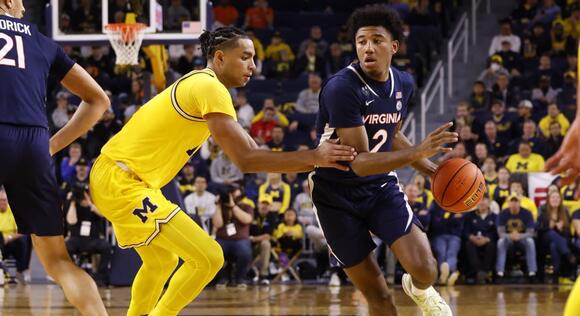 Facing a hostile road environment and a seemingly endless stream of adversity, the Cavaliers faced several moments that all seemed to send the same message: "it's just not your night."

A Michigan team that came in shooting under 32% from beyond the arc made seven of 13 threes in the first half and led by 11 points at halftime. Virginia's leading scorer, Armaan Franklin, made just one shot and was held to only two points. Reece Beekman scored 15 points in the first half, but then suffered an ankle injury that significantly limited him in the second half. A nearly unstoppable Hunter Dickinson scored 23 points and his flailing elbow bloodied Kadin Shedrick's mouth and fouled the UVA center out of the game in one fell swoop.

With all of those factors taken into account, there were more than enough reasons and excuses to explain what appeared to be Virginia's first loss of the season.

Tony Bennett and the Cavaliers disagreed.

After a horrendous defensive first half that saw UVA surrender a season-high 45 points to the Wolverines, Virginia bounced back in a big way in the second half, slowly overtaking Michigan and making just enough clutch plays down the stretch to escape Ann Arbor with a 70-68 victory on Tuesday night.

Although Beekman was severely hampered by the ankle injury in the second half, he put on a show in the first half, scoring 15 points on 6/7 shooting and draining his only three-point attempt. That was all Beekman could do to try to keep the Cavaliers in it, as they were bombarded by the Wolverines' offense. Virginia's game plan early on was to double Hunter Dickinson in the post and force him to kick out to open shooters, relying on Michigan's subpar three-point shooting.

Unfortunately for the Cavaliers, they left the Wolverine shooters a little too open and they caught fire, draining seven threes in the first half. Three of those three-pointers came from 6'8" guard Jett Howard, who proved to be another matchup problem for UVA, tallying 15 points, 11 of which came in the first half.

Although he had only one personal foul, Kadin Shedrick played only 11 minutes in the first half, sitting on the bench for the last several minutes as UVA opted for a smaller lineup featuring Ben Vander Plas at center.

Shedrick was an immediate difference-maker to start the second half. A three-point play from Shedrick helped Virginia go on a 7-0 run early in the second. After a Michigan basket, UVA answered with a layup from Beekman and a hook shot from Shedrick to narrow the deficit to just two points.

Then came the pivotal injury to Reece Beekman, who turned his ankle while contesting a jumper from Jett Howard. Beekman exited the game for two minutes to get his ankle taped and those ended up being the only two minutes that he missed in the entire game. He reentered the game, but it was clear that he lacked the explosiveness he had before and did not trust his ankle to sustain quick bursts of speed. Beekman would score only three points in the second half, but he still recorded three rebounds and four assists and was extremely important for the Cavaliers on the defensive end.

The double teams on Hunter Dickinson proved to be more effective with Shedrick as his primary defender and UVA was much better guarding the perimeter, with Michigan making only one three-pointer in the second half. But, Dickinson still caused some serious problems for the Cavaliers even when they did double him, making quick and accurate passes and drawing fouls on whichever UVA defenders were on him. A jumper from Jett Howard pushed the Michigan lead back up to six points at 58-52 with just over 10 minutes to play.

For the final ten minutes of regulation, Virginia held Michigan to just two made field goals. Kihei Clark knocked down four free throws and Ben Vander Plas scored inside as part of a 6-0 UVA run to tie the game. Another layup from Vander Plas gave the Cavaliers their first lead since early in the first half and then he splashed a pull-up three-pointer from the right wing. Vander Plas scored seven straight points to put UVA up 65-60.

Michigan wisely went right back to Hunter Dickinson inside to get back into the game. He drew a foul on Vander Plas and made both free throws and then tipped in his own miss on Michigan's next trip down the floor. A few possessions later, Dickinson swung his elbow into Kadin Shedrick's jaw. The refs reviewed the play, but determined that Shedrick was in Dickinson's cylinder, so the foul was on Shedrick, whose exit from the game was the definition of adding insult to injury as he was being treated for a bloody mouth when the refs officially assessed him with his fifth personal foul.

Dickinson made one of the two ensuing free throws to give the Wolverines a 66-65 lead with 100 seconds left. Both teams made a stop on defense and then Beekman fed a bounce pass to Jayden Gardner at the right elbow for an open jumper, which Gardner sank to put the Cavaliers back in front with 40 seconds remaining.

Beekman then came up with a clutch steal and was fouled on his way down the floor, resulting in technical free throws for Virginia. Beekman made one of the two technical foul shots and then Kihei Clark made a pair to make it 70-66. Hunter Dickinson got inside for a layup with six seconds left and then Michigan fouled Armaan Franklin, whose struggles continued as he missed both free throws to leave the door open, as the Wolverines had a chance to win the game with a three at the buzzer.

Jett Howard attempted to elevate for a three-pointer at the last second, but Reece Beekman stuck his hand in and jarred the ball loose on his way up. Jayden Gardner also came over and blocked Howard's desperation heave as time expired. There were some questionable calls made throughout the game, but the officials keeping their whistles silent on that final block was the right call as both Beekman and Gardner got all ball.

Gardner notched both the game-winning jumper and helped on the game-winning defensive play to seal the victory, capping an impressive 12-point, 11-rebound double-double performance for the 5th-year senior. Reece Beekman finished with a stellar all-around statline of 18 points on 7/10 shooting, five assists to just one turnover, four rebounds, and a steal.

Kihei Clark showed the value of his experience in close games like this, knocking down crunch time free throws and finishing with 16 points, four rebounds, and two assists. Ben Vander Plas finished with ten points on 4/5 shooting and Kadin Shedrick made five of his six shots to score 12 points before fouling out.

Those individual performances plus a fantastic second-half defensive showing allowed the Cavaliers to erase the 11-point halftime deficit and take down the Wolverines on their home floor to remain undefeated at 6-0 on the season.

This year marks the final edition of the ACC/Big Ten Challenge, so Virginia will finish with a 14-8 all-time record in the Challenge, including a 2-0 mark against Michigan.

Virginia returns home to face its first ACC opponent of the season as Florida State comes to JPJ on Saturday at 2pm.